PODCASTÂ Listen to it for FREE on iTunes or other podcasting services. Or click this link to listen to the show or download it directly from our satellite site

Looking north over Roosevelt Island, which cleanly splits the East River. Picture the buildings gone, the bridges wiped away, replaced with fruit trees and a small farm. The island has adopted several names over the years, including Minnahanonck (‘It’s Nice To Be Here’), Varkens Island (aka Hog’s Island), and Manning’s Island. 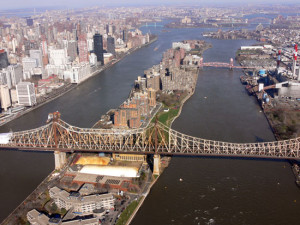 The penitentiary, opening on the now-named Blackwell’s Island in 1832, defined the next 100 years on the island — overcrowded, chaotic, inadequate facilities, grim and corrupted 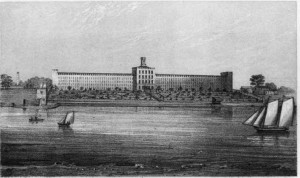 Another illustration of the prison, this from 1853, showing a rather unusual feature to its side: a garden, which would be kept by inmates to feed themselves 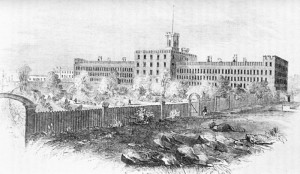 Food fight! Conditions inside the prison — as in most places on the island — were guided by mischief and chaos. Harpers Magazine 1860 (courtesy NY Public Library) 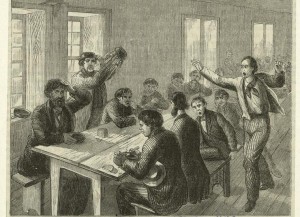 The Lunatic Asylum, aka ‘the Octagon’, became as overcrowded as the island’s prisons, often with people who would not have been considered ‘crazy’ today. Only two wings of the asylum were ever completed. Today, the Octagon is a luxury apartment complex. 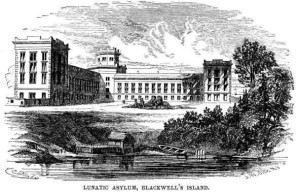 Intrepid reporter Nellie Bly exposed the wretched conditions within the asylum when she went undercover there in 1887. 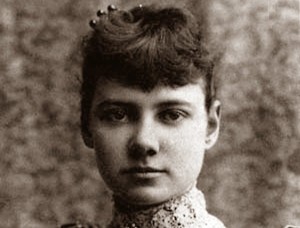 Male and female almshouses, catering to the homeless, the desperately poor and the elderly. Some residents would spend time at the penitentiary or work house, check out, and check back in here. (Images from here) 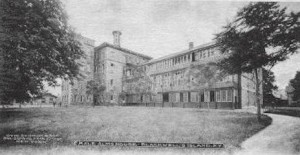 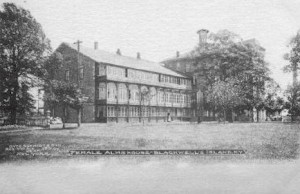 The Smallpox Hospital came to the island in 1856, a Gothic structure by James Renwick that saw thousands of diseased patients a year. 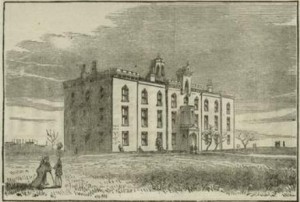 An illustration from 1868 expresses the dire scene at one of the island’s many hospitals. Confining all manner of sick and injured to one island might have been good for the general population, but was often a dangerous proximity for the sufferers, especially during epidemic time. 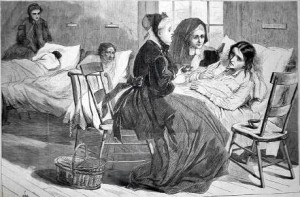 A dramatic change came in 1909 with the construction of the ‘Blackwell’s Island Bridge’, better known today as the Queensboro or 59th Street Bridge. A trolly stopped at the middle of the bridge, letting passengers off who then took an elevator down to the island. The elevator was dismantled by 1970. 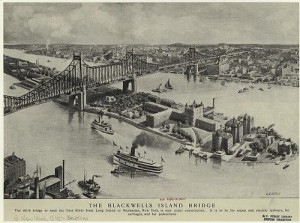 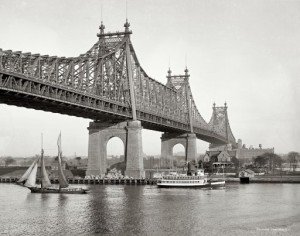 The workhouse, home to prostitutes and drunks, was also a popular place to dump protesters and labor reformers, as evidenced by this group of brave looking women. 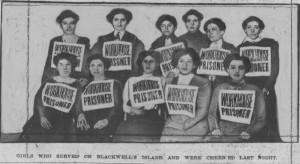 As Welfare Island, many of the major institutions would soon leave (to other New York islands) leaving on chronic care hospitals and a whole lot of abandoned property. 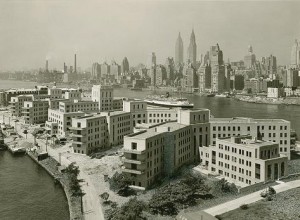 The Roosevelt Islamd Tram was an instant hit when it debuted in 1976, inspiring romantics and comic book writers alike. 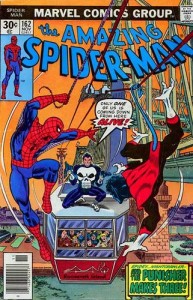 The haunting lighthouse at night, built by island inmates and still illuminating the East River, though the dangers of ships smashing against the rocks of Hell Gate are long gone. 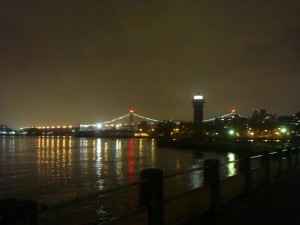 The Renwick Ruins still stand at the south end of the island, the former smallpox hospital still managing to give people a bit of a chill when seen close up (and preferably at night). 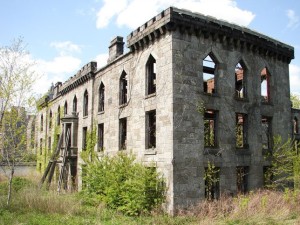 An extraordinary look at the island: in 1903, Thomas Edison made a short film using the island as a backdrop. The views include the lighthouse, the Octagon, the penitentiary and the construction work of what would become the 59th Street Bridge

You can find anything you want to know about Roosevelt Island at two excellent blogs, Roosevelt Islander and Roosevelt Island 360. The Main Street Wire, the RI community newspaper, has a great website with an exhaustive history timeline. And naturally, the always reliable Correction History, for all you prison history buffs, has some great info as well.

Click here for some prior articles we’ve written on this blog about Roosevelt here, include Charles Dickens’ visit to the island and an article about the late godfather of RI, ‘Grampa Munster’ Al Lewis.

Great job on the podcast.

Loved this podcast! One of my favorites.. Though you still haven’t made a bad one.. You guys rock..

I have been relistening to your old podcasts and just recently listened to this one. It was really fascinating and I have decided to put Roosevelt Island on my list of places to visit when I come to NYC eventually.. Coming from New Zealand so it takes a while to plan & save 🙂 loving the podcasts.. keep them coming