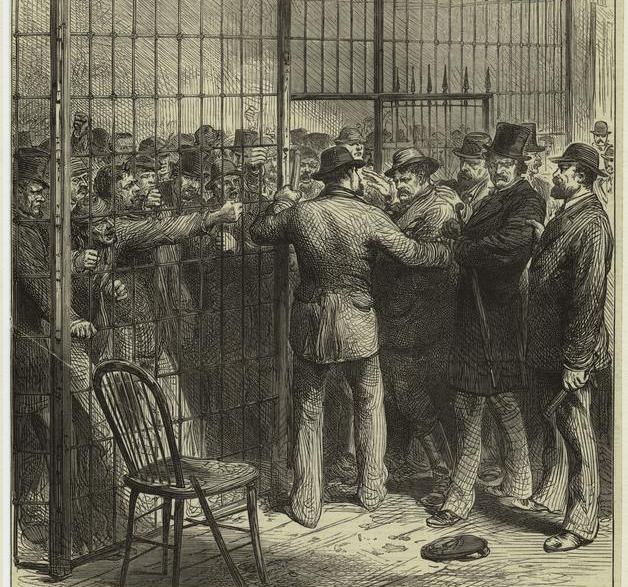 Ah, electioneering in the 1800s! You can smell the corruption in the air, the perfume of cigar smoke, the sweat of a street gang. Voting was easily manipulated by political machine bosses, and the techniques used — from voter intimidation to outright fraud — would sometimes inflate vote totals to absurd numbers in an effort to keep their party in power.

Here are just six of the most tried and patented techniques in vote manipulation in 19th century New York:

1. Using the names of children, the deceased or incapacitated people
You can find one example in an article in the Brooklyn Daily Eagle, December 29, 1893, about an election in Richmond Country (aka Staten Island), entitled Voting The Dead:

“Violation of the election laws in November was no less flagrant in Richmond County than in New York or Kings [Brooklyn]. Proceedings before Justice Cullen cast a significant light on the methods employed to reverse the will of the people.

At Castleton there were many votes cast on the names of dead men. Other ballots were deposited to the credit of the insane and bedridden. Inmates of the Sailors Snug Harbor who have not stirred out of doors for years are recorded as having voted.”

Children were also used, as in the election of 1860. “In one instance two boys of an Irish widow the one being six and the other seven years of age were registered without the knowledge either of the mother or sons,” according to the History Box.

2. Voting more than once
Either returning to your voting station multiple times wearing a variety of costumes, or simply going to other voting stations and hoping they don’t notice. (A pretty likely occurance in the mid-19th century.)
Below: From an Ed Sears woodcut, entitled “Arresting A Pretender,” 1870 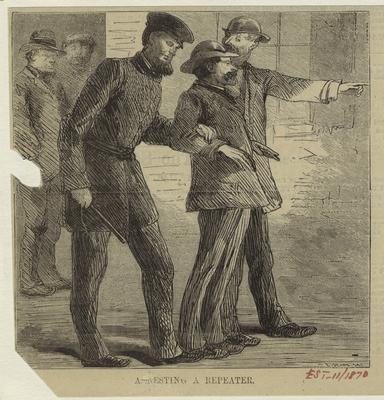 3. Faking illness to make your vote public
In being able to prove they voted a certain way, corrupt voters would receive cash bribes. From the same Brooklyn Eagle article as above: “Over fifty of those who actually went to the ballot box pretended that they were physically incapacitated and required the assistance of ‘workers’ to prepare their tickets. The effect was to destroy the secrecy of the vote and enable them to carry out their compact with the machine bosses. Dr. Joy, surgeon at the harbor, testifies that the inmates in question really needed no assistance. The inference is that they were bribed to support the ringsters who conspired to maintain their supremacy by unlawful means.”

4. Everybody gets to vote!

Oh, not women of course. But in a rush to get eager new Irish male voters to the polls, in 1868 Tammany appointed judges would grant citizenship (and a right to vote) to immigrants right off the boat, if they promised to vote Democratic. “The New York Supreme Court along cranked out more than sixteen hundred naturalizations each day, in additions to hundreds more from the Superior Court and the Court of Common Pleas.” [from Kenneth Ackerman’s Boss Tweed bio] Meanwhile, out on Coney Island, charming John McKane would register hundreds of the resort destination’s seasonal workers as residents, as means to voting his way.

But who cares what the votes actually say? Just rig the count, either sabotaging or bribing vote counters or positioning your own machine cronies into the positions to do the dirty work. Those vote counters uncorrupted and above reproach would become victim to physical intimidation and even power outages. On one occasion, in 1868, the lights went off and ‘ruffians’ sauntered in and simply purloined the objectionable votes.

6. Or, when all else fails, just destroy the ballots
As evidenced below in an Ed Sears woodcut, entitled “Tipping Over A Booth,” 1870 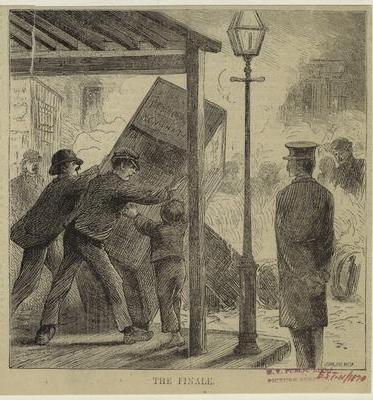 1 reply on “How to win a New York election, in six easy, illegal steps”

Well, that were some great tips! Wonder if they were useful today.