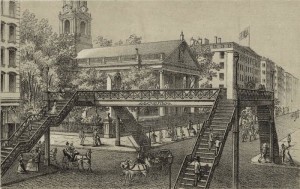 The bulky and yet somewhat elegant contraption above is the short-lived Loew Bridge, which once hung over Broadway at Fulton Street back in 1867 and 1868, an early cast-iron pedestrian bridge at one of the busiest intersections in the city. It was named not for its architect, but for the comptroller of New York at the time, Charles E. Loew.

Crossing the street was indeed a challenge then, in an era of no traffic lights and conveyances operated by horses. A couple blocks to the north lay the heart of city government and the publishing industry, not to mention St. Paul’s Church and the Astor House, New York’s finest early hotel. (Both are seen in the illustration above.) 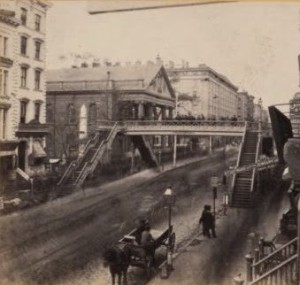 The bridge, which opened in April 1867, provided a respite to New Yorkers frustrated with dirty streets and impossible crossing options for pedestrians. One fanatic was even inspired to pen a lengthy poem to its honor. Unfortunately, it was not popular with surrounding business owners, particularly the one at 212 Broadway. That storefront, the hatter of one Charles Knox, was obscured by the bridge’s latticework and decreased business opportunities, he alleged.
It seems unusual that one businessman would be able to effectively crumble a new bridge to the ground, but Mr. Knox had the city’s sympathies. Two years earlier, his original shop had been destroyed in the same fire that incinerated Barnum’s American Museum. However he managed to unite some business owners of the area and eventually “brought suit against the city for $25,000 damages.” [source]
Most likely, Knox was more concerned with the belief that he was losing business to a rival hat shop across the street. (After all, to paraphrase a popular cliche, the hats are always cleaner on the other side.) Thanks to his efforts, the city ripped the bridge down less than two years after first erecting it, and citizens went back to their filthy and treacherous street crossings.
Back to square one, it seems. I think the situation is very well summarized in this letter from ‘B.’ to the New York Times, published on December 20, 1868:

“Taking down the Broadway Bridge appears to cause few remarks from the press, and when they have spoken they have rather been in favor of the removal.

“It appears to me the bridge, at certain periods was a great convenience, notwithstanding its needless height. When the snow slush is a foot thick, and the street blocked up with stages and trucks in a dead lock, it is a great accommodation to have a bridge to cross. It is almost impossible for women and children to cross Broadway, near Fulton Street, at such times; and if men get over it is at the risk of being covered with filth.
“Before the bridge was built, the writer has walked from Liberty Street to near Wall before getting across. At that time the papers were continually talking about ‘relief to Broadway”; but since the bridge was built, that has ceased. I think we shall hear it again on the first thaw after a heavy snowstorm, when crowds will be seen standing at the corners wondering how they will be able to get over the street.
“If the bridge is an injury to private property, the owners should be remunerated for the damage; not that a few shopkeepers, because their business is injured, or they think it is, should be the means of inconveniencing the whole public by having it removed.
“If that were the case with railroads, every farmer would have the power of stopping the road going over its land, because he thought it injured it — and there would not be a railroad in this country.”
Images above from the New York Public Library digital collection

1 reply on “The odd bridge over Broadway vs. Knox the Hatter”

“Loew Bridge” was built with “needless height” so that it would never be “Low Bridge”. Alas, it is now “No Bridge”.