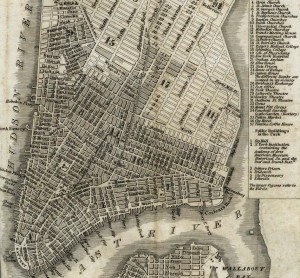 From H.S. Tanner’s ‘The American Traveller; or Guide Through the United States’, 1836 (book published book 1840)

Stuyvesant Street is mentioned as one of the few streets in New York that was allowed to break the grid, and its diagonal path between Second and Third avenues is a reminder of the original farm grid of Peter Stuyvesant. But as a few listeners have pointed out, it holds another unique distinction.

The original estate owners of Manhattan often carved up their own lands into the shape of small grids. For instance, the grid of the DeLancey farm is still impressed upon the Lower East Side below Delancey Street. The Stuyvesants also had a system of streets on their property that ran true east to west. (Manhattan is obviously not on a true north-south axis, and its grid streets do not truly run east to west, but progress at a slight diagonal. Charles Petzold has a very detailed article on the island’s true orientation.)

Thus, Stuyvesant Street is the only street in Manhattan that actually runs east to west. Walk its length with a compass and be amazed!

Not too far from Stuyvesant Street is the beginning of grid plan, First Street and First Avenue, Kramer’s “nexus of the universe”. This is the spot were near-uniformity along New York’s streets and avenues begins.

The southern border of the grid plan was, ironically, called North Street at the time, for it was truly north of the city. As I mentioned back in the Niblo’s Garden podcast, today’s Houston Street is actually the adjoining of two roads, the other being a path that cut through the property of Nicholas Bayard, land that is today’s SoHo. Bayard renamed his street after his daughter’s new husband, the esteemed Georgian patriot William Houstoun. Later, it made sense to link Houstoun’s street to North Street, and thus the whole thing was called Houston Street (with a ‘u’ vanishing in the process).
—–

The occasion of the Commissioners Plan is presents a good opportunity to peer into the extraordinary collection of old New York maps in the David Rumsey Collection. The original 1811 Randel maps are there, as well as others that chart the course of development during the 19th Century. This Tanner map from 1836 shows the grid progressing nicely.
—–

So, if I didn’t quite get it across on the show, let me say it now: Gouverneur Morris is awesome. I devoured two different biographies on the controversial Founding Father, and I highly recommended them both. Although Richard Brookhiser’s “Gentleman Revolutionary” is a breezier read, the quieter “Gouverneur Morris: An Independent Life” by William Howard Adams still makes room for some salacious details.
—–

And to repeat one major CORRECTION: Due to my complete misreading of my own handwritten notes and in the flurry of wrapping up the show, I said that Manhattanhenge occurs on March 28 and July 12 or July 13. I meant MAY 28, not March 28.