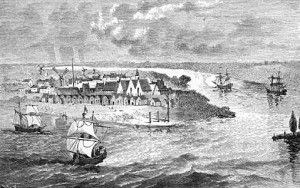 Nothing underscores the harshness of early New Amsterdam more than the notion that the Dutch settlement, which first formed at the tip of Manhattan in 1625, didn’t actually have a trained physician for almost twelve years.

Most likely, in these earliest years, medical emergencies were handled by ship surgeons and non-professionals skilled in a set of rudimentary practices. More practiced professionals eventually came, such as the man who can lay claim to being Manhattan’s first practicing physician Johannes La Montagne (also known as Jean Mousnieer de la Montagne), a Huguenot who arrived in 1637 and initially settled outside the colony in the village of Haarlem.

Johannes soon became “the only doctor in Manhattan in whom the settlers had any confidence,” practicing surprisingly sophisticated innovations in Dutch medicine.

Shockingly, before La Montagne, if one needed actual surgery, one went to the barber. According to one old history, “it might be remarked that at that time barbers were commonly looked upon as surgeons. Any skilled barber was likely to be applied to for surgical procedures.”

These ‘barber-surgeons’, adroit in “performing minor operations“, mostly worked on ships and were hardly skilled in the modern advances of 17th century medicine. Eventually La Montagne was able to regulate these barber-surgeons himself, issuing permits to those practicing in the colony and even those who sailed out of New Amsterdam ports.

Like the millions of doctors who would follow in his footsteps, Johannes would soon benefit handsomely from his expertise, gaining a vote in the first official voting council of the new colony under director-general William Kieft.

Johannes was also the first of many Manhattan physicians who was also versed in the art of networking; within a year he became Kieft’s right hand man and an extension of of the director-general’s wishes, however misguided. He even briefly took over a small farm (around the area of upper Central Park today) maintaining the production of tobacco.

Unfortunately, this devotion to Kieft and the desires of the Dutch West India Company over the needs of the colonists proved to help undermine the new colony, eventually leading to Kieft’s ouster and replacement by Peter Stuyvesant. To his credit, La Montague then won over the steadfast Stuyvesant, who kept him on as a member of his council.

He and his family stayed in the colony after its possession by the British, and it is believed to have spent the remainder of his life in Albany.  Today, descendants of the good doctor have set up their very own genealogical society.

This article originally ran on May 9, 2009. Original is here

I am a descendent of Jean Mousier de La Montagne and am interested in gaining more insight into the family history including the relationship between La Montagne and Peter Stuyvesant. La Montagne would be my 13th generation removed grandfather.

I am also a direct descendant of Jean de la Montagne. My grandmother was Margaret de la Montagne of NYC. I can be contacted at maryschmitt@rockisland.com

I am also a descendant of Johannes. I am one of many of the versions of his last name my understanding there’s at least 25 different versions