PODCAST Come fly with us through a history of New York City’s largest airport, once known as Idlewild (for a former golf course) and called John F. Kennedy International Airport since 1964. Mayor Fiorello LaGuardia wanted a new and improved facility to relieve the pressure from that other Queens airport (you know, the one with his name on it), but a greater challenge faced developers of the Jamaica Bay project — the coming of the jet age and the growth of commercial travel.

The solution for Idlewild was truly unique — a series of vastly different and striking-looking terminals assigned to individual airlines. This arrangement certainly had its critics, but it has provided New York with some of the most inventive architecture found within its borders.

From stained glass to zodiac sculptures, from the out-of-this-world dramatics of the Pan Am WorldPort to the strangely lifting concrete masterpiece by Eero Saarinen, we take you on a tour of the original ’60s terminals and the airportâ€™s peculiar history.

Click on the pictures below to enlarge. And these demand to be enlarged!

The Eastern Airlines building (“Terminal 1”) for the once-powerful airline that brought Robert Moses an early public defeat in the contentious battle for funding Idlewild Airport. 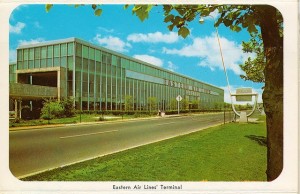 A large sequence of toadstool like concrete awnings adorn the entrance of Terminal 2, which serviced Northwest, Northeast and Braniff airlines. 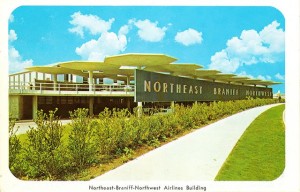 The spaceage Pan American terminal, later called WorldPort. These postcards are courtesy DavideLevine/Flickr. He’s got a great many more JFK postcards to check out as well. 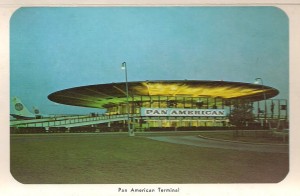 Overlooking the International Arrivals Building. From this vantage, you can see the ‘Versailles’ like gardens and fountain that briefly ruled the airport grounds until the demand for parking became too great. (avaloncm/Flickr) 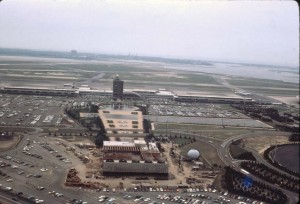 Outside the International Arrivals Building, 1960 (rjl6955/Flickr) 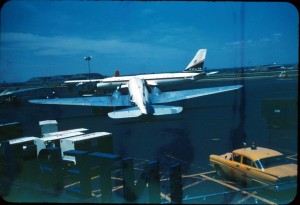 Inside and outside the TWA Flight Center, designed by Eero Saarinen. Pictures by Ezra Stoller 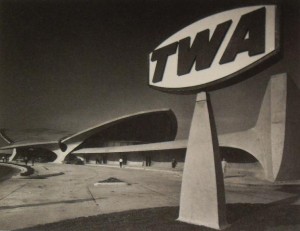 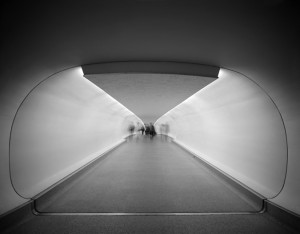 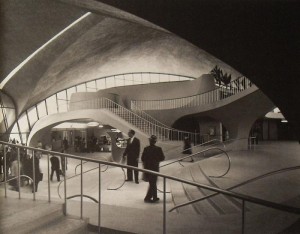 The interior of I.M. Pei’s Sundrome for National Airlines, with walls that seem to melt away with the sunlight. Currently unused, the building is slated to be demolished. 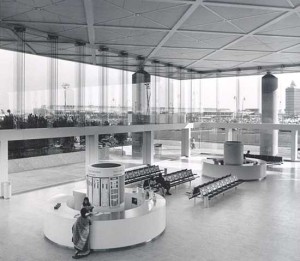 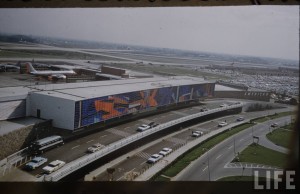 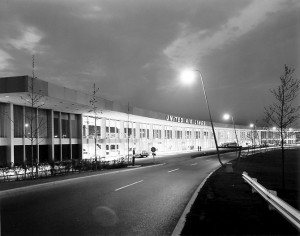 The style of the jet age was partially defined by airline flight attendants. Airlines used sex appeal in their marketing and garbed their female employees in trendy (and often revealing) uniforms. These women were graduates from Overseas National Airways training school in Queens, June 1966. (More information here.)

Idlewild/JFK would see as many movie and music stars than any other location in New York. Here’s Marilyn Monroe and Arthur Miller in 1954…

… and the Beatles arrive at JFK to screaming fanfare, 1964

7 replies on “Idlewild Airport/John F Kennedy International Airport: from a golf course to a motley crew of classic architecture”

Isn’t it about time to change the name back to Idlewild?

I TOTALLY AGREE!!!!!!
WHY CALL IT JFK AIRPORT? HE DIDN’T LIVE IN NEW YORK; HE ONLY SCREWED HERE!
CHEATING ON HIS WIFE, JACKIE.
IF ANYTHING, IT OUGHT TO HAVE BEEN CALLED, “MARILYN MONROE AIRPORT”.
AT LEAST SHE LIVED HERE!!!!!!!!
stuart

I would like to call it the LBJ-IRT-FBI-CIA-LSD International Airport because I love “Hair”!
Besides, Idlewild is a bar now…

Thoroughly enjoyed this history. I grew up in Rosedale/Laurelton, Queens in the 1960s. My dad used to take us to JFK to look at the architecture…like going to a museum. Your description is very accurate to what I recall. It felt to me like visiting the future and made me want to see the world. When my parents bought their house, in 1959 Idlewild was not yet a jet port, eventually when the big jets started flying, our closeness made the noise unbearable…it was before the days of regulation and alternating routes…we could literally see the bottoms of the planes as they flew over our house! Also, I have memories of being stuck in traffic on the way to visit our cousins in Bushwick on the Van Wyck…always a nightmare. Thanks for your show…loving it!

[…] airport on this map is the New York International Airport (Idlewild Field). It would be renamed after President Kennedy in December 1963. At the northwest tip is Jamaica […]

Good afternoon,
I was raised in New York and my parents took my brother and I several trips with them and they used TWA. I remember as a kid being so impressed by this incredible building walking down the long hallways to the airplanes, amazing. And today what they have done with this building kept the history of the building but turned into shangri la. Kudos for the architect and designer.
I want to buy a print of the original poster so I an frame it. How can oyu help me please.
Thank you
Richard Coleman

I want to buy a print of the building