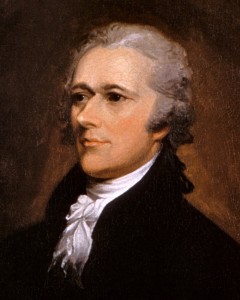 “A garden, you know, is a very usual refuge of a disappointed politician. Accordingly, I have purchased a few acres about nine miles from town, have built a house, and am cultivating a garden.” Alexander Hamilton, in a letter to South Carolina statesman Charles Cotesworth Pinckney, regarding Hamilton Grange

Today’s the birthday of Alexander Hamilton, New York’s greatest Founding Father (sorry, John Jay) and a man that embodied the best of American potential with the weaknesses of a modern politician. I continue to find him a fascinating, unusual, frustrating and remarkable historical figure.

The National Park Service is throwing a 257th birthday party for Alexander Hamilton this Saturday at the Founding Father’s old home Hamilton Grange, newly moved to St. Nicholas Park. There will be a local historian garbed as Alexander Hamilton. I will be there to get his autograph. Let’s get this party STARTED. [Read the flyer here.]

Fellow Hamilton-phile and ‘In The Heights’ creator Lin-Manuel Miranda asks a question I too have pondered: “Why hasn’t anybody done a hip-hop version of Alexander Hamilton’s life?” [New York Times]

If you’d like to take a little somber stroll today, it’s about a 40 minute walk from the spot near the Meatpacking District where Alexander Hamilton died to his eternal resting place in the Trinity Church Cemetery. Although he was famously shot by Vice President Aaron Burr in Weehawken, his mortally wounded body was taken to the home of William Bayard “just below the present Gansevoort Street. . . close to the present Horatio Street” where he died. There is a house at 82 Jane Street with a plaque that presumes to mark the spot as the place where Hamilton died, but this has largely been debunked. What is it with dead Founding Fathers and inaccurate plaques? (See: Nathan Hale)

In our third podcast — and the oldest one currently available for download — we spent some time discussing Mr. Hamilton.  Listen to it at your peril; we were very green at this podcasting thing back then. Also, my first proper post on this blog (dated July 5, 2007) was about Mr. Hamilton. Frankly, we do a much better job discussing a building that once served as Hamilton’s temporary Treasury office, in our podcast on Fraunces Tavern. And after you listen, go for a visit!

And for some American history laced with camp value, here’s some juicy scenes from the 1931 melodramatic biography on the life of Alexander Hamilton, starring George Arliss as the title hero. Interestingly, most of the cast is British.

1 reply on “To Mr. Alexander Hamilton, on his birthday”

Iâ€™ll immediately seize your rss feed as I can not in finding
your email subscription link or e-newsletter service.

Do youâ€™ve any? Please permit me know so that I may just subscribe.
Thanks.