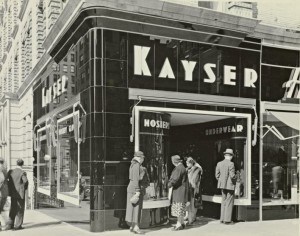 German immigrant Julius Kayser didn’t start off being so intimate with women. When he opened his first factory in 1880, he specialized in simple cotton gloves, and soon moved to the silken kind, the sort a proper woman wore to the opera or a masquerade ball. He even patented a ‘process for reinforcing fingertips’ which quickly made Kayser a rich man.

By 1913, Julius had expanded to hosiery, veils, swimwear and undergarments that were sold in all the most notable department stores. He employed a staggering 2,500 people in Brooklyn (in today’s DUMBO area and later in Clinton Hill**) and several other New York state plants, manufacturing not only standard ‘knit’ underwear but the more exotic ‘Italian silk underwear’.

Kayser brought his selection of women’s delicates to 545 Fifth Avenue in the 1930s, with a renovation a decade later that included an ‘extensive use of mirrors, both inside and outside the shop’. [source]

Further innovations — like the ‘nimble toe’ pantyhose — brought further expansion in the 1950s and a new three-story store at 425 Fifth Avenue and 38th Street, which featured a 1,200-seat ‘Theater of Intimate Apparel’ for fashion shows and a rooftop garden to display swimwear and outdoor fashions.

Kayser is still atop the women’s undergarment pile. The company joined with Chester H Roth in 1958, and the merged company Kayser-Roth debuts the affordable No Nonsense brand of undergarments in the 1970s. I’m not sure if the current company still makes silk gloves, which got them started in the first place.

**222 Taaffe Place, to be exact. I just wanted to say that because Taaffe Street is one of my favorite street names in New York for some reason.