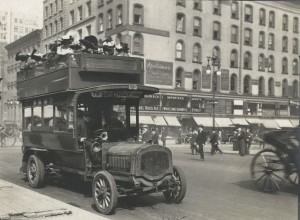 Ladies in their most decorative hats enjoy a sunny ride from a double-decker in the fleet of the Fifth Avenue Coach Company. Anybody recognize this street corner? There’s an advertisement for McMullen’s White Label Bass Ale, Guinness Stout, Appolinari’s mineral water on the building in the background. (Photo by Alice Austen, courtesy NYPL. Labeled 1896, but most likely much later, perhaps early-mid 1910s)


Sage Advice: Sixteen tips and observations from an opinionated 1916 New York tour guide. “Another characteristic of New York, and one that applies to all grades of society, is the lavish and conspicuous mode of dress adopted by New York women on the public streets” [Cenedella]

Evergreen: It’s Barbra Streisand‘s 70th birthday! Find out where she — and 19 other extraordinary female vocalists — got their start in New York’s hustling nightlife in an older 2010 post from this blog. [Bowery Boys]

On the Menu: Dying to go to the Howard Johnson’s restaurant depicted on last Sunday’s ‘Mad Men’ episode and partake of a big, BIG orange sherbet? The Plattsburgh location is closed, but The Retrologist takes you to an original restaurant that’s still open in Lake George. [The Retrologist]

The Wire: There are mysterious, almost invisible wires strung from lampposts all around the city. Ever notice them? [Slate]

Continuing Story: The latest on the embattled St. Mark’s Bookshop, one of the last independent bookstores in the East Village. [Jeremiah’s Vanishing New York]

And, now, big news! We are very happy to announce our involvement as blog ambassadors for the Partners In Preservation grant program, sponsored by American Express and the National Trust For Historic Preservation. Forty historical places in New York City have been chosen to compete for $3 million worth of funding. It’s a great chance for us to finally give back to some of New York’s most treasured places we’ve spent years talking about. And you can help choose the grant awardees. More information on that this Thursday! [Partners In Preservation]

3 replies on “History in the Making: Double Decker Delight Edition”

Folks can vote to help preserve the home of the late, Alice Austen, the photographer who captured this amazing image and many others of late 1800s – early 1900s New York City.

And come visit the Austen House to see many more images!!!

I love the Austen House — and I voted.

This great picture was taken by Alice Austen in 1910. Somewhere along the line it got mislabeled 1896, probably because that happened to be a very productive year for her. You can refer to the Alice Austen Museum website at https://aliceausten.org/fifth-ave-auto.