When the original trailer for Baz Luhrmann’s adaptation of F. Scott Fitzgerald’s ‘The Great Gatsby’ came out in May, I respectfully nitpicked its depiction of 1920s Times Square. That same article applies to the new trailer

The secret behind the ads, created by legendary ad man J.C. Leyendecker, was that the most popular Arrow Collar Man — model Charles Beach — was Leyendecker’s long-time lover and companion. The pair had lavish parties from their home in New Rochelle during the 1920s, parties which I imagine might have looked a bit like the ones in Luhrmann’s film. (Well, I can imagine they looked that way, that is.)

Below: Beach in a ‘satisfactory’ detachable collar 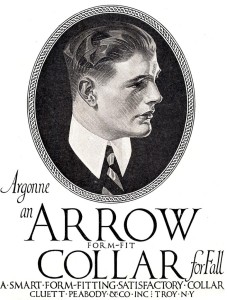