The wacky IKEA monkey story of the past few days got me to wondering about wild animals as pets here in New York. After all, the wealthiest classes collected all sorts of unusual beasts for their amusement during the 19th century.  So many in fact that the Central Park Zoo — or Menagerie, as it was called then — was created as a repository for all those unusual creatures abandoned by their owners. (The Central Park Zoo was the topic of one of our first podcasts, all the way back in August 2007!)

A bizarre New York Sun article from March 1907 found an interesting correlation between elegant women and their companion monkeys.  They were such hot commodities with finer New York ladies that year that the animals were almost considered luxuries. 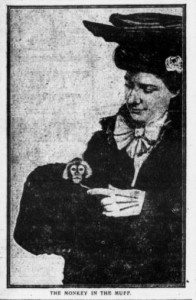 Monkeys rode snugly amid the elegant furs and finery of a modern woman.  “Out of ermine muffs, carried by smartly dressed women along Fifth Avenue, hideous grinning little faces peep out of you.”  The best examples of woman-monkey companionship were the talk of the town;  one New York lady had her monkey trained to “manicure himself, don the right clothes at the right hour, eat daintily with his fork, pretend to smoke his after dinner cigarette and go to bed in a little iron bedstead.”

At right: From the 1907 Sun article, a lady with her pet monkey (courtesy LOC)

“It is impossible to import enough monkeys to fill the present demand,” one animal importer told the Sun.  “An installment of marmosets or ringtails no sooner reaches port than they are shipped to women all over the country.”

It was an unorthodox but very charismatic choice, popular with actresses, princesses and rich ladies of a certain progressive bent.  The pet monkey was prepared to do the unthinkable in 1907 — replace the yapping dog as the woman’s preferred companion.  “To those who do not like monkeys, the popularity of the beast seems more objectionable than any other recent fad. The horse fad, the dog fad, the cat fad, the automobile fad, the ping pong fad, the bridge fad, the chameleon fad are more excusable to such people.”

The popularity of the pet monkey, once associated with immigrant organ grinders on the streets of Five Points in the late 19th century, arose from increased scholarship on the animal, from stories of African safaris, and from seeing them in action at the House of Primates in the Bronx Zoo.

The animals were brought over on trading ships, basketfuls scooped up off the coasts of South America or even as far away as South Africa. (A boatload of 1,000 monkeys arrived in New York in 1909, a cargo which also included hundreds of exotic birds and a couple dozen pythons.)  If they survived, they were given to importers throughout the city or sometimes sold right of the dock. 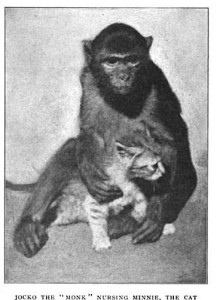 Monkeys even found themselves in the service of New York area fire departments. In 1907, a Mercer Street crew enjoyed the alertness of a monkey named Jenny (pictured below), who once warned her fellow firefighters of a blaze by tossing pool balls down an iron stairway.

And a fire crew in Rockaway Beach was well-known for their monkey mascot Jocko (pictured at left, with fellow mascot, kitten Minnie) who occasionally attacked Italian peanut vendors.

It seems impossible to comprehend how nonchalant pet owners were regarding disease and injury.  The Sun article runs through some helpful hints about how to personally select your monkey from a writhing litter right off the boat:  “If the skin is yellow do not invest your money, for you may be quite sure that the monkey has tuberculosis. If the skin is black the monkey has blood poisoning.”

Inevitably, the more untamed of these creatures did cause mayhem. In just one example from 1907, a Sixth Avenue monkey named Pete hurled flower pots at pedestrians, almost killing a woman.  On July 4, 1908, a Brooklyn, monkey named Nimbo set a house on fire by lighting fireworks.

And sadly, the monkey too soon fell victim to the inevitability of a passing fad.  By 1908, the New York Times was already proclaiming the Pomeranian as the new “hot” pet.

Below: From the Nov. 17, 1907 New York Tribune, Jenny the pool ball-hurling monkey mascot of the Mercer Street fire crew. 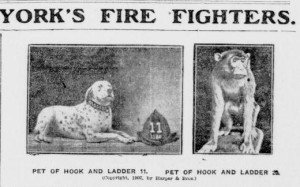 1 reply on “The New York monkey fad of 1907: From Fifth Avenue to the fire department, primates were fashionable companions”

Is this the thing what Karl Pilkington tried to talk about on the Ricky Gervais’ show?