Next week is the 100th birthday of the opening of the Woolworth Building.  The classic skyscraper designed by Cass Gilbert changed everything about perceptions of tall buildings in Manhattan — for good and ill.  Suddenly, towers could be as graceful and important as monuments, and as playful and enigmatic as castles.

New Yorkers were anxious to fill their downtown with glorious towers for business, to best their rivals in Chicago (where many of the finest architects worked) and to prove the city’s grandeur to the world.

To that end, the New York Sun on April 13, 1913, ran this curious map in their real estate section, under the header “Rebuilding of Lower Manhattan Progressing Slowly.”  The point of the section is clear;  lower Manhattan was filled with useless old, rundown buildings that needed to be replaced at once! 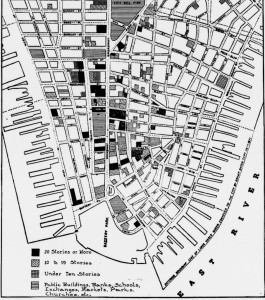 It was this push at the start of the 20th century that gives lower Manhattan its unusual character, with few buildings before 1890 still standing.  The ‘canyon’ of lower Broadway was beginning to develop by 1913, only to be further dramatized with taller, more dramatic structures in the coming years.  The height of the structures along Broadway and around Wall Street soon eclipsed those structures on Park Row and most of the early skyscrapers built further up Manhattan, around Madison Square.

Some of the buildings lining Broadway before 1913 included: 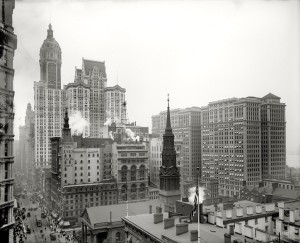 The Manhattan Life Insurance Building (64-70 Broadway), the tallest building from 1894-99 (pictured here in 1895) There’s an entire blog devoted to his building. Pic is from there. 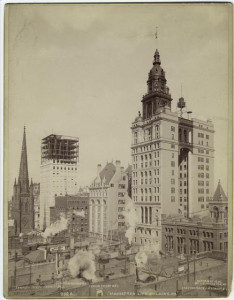 The building being constructed in the photo above is the American Surety Building (100 Broadway) which is still standing today.  The building was constructed in 1896.  In the background you can also see another mighty skyscraper, the very Venetian-styled Bankers Trust Company Building (14 Wall Street), finished in 1912. (Pic courtesy LOC) 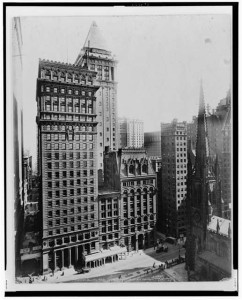 And the Trinity Building (111 Broadway), completed in 1907, also still around today.  It replaced a five story office building from 1853 that had been designed by Richard Upjohn. (LOC) 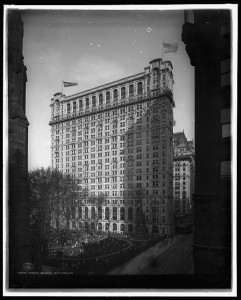 I love that most of the above buildings can be seen in relation to Trinity Church (79 Broadway), once the tallest building at 284 feet.  (Pictured below completely surrounded by skyscrapers by 1916, picture courtesy LOC) 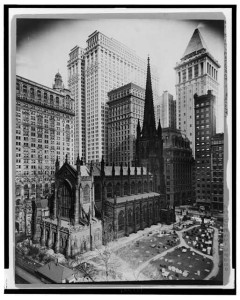 All of these buildings pre-date the Woolworth Building and, of course, the 1916 Zoning Resolution that required architects to build setbacks into their designs.  In fact, in the photo of Trinity above, you can see the principal reason the zoning law was enacted — the colossal Equitable Building, finished in 1915.

Next week: More on the 100th anniversary of the Woolworth Building!

You can read the New York Sun section from April 1913 here.