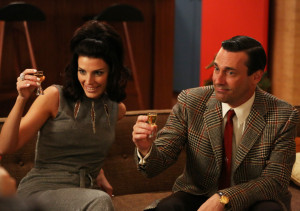 Drinks with the Drapers: we may see the end of 1967 in the opening episode. (courtesy AMC)

‘Mad Men’ Season 6 begins this Sunday 9EST.  If you’re a fan of late ’60s New York and American pop culture from that period, follow along with me on Twitter at @boweryboys.  As I do with ‘Boardwalk Empire’ and BBC America’s ‘Copper’, I’ll be doing running historical commentary featuring details from the episode.

Don’t worry, I won’t spoil any significant plot points (in case you’re watching later).  There won’t be any Tweets like “The gun Joan uses to shoot Draper with is an Anschutz 164, a ’64 original from J.C. Penney.”  Perhaps more like “Before the 1968 Gun Control Act, it was possible to buy firearms at retailers like J.C Penney and Sears.”  (That’s actually a real gun, but no, I don’t think Joan shoots Don Draper.)

Below: In case you’re worried about spoilers, here’s some examples of Tweet from the a May episode from last season: 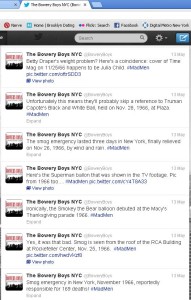 Our thanks to the New York Observer for including us in their roundup of favorite NYC-centric podcasts!  We’re on the list with Alec Baldwin, Julie Klausner and Ophira Eisenberg’s ‘Ask Me Another’, so we’re honored to be included. [NYObserver]

The Bowery Boys Book of the Month for April will be revealed on this month’s podcast with a review and an interview with the author next week.  Have you checked out our first two selections from February (Sailor Twain: Mermaid On The Hudson) and March (The Measure of Manhattan)?

The latest trailer for ‘The Great Gatsby’ reveals new shots of old New York, including The Plaza and Central Park:

And our big Episode #150, coming up tomorrow!  Bringing back a tale of rivalry between Manhattan and Brooklyn….