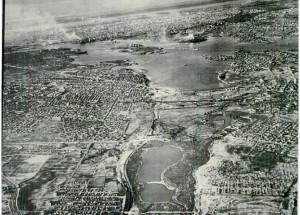 Ah, take in the horrid reality of the Corona marshes with their ashes, manure and garbage! (Courtesy CUNY)

Outside of probably Hell, there is no literary landscape as forlorn and soul-crushing as the ash dumps of Corona, Queens.

“This is the valley of ashes,” writes Fitzgerald in The Great Gatsby, “a fantastic farm where ashes grow like wheat into ridges and hills and grotesque gardens; where ashes take the forms of houses and chimneys and rising smoke and, finally, with a transcendent effort, of men who move dimly and already crumbling through the powdery air.”

The Corona ash dump was a stain on Queens every bit as real as Fresh Kills landfill would later be on Staten Island, a repository for the detritus from Brooklyn coal furnace that created crud-caked mountains amid a salty marsh.

The salt marshes sat relatively untouched, along with other large stretches of the newly formed borough. The Brooklyn Ash Removal Company moved here in 1909 after it outgrew its dumping grounds on a small island in Jamaica Bay named Barren Island.  (The island no longer exists per se; landfill connected it to the mainland and Floyd Bennett Field was built there in 1930)

Below: A sanitation worker carting carting away a full barrel of ash. The open cart would be filled, taken to barges, then sent to far-away dumps. In the 1910s, Brooklyn ash went to Corona. {NYPL} 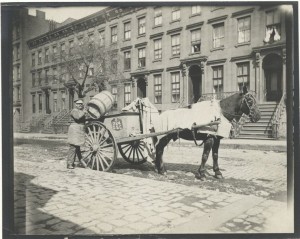 With the increase of coal-burning furnaces in the late 19th century, the city had yet another sanitation crisis sullying the streets.  Even by 1910s, New York was trying to clamp down on the situation — literally — attempting to get residents and private businesses to cover their ash carts and containers “as to protect pedestrians from the annoyance of flying ash dust.” [source]

In Queens, mountains of choking, awful ash made for poor living conditions for neighboring Corona on one side, Flushing on the other.  It was a constant eyesore for early commuters, as the Long Island Railroad went right past it, as did the main thoroughfares of northern Long Island — roads taken by many of the wealthy ‘Gold Coast’ families.

One ash pile was so large — almost 100 feet — that it was christened Mount Corona.  And of course it wasn’t just ash; barges filled with animal manure docked here as well, awaiting local farmers who used the waste as fertilizer.

And new menace was introduced in 1920  — an infestation of rats. “War Declared Upon Rats,” declared the New York Times. An army of exterminators were sent to wipe out the colony of rats that lived among the ashen meadow dumps.

Below: From 1897, loading a scow full of ash to be taken to the local dump (NYPL) 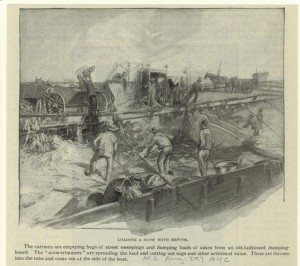 Believe it or not, the Brooklyn Ash Removal Company tried to convince residents that presence of the grim, brimstone terrain next to their homes was getting rid of pests. When they were taken to court in 1923, “charged with permitting dense smoke to issue from the dumps,” they claimed the dumping grounds were good for the salt marshes, as they helped rid the neighborhood of mosquitoes!

With the population of Queens almost doubling during the 1920s, it seemed the days of the Corona Ash Dump were numbered. Enter Robert Moses, with his dreams of a large and spectacular park for the growing borough.  He swiftly moved in, bought all the marshland, all the mountains of ash, and filled in wetlands and the dark hills to create Flushing Meadows-Corona Park.  If you’ve been to Citi Field or the Billie Jean King Tennis Center, then you have sat upon land that was once the Corona ash dumps.

NYC had aerial maps taken starting in 1924. They can be found here: http://maps.nyc.gov/doitt/nycitymap/

Click on the camera icon and slide the pointer below it to the year you wish to see. The ash dump can be clearly seen in 1924 and its transformation into the 1939 World’s Fair in 1951.

Changes to Barren Island, and the surrounding salt marshes along the southern shore of Brooklyn and Queens are monumental in this same time frame.

Thank you for sharing the link to that map. I love it.