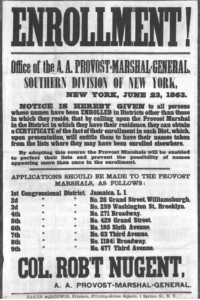 A list of the nine draft offices where lotteries would occur that Monday, July 13th. It would have already begun in Jamaica and at the Ninth District Office that Saturday.

One hundred and fifty years ago today, on July 11, 1863, the first round of lotteries to select able-bodied men for conscription into the Union Army began rolling out in New York.

It was a Saturday.  The day of the week is rather important to history. For on that day — the day that brought the draft that would inspire the horror of the notorious Draft Riots 48 hours later — the draft lotteries would arrive without violence.  Nobody in New York would die that day because they were following federal orders or because of the color of their skin.

Below: The draft in New York in simpler times.  When a draft lottery was called two years earlier, in 1861, there was no such tension or violence.  A spirit of patriotism and a lack of cynicism about the war greeted the provost marshals as names were selected. [NYPL] 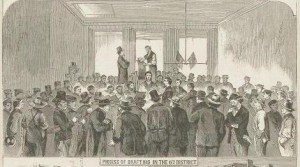 A few factors went into this surprising peace. Federal and state law enforcement knew there would be some trouble. The newspapers had grumbled about it and anti-draft factions gathered in halls around New York in the preceding days. Draft riots had already erupted in places like Buffalo, New York.

As a result, they decided to roll out the draft slowly, starting in less densely populated areas.  Thus, the first names were read out from the Ninth District draft office at Third Avenue and 46th Street which, in 1863, was neither the most fashionable neighborhood, nor the most squalid.  Being first, however, made it a prime target for agitators when it reopened on Monday.

Anger in New York was delayed.  Many assumed that a Democratic controlled state government and its Democratic governor Horatio Seymour would delay or even block the draft.  Many of those leaders campaigned on that very fact.  Yet as the ‘wheel of misfortune’ was turned that Saturday morning and names were selected for the draft, the horror began to sink in.

Below: The 69th Regiment leaves New York harbor, April 1861.  A largely Irish regiment, they are one of New York’s great military units.  They were so decimated during the Battle of Fredericksburg and the Battle of Gettysburg — which took place just two weeks before New York’s draft — that they were temporarily disbanded. 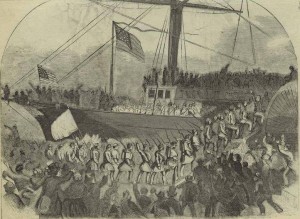 This is why Saturday is so important — the gestating anger that led to the draft riots that Monday broke out in the taverns of lower Manhattan that Saturday night, as news spread of friends and loved ones in other districts whose names had been chosen.

James Gordon Bennett of the New York Herald wrote: “Those who heard the scattered groups of laborers and mechanics who congregated in different quarters on Saturday evening, and who canvassed unsparingly the conscription law might have reasonably augured that a tumult was at hand.” [source]

In typical understated fashion, the New York Sun remarked, “Considerable feeling and warm discussion was manifested throughout the city as soon as it became generally known that the draft had actually commenced.”   Those words were published on July 13, the first and most incendiary day of the draft riots..

Had the draft actually proceeded without incident, those chosen would have received the following letter, reprinted in the same issue of the New York Sun mentioned above: 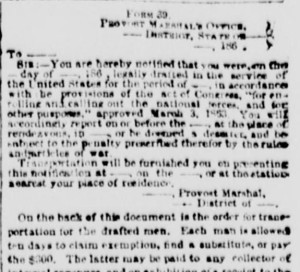 If you were chosen for the draft, you would have had ten days to “claim an exemption**, find a substitute, or pay the $300” commutation fee. Barring that, you were to report to Rikers Island for immediate training.

Prepping from some dissension on Monday, five hundred soldiers from Governors Island were summoned into the city to stand guard over the draft offices. Little did they know then that a mere 500 men would be no match for the surge of rabid mobs that would greet them on Monday.

** What were the various draft exemptions? The July 13, 1863 issue of the New York Daily Tribune had a list available for its readers which included 1) being the son of a widow or ailing parent; 2) being the only brother of a child dependent on him for support; 3) being the only parent to children under the age of 12; 4) having two family members already serving in the Union army; and 5) “unsuitableness of age,” meaning you were too old or too young to serve.