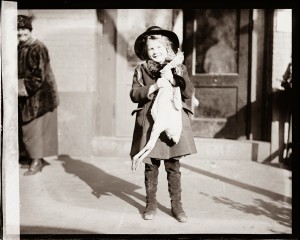 Hopefully this young lady acquired this turkey by legitimate means.

In this week’s podcast, I feign shock at the wild party held at the old home of famed actress Charlotte Melmoth, a former school for etiquette-turned-booze hall.  To quote historian Henry Reed Stiles directly:

What’s so indulgent about a raffle?  Today they’re used mostly in expos and high school fund-raisers, a relatively benign form of gambling (although governed by specific state-wide rules).  But in the 19th century, raffles were widely seen in saloons, a jovial excuse for men to get liquored up and throw their money in for a chance at a moderate prize.  In essence, it was gambling most fowl. 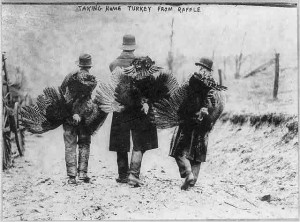 “[T]here are many men on this fast old planet who are unable to resist the seductiveness of a turkey raffle,” the New York Sun reported in 1891.  “[P]erhaps there are enthusiasts who regard the practice of turkey raffling as not gambling, but a spirited method for the distribution of food products.”

The most common form of turkey raffle involved a game of dice.  Men paid for the privilege of rolling a pair of dice three times, and the man with the highest total score took home the turkey.

Another popular raffle method involved tossing several pennies into a hat, then dumping them out on a table.  The man who had the most pennies to come up heads would get his choice of the turkey or its cash equivalent. (Author Andrew Smith reports of one such raffle with a turkey value of 4 shillings, an approximate value of $10-$20 today.  Most took the money.)

Raffles were a quick and easy way for bartenders to get patrons to drink more. In this way, they’re very much like a weekly karaoke party or a pub trivia night.

Below: Geese also got into the game. This great 1837 painting is by Long Island artist William Sidney Mount, called “The Raffle (Raffling For The Goose).”  The scene takes place in the backroom of a tavern, the hat containing raffle tickets.  Today this painting hangs at the Metropolitan Museum of Art. 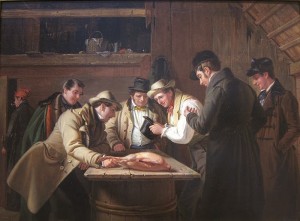 A November 1887 account in the New York Evening World (reprinting an article from Buffalo) recounts the tale of a bank teller who won a six-pound turkey in a bar raffle:

“[H]is friends, many of whom he had never met before, crowded around him and congratulated him.  Then they swarmed him over to the bar and, of course, it was necessary to order some slight liquid refreshment for the gentlemen who felt some amicably disposed to him.  One hundred and fifty lagers were quickly disposed of, and the bank teller waxed hilarious.  Taking the turkey by the legs he swung it around his head in triumph……. Before he had left the place he had paid for $20* worth of liquor.”

*According to the Inflation Calculator, that’s about $500 today.

The reputation of the turkey raffle as an instrument of vice and debauchery was such that a 1914 article in the New York Sun heralded their demise. “It has long been suspected that this form of gambling was ruining men and wrecking homes.”

Turkey raffles were finally outlawed in New York bars in 1914.  “That kind of chance taking is now classed as gambling, and every holder of a liquor license is forbidden to allow it in his place.” [source]