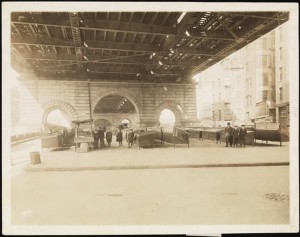 Setting up a market under the Manhattan Bridge. (Courtesy MCNY. Note: This photo may be of an earlier market here, but this gives you an idea of where the 1914-15 markets would have been located.)

Groceries are becoming more expensive as retailers mark up prices due to food shortages (or simple price gouging at perceived shortages). So people are turning to rather unconventional methods of getting fresh meat and produce.  Is this 2014 or 1914?

At the start of World War I, there was an immediate shortage of certain food items at New York grocers. Local distributors greatly took advantage of this special circumstance, marking up a variety of essential items.  “Sugar and flour, which have been increasing in price so rapidly, gave indications of continuing their upward march,” an article from August 19, 1914 proclaimed. 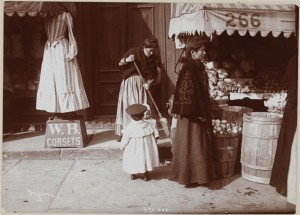 Fifty years before, New Yorkers could interact with farmers and butchers directly at open-air markets.  But by the 1910s, most transactions were governed by local distributors. Old Washington Market was by this time a thriving indoor wholesale market. Local grocers had limited space with limited selection. The era of the modern supermarket — with greater selections and better values — was still a decade or two in the future. (The first supermarket is often considered to be Piggly Wiggly, which opened in Tennessee in 1916.)

To fend off rising food rates, the city of New York did something rather extraordinary:  it opened its own direct markets (or “open markets”) which cut out the middle-man entirely.

Manhattan Borough President Marcus M. Marks authorized the opening of four such markets in the following open areas — under the Manhattan sides of the Manhattan and Queensboro Bridges, the intersection of 3rd Avenue and 129th Street (today’s Harlem River Park), and the Fort Lee Ferry Terminal (West 139th Street and the Hudson River, near today’s Riverbank State Park).  A similar program was also set up in Tompkinsville, Staten Island.

Below: Interior of the Queensboro Bridge Market, 1915 (MCNY) 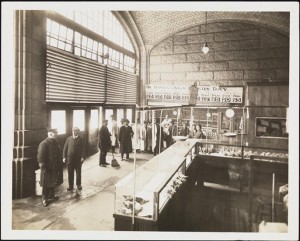 The markets opened in September 1914 with dozens of Long Island and New Jersey farmers bringing their wares to New York. Pushcart vendors, already spread throughout the city, also set up shop here.  What makes this such a controversial move is that it was a clear attempt to undercut all established grocers, to force distributors to quit gouging price.

They were an immediate hit despite being located in areas quite distant from certain populated areas. The markets appealed to women of many classes, because who doesn’t love a bargain? “At this market were many housewives who came in automobiles to buy from the farmers,” said a report from September 20, 1914. “Baskets filled with fresh vegetables and fruits were on seats, and the legs of more than one chicken projected from paper parcels under the chauffeur’s elbows.”  By 1915, the markets were considered by some “a social affair.”

Below: from an April 1915 profile from the Sun:

The open markets were so successful that stock was usually emptied out by mid-morning.  Late-arriving women “actually wept when the market was bought out.” [source]

Naturally, retail grocers were angered by the city’s bold move and soon went on the offensive. “There is nothing but politics in this open market game, gentleman, from start to finish,” declared one speaker at a grocers union rally that October.

The city counteracted the grocer’s propaganda by providing ‘bargain days’ for extra values, reeling in the participation of farmers, butchers, poultry brokers and even honey producers.  “A butcher, who will open a new stand, says that he will give a head of cabbage in lieu of trading stamps to every purchaser of a piece of corned beef.” [October 15, source]

The markets lasted only a few months and, strangely enough, it was the city itself that killed them. Obviously bending to pressure from local businessmen, the city began charging high rents for a spot at the markets, and smaller farmers soon fled.  The Evening World noticed rents that would equal up to “$900 a year”. That’s $20,000 in 2014 currency.

In essence, this was one end of New York government attempting to dampen the authority of the other (namely, the borough president’s office).  Vendors had to raise prices to keep their place, and so the usefulness of the markets swiftly faded.