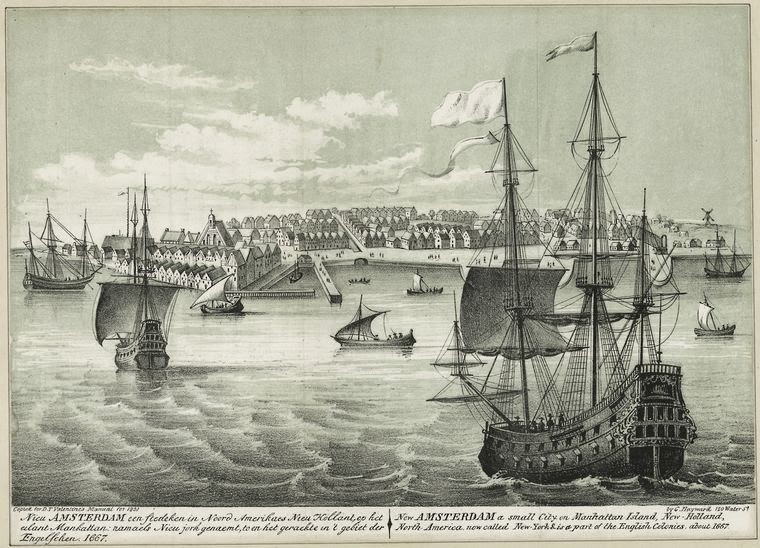 The new Ken Burns seven-part documentary The Roosevelts: An Intimate History is underway on PBS, a sprawling look at one of New York’s most prominent families.  It began last night with the introduction of young Theodore Roosevelt, the sickly boy turned New York police commissioner. Tonight, in part two, he becomes the President of the United States.

With so many Roosevelts to speak about — and two clans of Roosevelts, named for their summer haunts Hyde Park and Oyster Bay — there wasn’t much time to mention the very first Roosevelt.  That is, the first ancestor to arrive in future North America — Claes Maartenszen van Rosenvelt.

Claes arrived to New Amsterdam sometime around 1649 or 1650, although possibly much earlier (some records say 1638), one of a number of Dutch settlers arriving at this outpost of the Dutch West India Company.  If the earlier dates are true, this puts Rosenvelt in the outpost during the years of William Keift, when New Amsterdam was a ragged company town, with a rudimentary civic structure and in constant fear of attack by the Lenape.

His wife is referred to in records as both Jannetje Samuels and Jannetie Thomas.  Keep in mind that with the paucity of extant records, a company-town’s inefficiencies, basic human error and the “peculiar method of naming people during Dutch times,” it’s incredible that we even have these names at all!

Many histories make note of Claes unusual nickname — Klein Klassje or Cleyn Claesjen (“Little Claes”) — perhaps meaning he was a short man or that there was a much larger Claes in town. It’s not inconceivable to think he was also “short” in social stature, not physical. 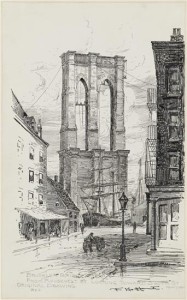 The colony was whipped into a relatively more livable condition with the arrival of Peter Stuyvesant in 1647, and records list Claes as having a farm “situated back of Stuyvesant’s Bouwery, at present somewhere between Broadway and the East River, in the neighborhood of Tenth Street.” [source]

The couple had four children of which only one (Nicolas) took and kept the name Rosenvelt, which of course was modified over time into Roosevelt.

For decades, Manhattan once had a Roosevelt Street, named not for any of the later great leaders who would make the family famous, but (it’s believed) for either Nicolas or his son Jacobus. The family owned a profitable mill on a small stream which ran between the East River and the banks of Collect Pond. [source]

At right: the construction of the Brooklyn Bridge as seen from Roosevelt Street, 1876 (courtesy MCNY)

In the 19th century, Roosevelt Street was a dour place, rife with poverty and the downtrodden culture of South Street piers.  It was entirely erased in the 1950s with the creation of the Alfred E. Smith Houses.

2 replies on “The story of ‘Klein Klassje’, the New World’s first Roosevelt and the surprising origin of Roosevelt Street”

[…] or Jacobus Rosenvelt, the son and grandson, respectively, of the first Roosevelt in North Americaâ€“Claes Maartenszane van Rosenveltâ€“who arrived in New Amsterdam around 1649. Today this land is occupied by the Governor Alfred E. […]

Readers may also be interested to learn that Roosevelt Avenue was home to one of New York City’s most prolific animal traders during the late 1800s. Donald Burns sold lions and tigers and bears (oh my) from his shop at 115 Roosevelt Street in the 1880s. I was even lucky enough to find a picture of this very building in the NYPL collections. http://hatchingcatnyc.com/2015/12/03/manatee-swans-new-york-roosevelt-street/