One hundred years ago today, the Detwiller & Street fireworks plant, located in the Greenville section of Jersey City, exploded in a horrible shower of fire and glass. Â Four men were killed instantly and dozens of employees were injured. Â Several surrounding buildings “fell to pieces like houses of cards.” Â  The rumble shook buildings throughout the city, up to Weehawken and even into Manhattan and Staten Island. [sources]

This was the sad, weird reality of munitions plants in the New York metropolitan area. Â Staten Island was one of America’s largest producers of fireworks and saw its share of disasters, including a 1907 explosion in Graniteville.

But there was one huge difference between the 1907 Graniteville disaster and the 1914 Jersey City explosion — World War I. Â Fireworks manufacturers during the war also produced munitions. Â As the United States wasn’t yet engaged in the European conflict, some manufacturers were hired directly by the Allied nations.

The New York Tribune notes the unwillingness of executives to talk about the blast, and eventually the plant’s superintendent was eventually charged with “violations of the Crimes act, which makes it unlawful to store high explosives within 1,000 feet of a Â highway unless in a fireproof vault.” 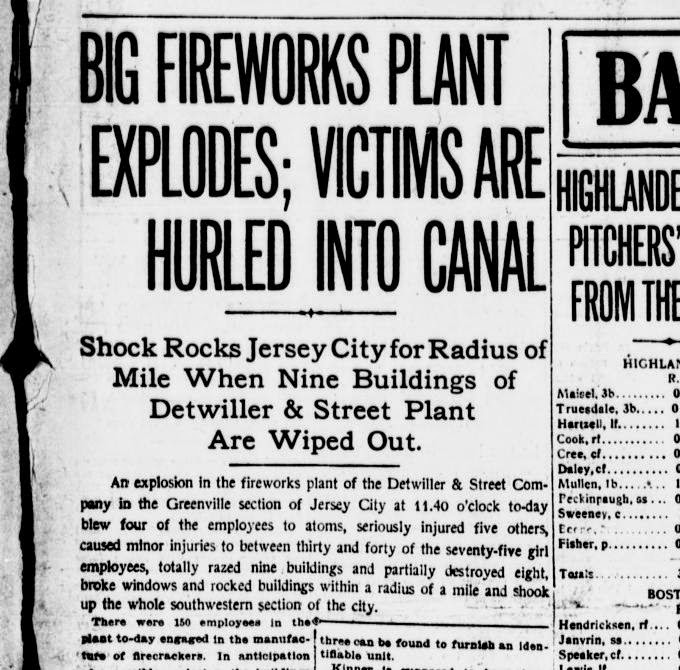 While the press reports of the day never explicitly mention Detwiller & Street’s munitions productions, it’s clear from later incidents that this was probably at least part of the plant’s output that year. Â Another explosion at the very same plant in 1917 killed nine, all women. Â A safety report clearly indicates then that “[t]he company is engaged in the manufacture of munitions for the Russian government.” Â On hand to rescue some of the women was a Russian munitions inspector. [source]

This naturally leads to a more disturbing question — was the 1914 explosion sabotage by the German?

An early postcard from 1873. Â The New York based Detwiller & Street specialized in “fireworks, time danger signals, railroad track torpedoes, etc.” Â They were also responsible for the spectacular fireworks display at the opening of the Brooklyn Bridge. 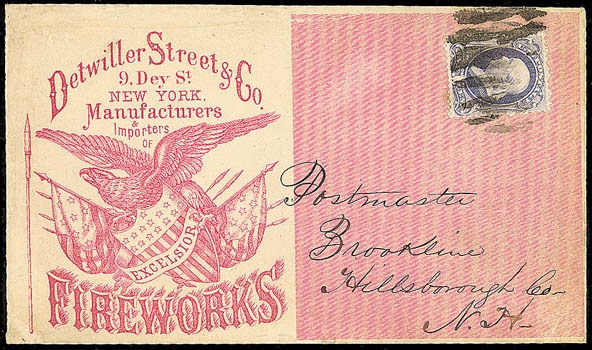 That’s one suggestion according to a 1918 book The German Secret Service In America 1914-1918, listing a set of suspicious fireworks accidents in New Jersey before Oct. 3, 1914, Jersey City disaster. While these early accidents may have been due to increased munitions contracts in the hands of inexperienced employees, the authors admit ominously, “These explosions were the opening guns.”

German orders from that year make clear the focus on American targets. Â From the German Secret Service book: “[A] circular dated November 18, issued by German Naval Headquarters to all naval agents throughout the world, ordered mobilized all ‘agents who are overseas and all destroying agents in ports where vessels carrying war material are loaded in England, France, Canada, the United States and Russia.” 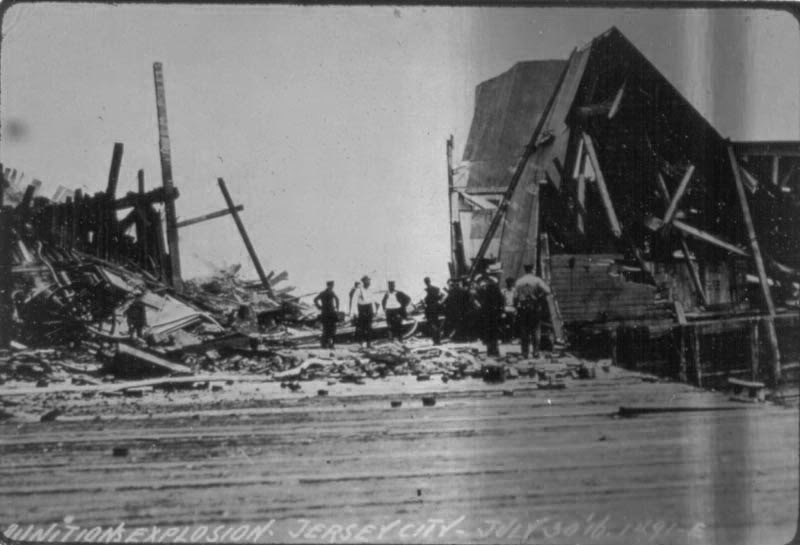 This had horrible consequence for the United States and those plants in New Jersey, New York and Pennsylvania in particular, leading to the greatest act of sabotage prior to America’s involvement in World War I — the Black Tom Explosion. (Pictured above: Aftermath of the Black Tom Explosion, courtesy Liberty State Park)

On July 30, 1916, a munitions depot on Black Tom pier in Jersey City was set ablaze by German agents. Â The resulting explosion killed seven people on neighboringÂ Ellis IslandÂ  in Jersey City and ricocheted through the metropolitan area, shattering windows in Times Square and over at St. Patrick’s Cathedral and shaking people from their beds in Brooklyn. Â The Statue of LibertyÂ also suffered damage from this act of sabotage.

And so it’s hard to read accounts of the Jersey City explosion from one hundred years ago and not imagine the possibility of sinister intention.

2 replies on “In 1914, a Jersey City fireworks and munitions plant exploded. Was it sabotage by the Germans?”

In your second to last paragraph: “The resulting explosion killed seven people on neighboring Ellis Island and ricocheted through the metropolitan area….”

Those killed were not located ON Ellis Island. There were no reported fatalities on Ellis Island, only damage to buildings, including blown glass and damaged doorways.

Those who died were located in Jersey City.

Thanks! I made the correction.