As you can see, the Bowery Boys: New York City Â History blog has gone through some major changes this week. Â We have a new URL (boweryboyshistory.com) and a dynamic new layout which will present articles, photographs and podcast audio is a more user-friendly way. Â There’s still some backlogged clean up to do so thank you for your patience. Â But we think this new format is more reader friendly and makes these old photographs look so much more amazing.

And so, on that note, I thought I’d test out the expanded-image waters here by presenting a few views of one of the most enchanting places from the 19th century, a place that no longer exists — the MountÂ ProspectÂ Reservoir.

Back when it was an independent city, Brooklyn received most of its drinking water fromÂ Long Island, pumped into to a large receiving reservoir in Ridgewood. Â Some of that was then send southward to a reservoir built in the late 1850sÂ at the second highest point in Brooklyn — Mount Prospect — rising 200 feet above sea level.

The reservoir was 3 1/2 acres, holding 20 million gallons of water at a depth of 20 feet. Or, according to the Brooklyn Daily Eagle,Â “containing just about enough water to cook the breakfast of the people of Brooklyn for a week

The elevation was not included in the original design of Prospect Park, conceived in the 1860s as Brooklyn’s own Central Park. ** Especially odd when you consider that Prospect Park takes its name from the hill where the reservoir resided.

Â Standing besides the man made lake was a pumping station and aÂ grand Gothic tower, 30 feet tall. The world could be seen from here. “From the top of the tower … could be afforded a grand view overlooking the Park and City of Brooklyn; south may be seen the Atlantic Ocean; west, Staten Island and New Jersey; north, the Bay and the City of New York; east, the Navy Yard, Williamsburgh and the East River, altogether affording one of the grandest views imaginable.” [source]

Below: Circa 1900, looking north from the reservoir over Eastern Parkway into what is today’s Prospect Heights neighborhood. Â Below that, looking out over Grand Army Plaza. Photos by George Hall and Sons. Courtesy Museum of City of New York 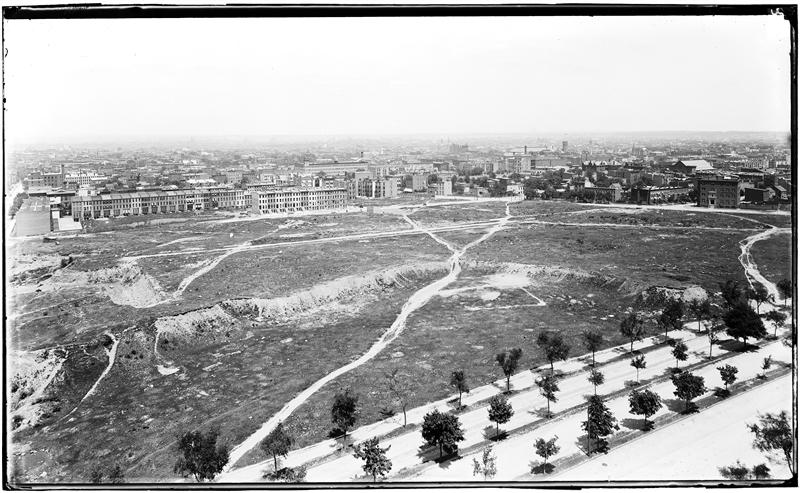 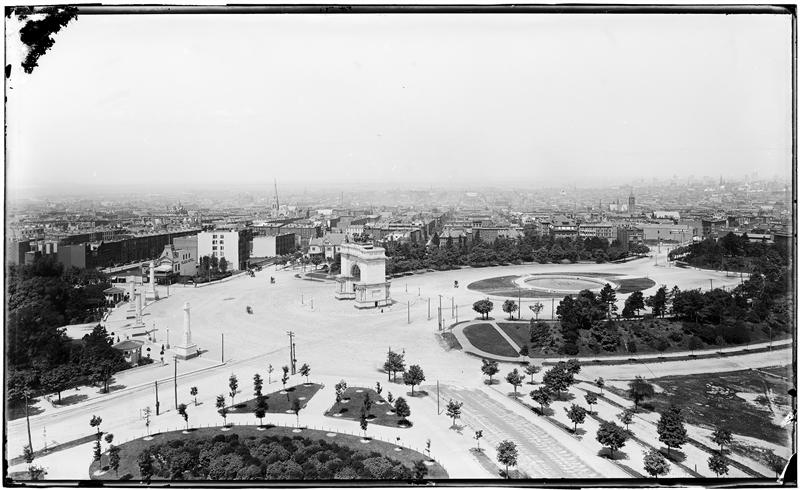 When Brooklyn was incorporated into the consolidated Greater New York, they also were brought into New Â York’s central water system (i.e. the Croton Aqueduct, later blended with the waters of the Delaware and the Catskills). Â The Mount Prospect Reservoir was dismantled in 1940 and turned into a park. And the tower was torn down as well when the central branchÂ of the Brooklyn Public Library was constructed.

According to BPL’s blog, Â “The wrecking company in charge of tearing it down announced in the Eagle that the Connecticut pink granite used to build the tower would be made freely available to anyone who wanted it.” Â So there may be pieces of the old tower incorporated into buildings all across the borough!

GREAT find! I’ve never seen these. But I must challenge one of your points. The East Side Lands, including Mt. Prospect, WERE included in the original plan for Prospect Park. That’s why the park is called Prospect. Original park boundaries were to have spread across Flatbush north along Vanderbilt and Washington to Warren St.

But Olmsted and Vaux nixed this idea, because Flatbush Ave. was already a major thoroughfare and would have been expensive to bride or tunnel to link up the parts of the park. And, in their prototype park, Central, they had learned how disruptive cross-roads ( Transverses) are. Central is substantially bigger than Prospect, but Prospect feels bigger because it’s not chopped up by Transverses. The Long Meadow in Prospect is much larger than any meadows in Central. Instead, O & V argued for purchase of new lands by the Litchfield Villa (9th Ave., now PPW), which they got.

Area to northeast of Flatbush became Institute Park, with Brooklyn Museum (existing building is only a 1/4th of its original design), Botanic Garden, and ultimately Mt. Prospect Park.

In 1898, Brooklyn became part of New York City, however, not all of Brooklyn drank upstate water.

We drank ‘Flatbush water’, well into the 20th century.I seem to remember it into 1954(?). http://theweeklynabe.com/2012/12/14/aqua-flatbush-brooklyn-the-flatbush-water-works-company/

My father filled empty bottles with these waters, just so he could remember what it looked like.I remember darkish swirls at the bottom of these bottles.Hard water is healthier to drink,
but soft water soaps up better.

Coincidence? Or does this happen all the time? And does it have anything to do with the reservoir?

Great pictures! Parts of the old Brooklyn water system can still be found near Ridgewood Reservoir and pumping stations all long the old route on Long Island. Some other remnants: Force Tube Avenue in Brooklyn and Conduit Boulevard in Queens. A piece of the retaining wall of the reservoir with its wave patterns can be found opposite the back (children’s section) entrance to the Library. Note: the reservoir was demolished long before 1940; the playground was opened in 1937.