Here’s a little inside look on some of the fun stuff that we sometimes get to do while researching a podcast:

Tom headed over to the New York Public Library while researching our show on Nikola Tesla and got the opportunity to looking into the library’s rich trove of original documents from the Manuscripts and Archives Division.

It’s one thing to study facts in a book or read the depictions of events in an old newspaper. It’s quite another to get close up to the historical figures themselves through their actual correspondence, not so much for the information, but for the tone and character of their voices. Â Even though these papers are all mostly business-related, you can really get a sense of Tesla’s personality and how he viewed others. He was ambitious and creative. He was anxious and protective.

As we mentioned in our podcast on Nikola Tesla, his South Fifth Avenue laboratory was destroyed in a fire on March 13,Â 1895. It was a well publicized event, especially in scientific journals. Tesla most likely received many letters like the one below at his home at the Gerlach Hotel (today’s Radio Wave Building, named so in his honor).

The nextÂ three are letters to friend and architect (and scaliwag)Â Stanford White, outlining the constructionn of Wardenclyffe Tower in Long Island. Â The third letter is by far the most intriguing, sent days after the shootingÂ of William McKinley. Â The president died the day after Tesla’s letter was sent, andÂ White’s friend Theodore Roosevelt would then ascend to the presidency.

The American Bridge Company was newly formed in 1901Â but traces itself to the civil engineering firm that builtÂ the Eads Bridge in St. Louis, theÂ longest arch bridge in the world at the time. New York projects for the firmÂ in the 20th century would include the Empire State Building, the Chrysler Building, the Woolworth Building and the Verrazano-Narrows Bridge. They’re still in operation; in fact they’re finishing up work on a project at the George Washington Bridge.

Pennsylvania’s Bethlehem Steel Company was a giant of steel manufacturing in the Gilded Age. Just as Tesla and George Westinghouse got to display the marvels of alternating current at the World’s Fair of 1893 in Chicago, so to did Bethlehem Steel get to employ their wares; the world’s first Ferris Wheel,Â the grand attraction of the fair, was held together in Bethlehem Steel. 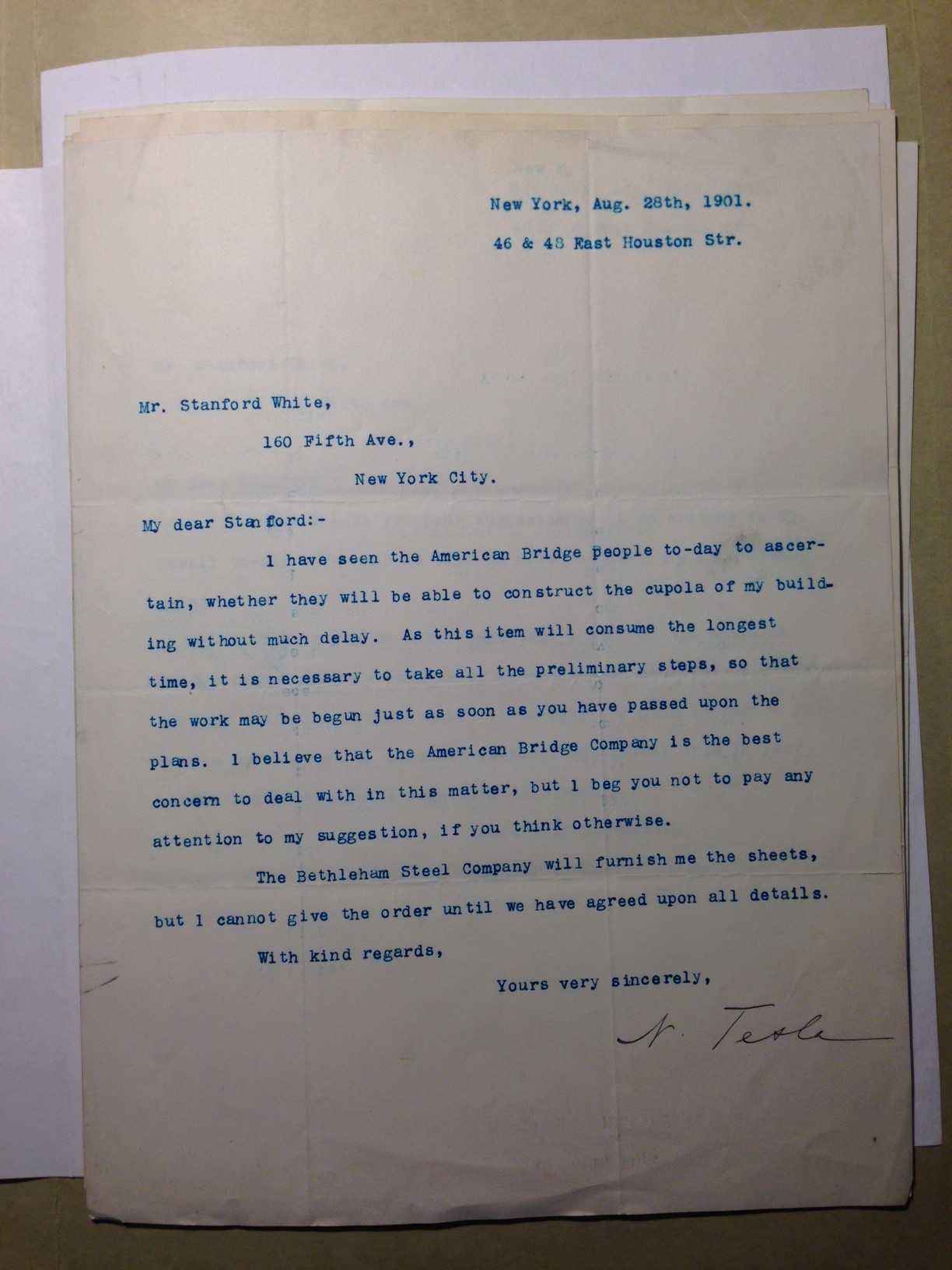 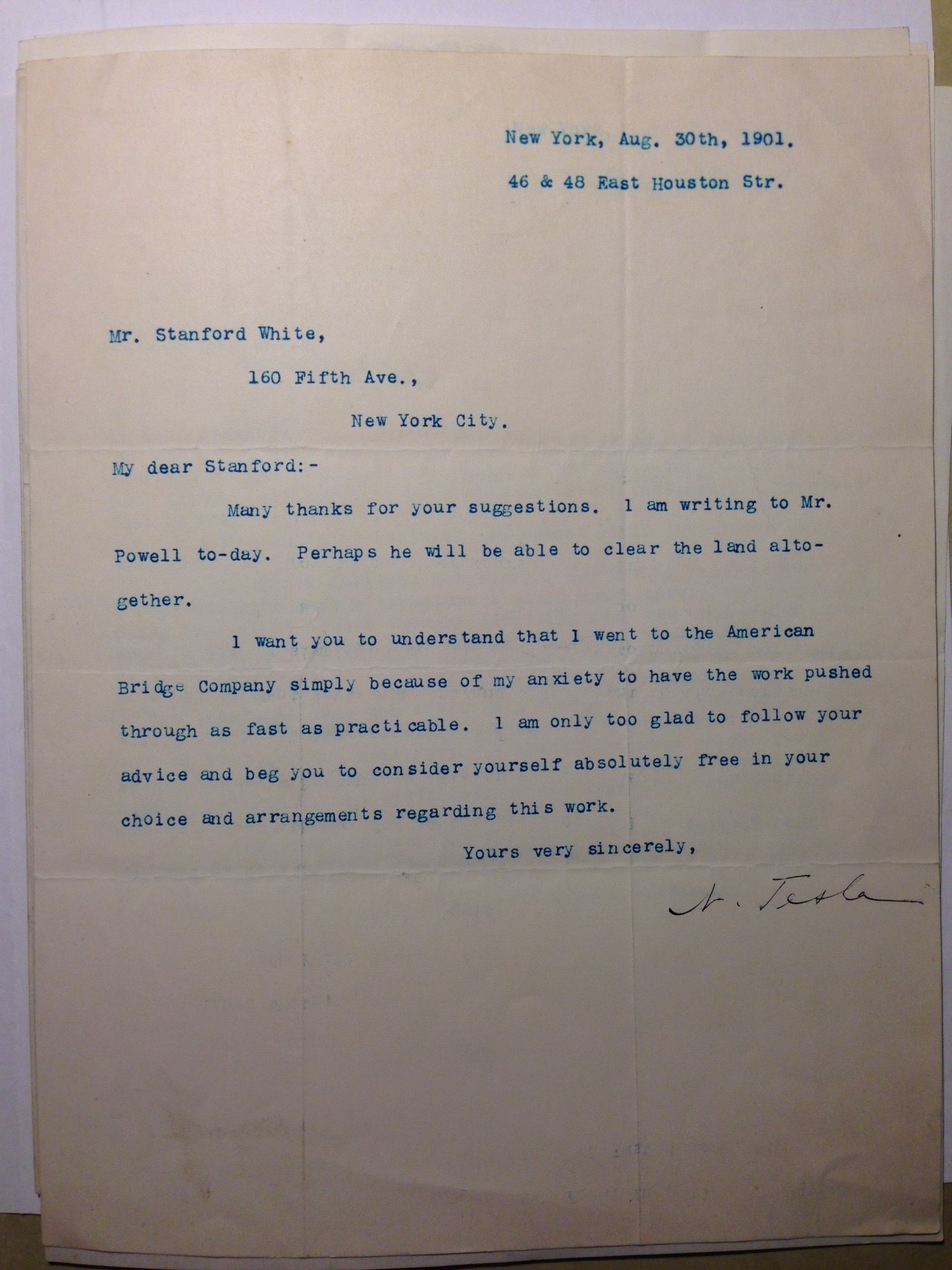 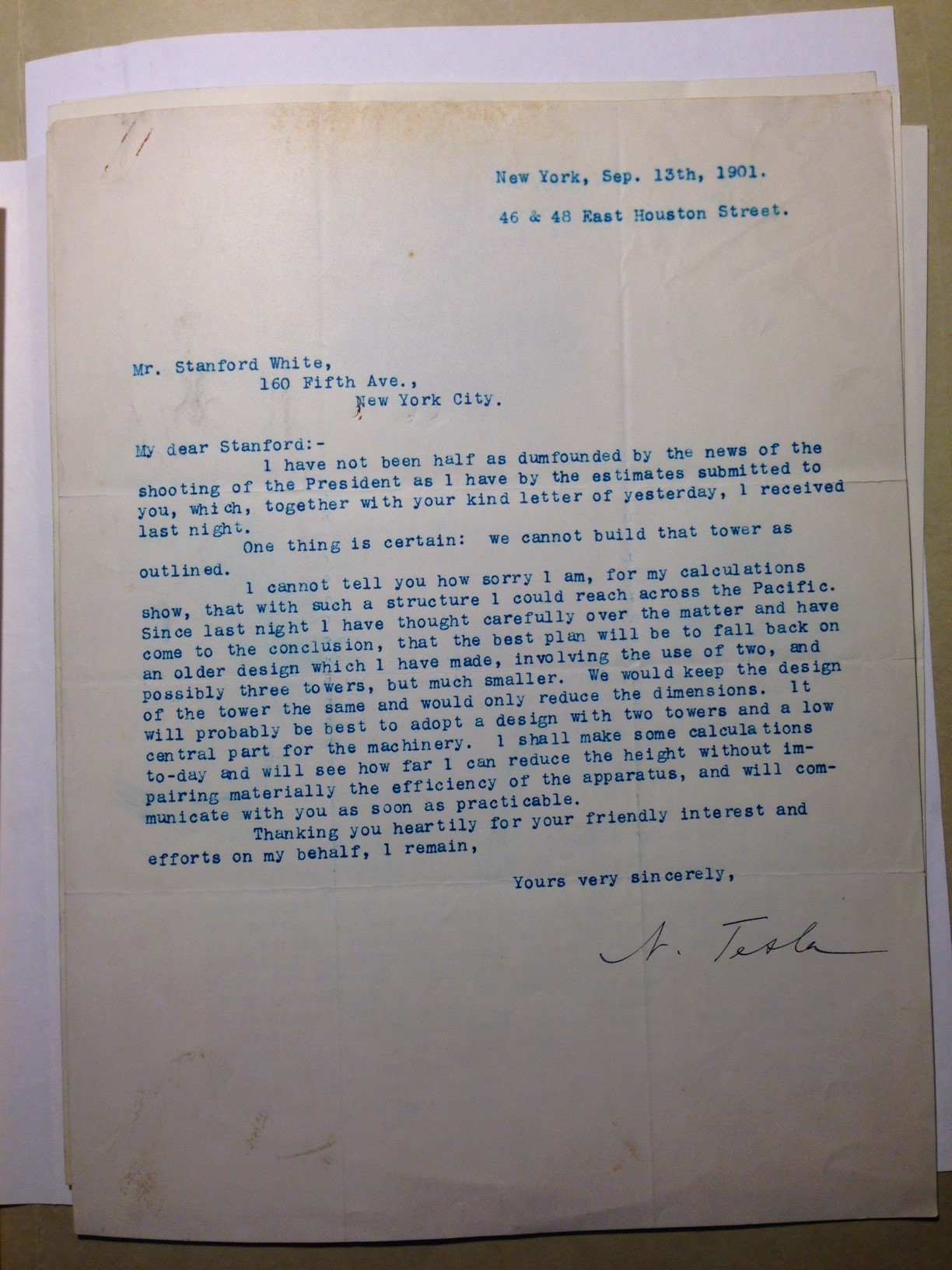 And here was the final result of their labor — the Wardenclyffe Tower in Shoreham, Long Island. 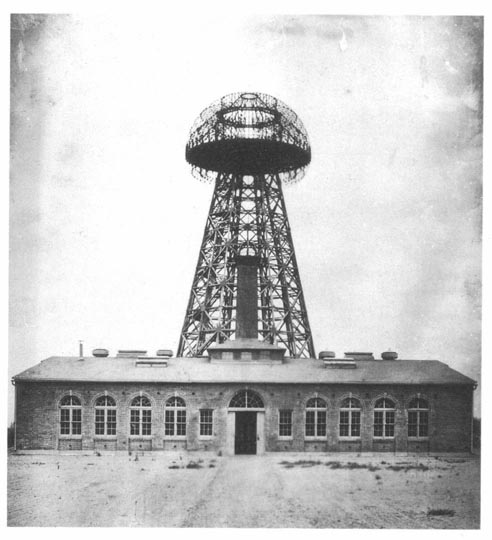 The final letter is intriguing for being written on the official Wardenclyffe Tower letterhead! Of course, in 1915, the tower had been long shut down, and Tesla was racking up the bills at the Waldorf-Astoria Hotel.

His correspondence is with young inventor Benjamin Miessner who was studying at Perdue University on this date. Â Miessner eventually went into acoustical research; he later innovatedÂ technologies in sound recording. A picture and biography of Mr. Miessner appear below this letter from the Press Club of Chicago’s Official Reference Book.

In the letter, Tesla references the fire of 1895 and his automaton experiment which was revealed at Madison Square Garden. You can also see a real preoccupation with keeping and protecting patents for his work (and a subtext of preservation of those patents). After all, in 1915, Tesla was out of money! 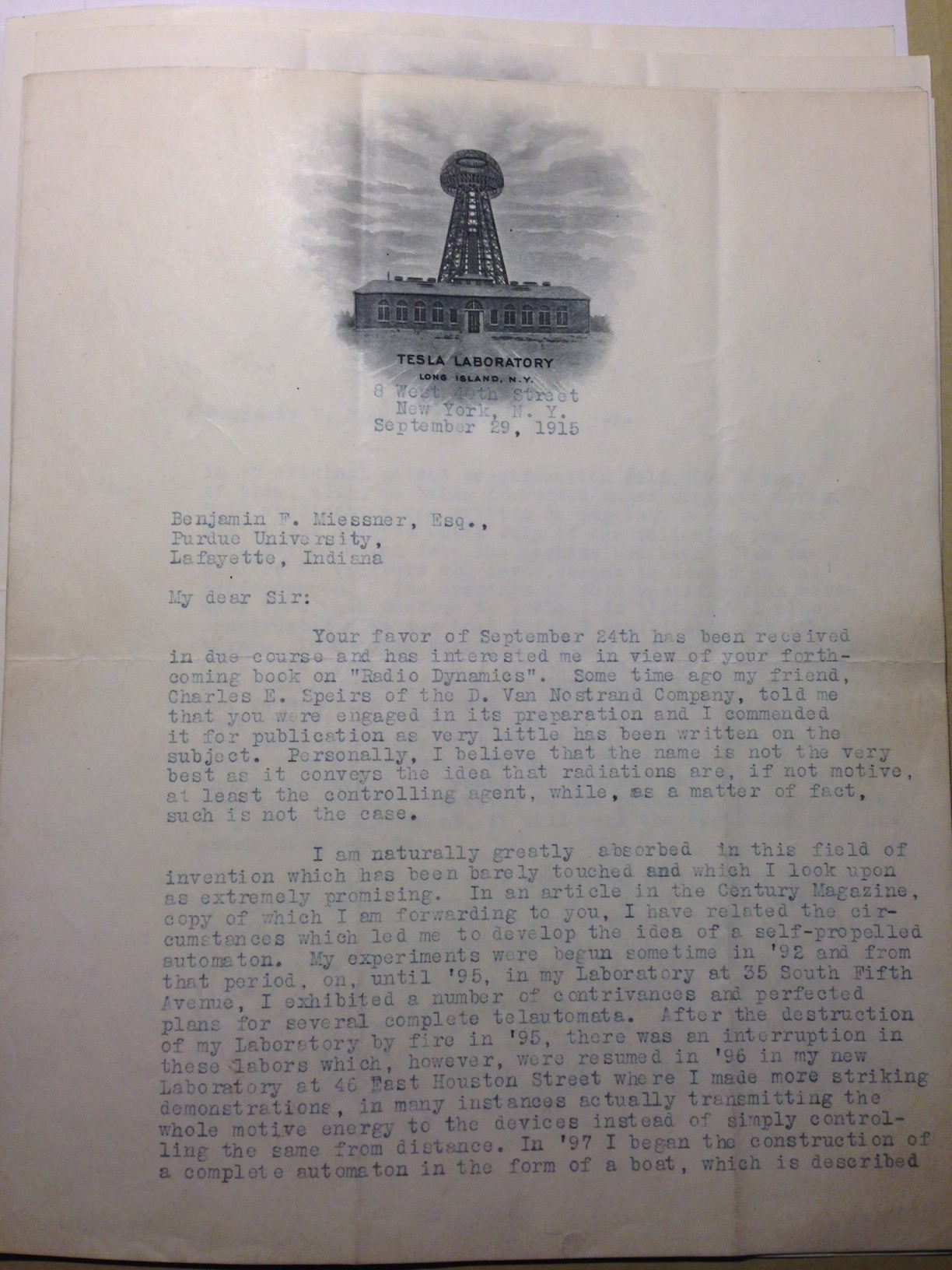 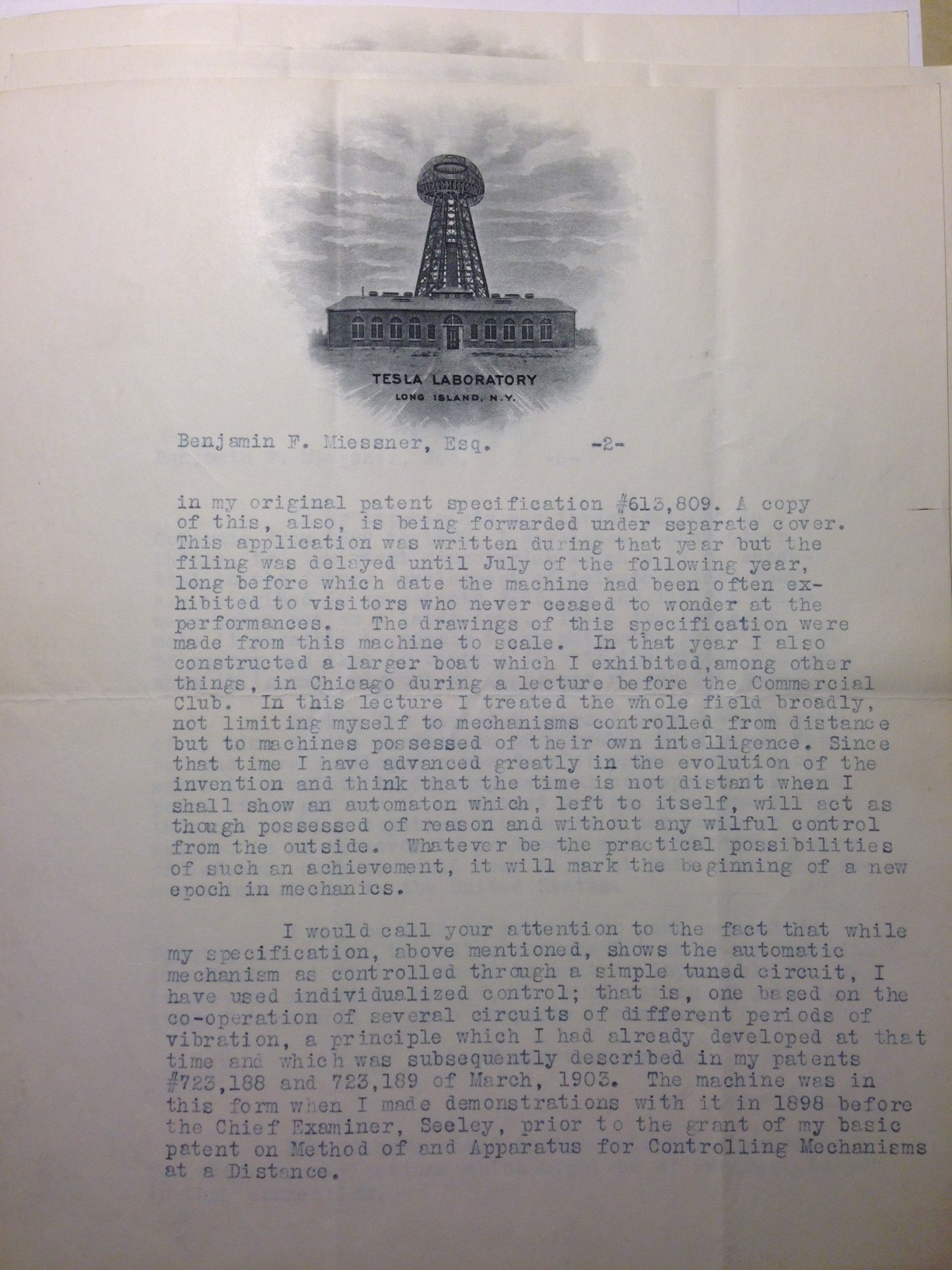 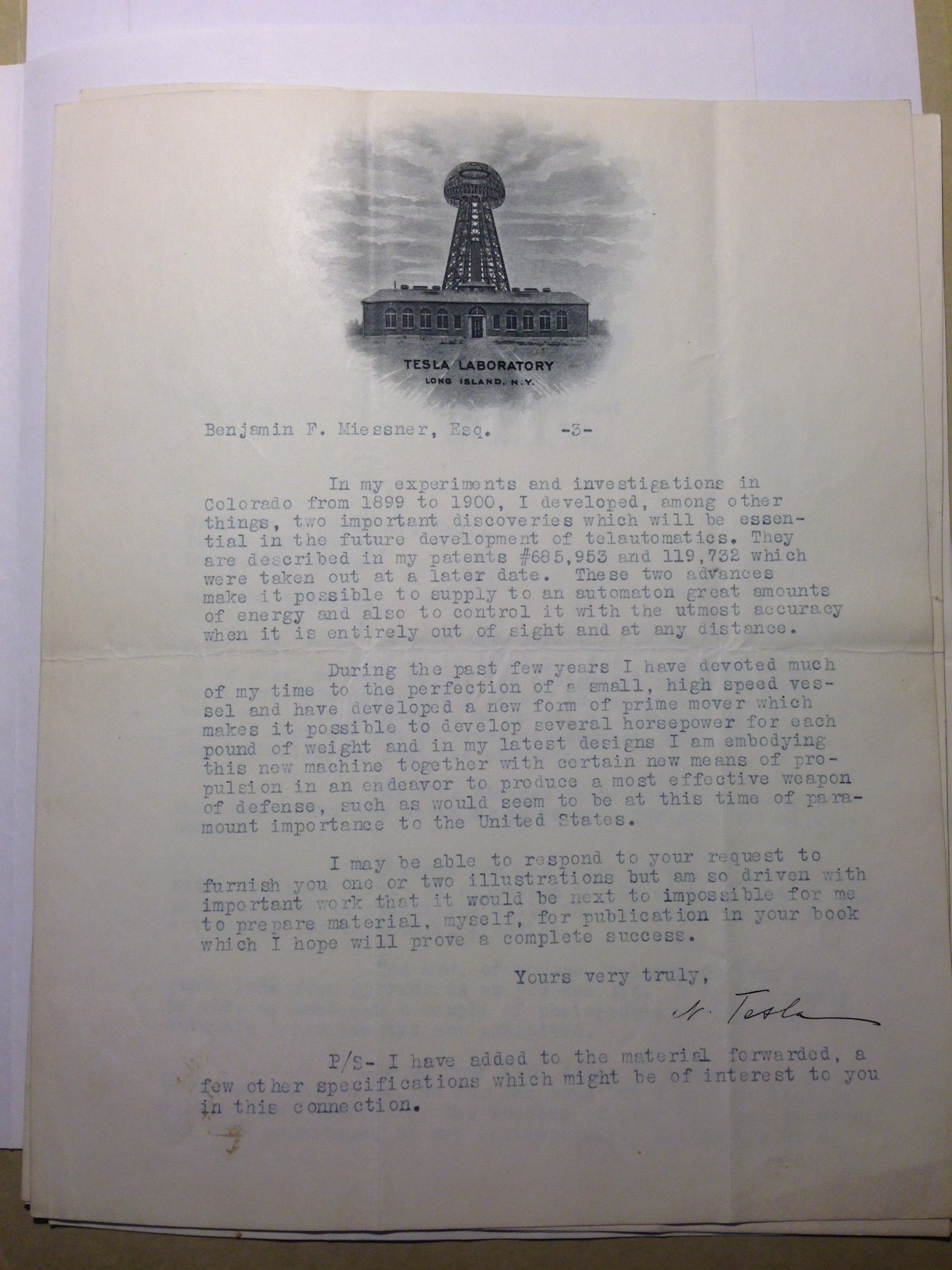 His correspondence partner Benjamin Miessner in 1922: 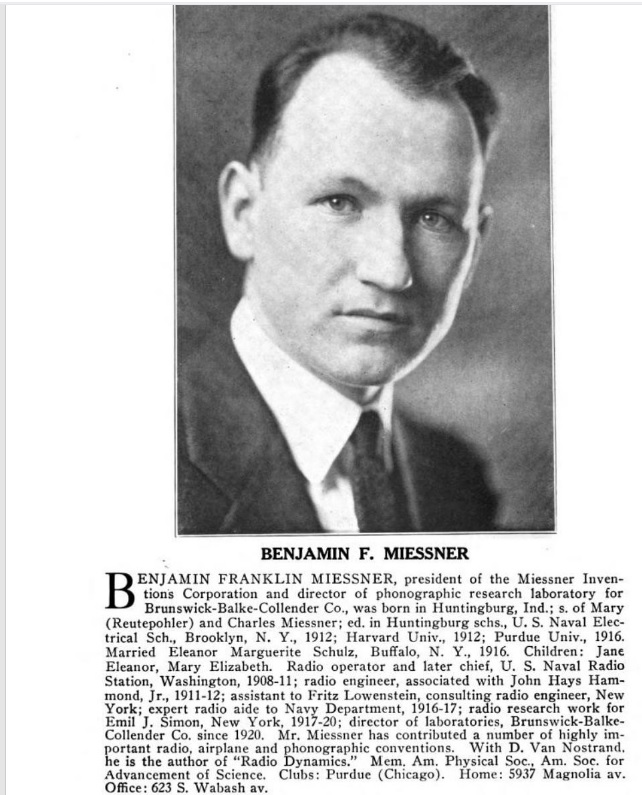 And finally, some library cards that Tesla check out himself, with an address of the Waldorf Astoria (which needed no address): 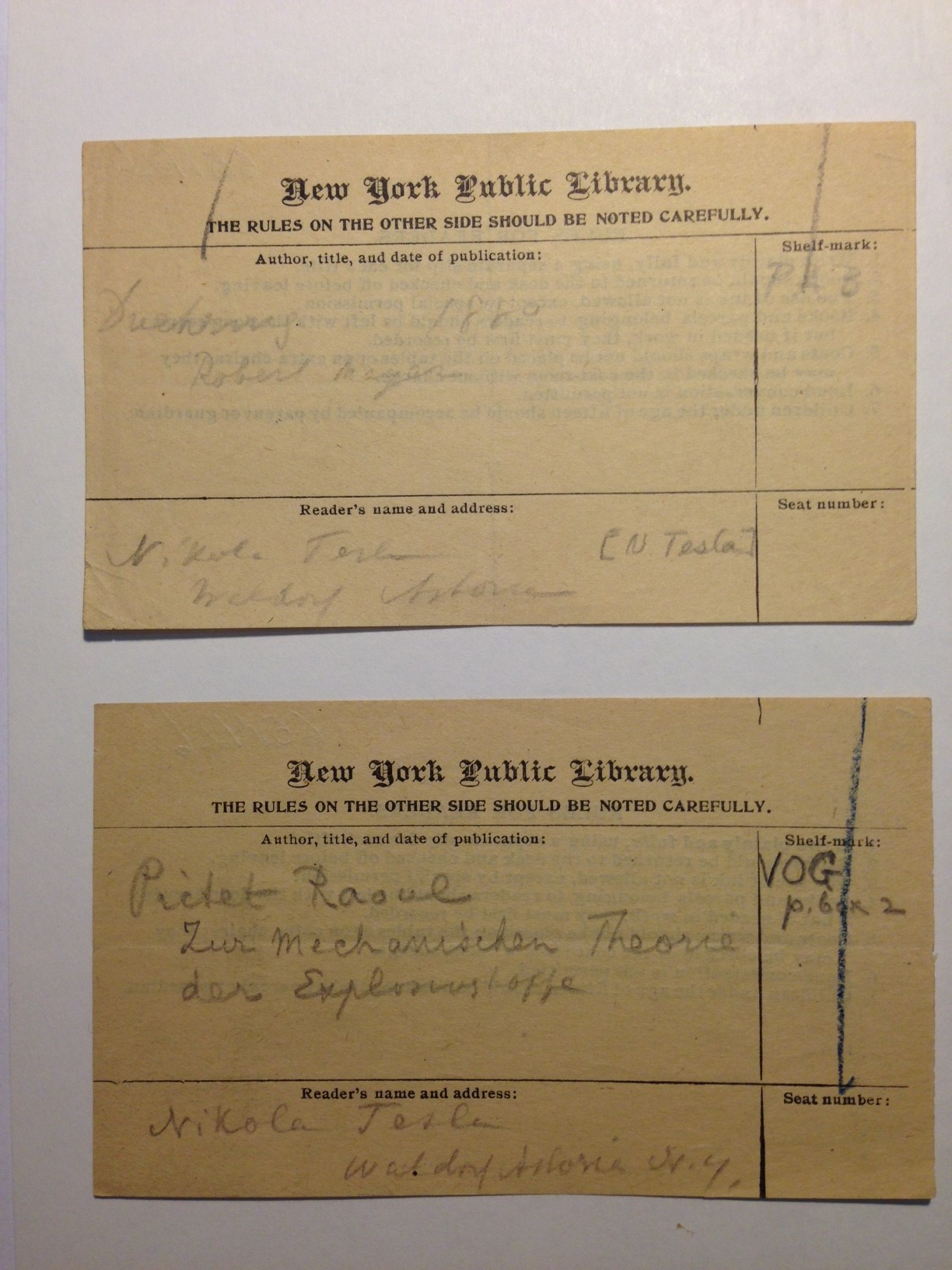 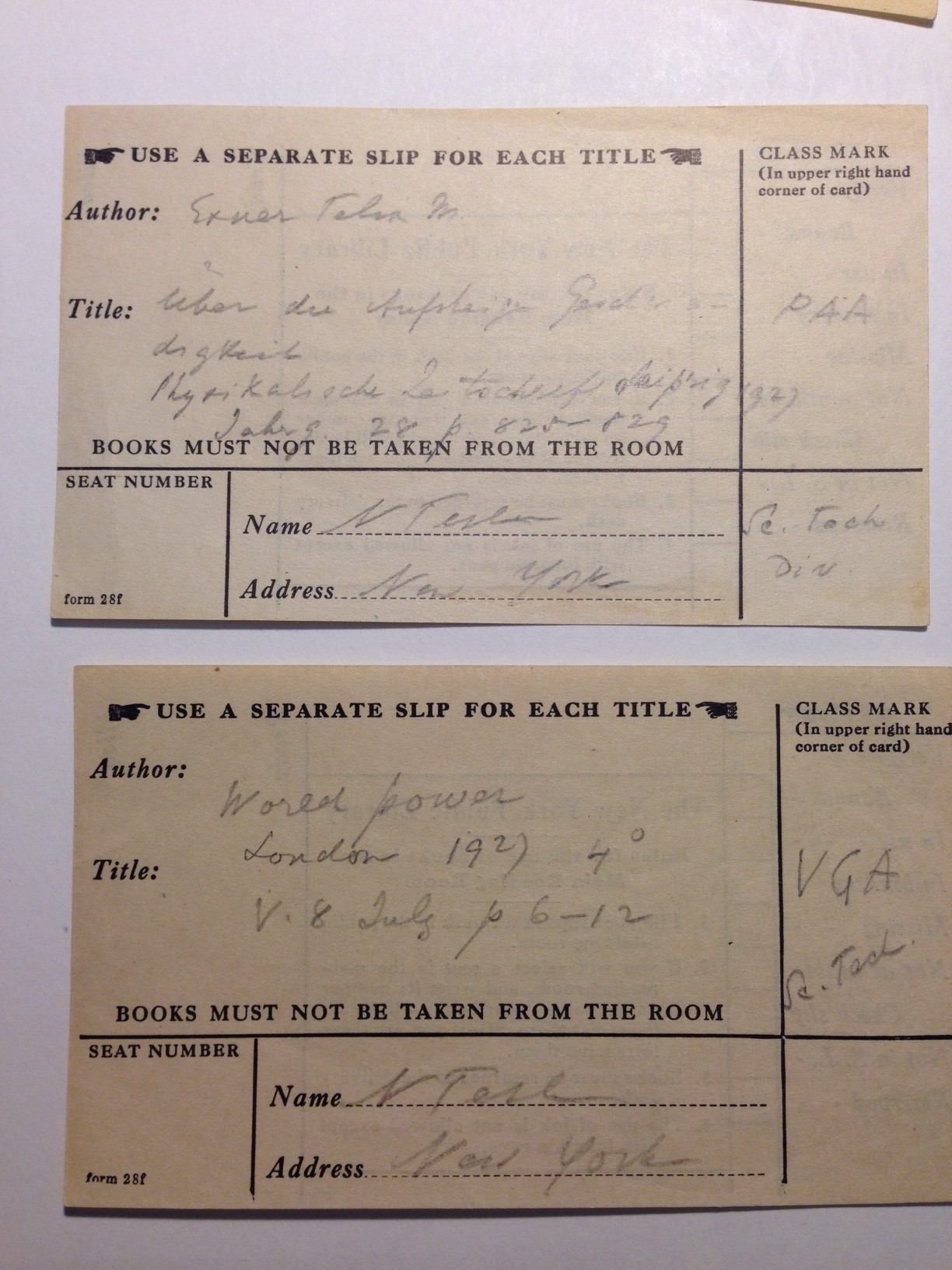 Documents from the Nikola Tesla letters. Manuscripts and Archives Division. The New York Public Library. Astor, Lenox, and Tilden Foundations. We thank the library for their help with this podcast and with all other things!

Purdue Univ. Not Perdue. You shouldn’t even think about eating those chickens.