Nobody remembers the Bronx World’s FairÂ of 1918 or, more precisely, the Bronx International Exposition of Science, Arts and Industries. Nor should they really. Modest in scale and only partially completed, the exposition failed to bring the world marvels on the scale ofÂ the elevator (from the 1853 Crystal Palace exposition) or the television set (from the 1939-40 World’s Fair in Flushing-Meadows).

It was,Â in most aspects, a flop. But something very magical — and very nostalgic — arose in its place.

The fair was twenty years in the making, opening onÂ June 29,Â 1918, two decades after the Bronx had become an official borough of New York. While many areas of the Bronx (as the Annexed District) were already part of New York as early as 1874, it wasn’t until consolidation that Bronx leaders began shaping a new character for this former section of Westchester County. 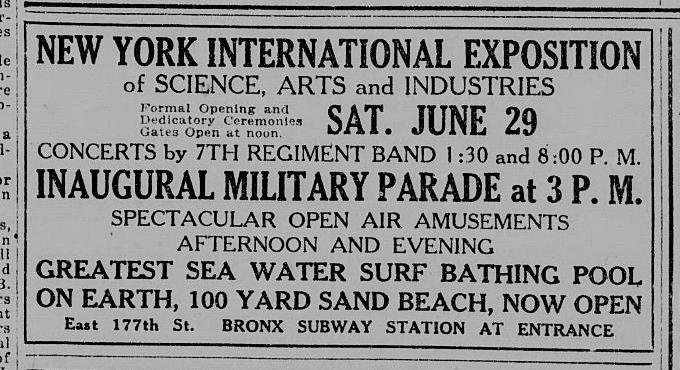 But in a sense, the fair was 300 years in the making. It was initially planned as a commemoration of the first European settlement in the Bronx. (NOTE: The park was supposed to open in 1917, although I’m still not sure which measure they’re using to get 1617 as a date of settlement; JonasÂ Bronck, considered the ‘first’ settler, arrived in 1638.)

The fair was developed on the old grounds of the WilliamÂ Waldorf Astor estate in the neighborhood of West Farms, just to the south of Bronx Park.

From the caption: “Bird’s-Eye View of the Bronx International Exposition Grounds showing the wonderful location in the heart of the great city, and transportation facilities, with railroads, subway and elevated lines, surfactelines and automobile boulevard at the very door. Â The Bronx River, providing anchorage for small craft, forms the western boundary Â of the exposition grounds.”

The fair was meantÂ toÂ â€œattract foreign trade to this country after the war.â€ Â It was to be aÂ Bronx show-and-tell. “The exposition will bring hundreds of thousands of visitors, who will have the chance to see the Bronx at its very best. There is no reason, it is said, why a certain percentage of those newcomers might not become interested in real estate.” [source]

From a 1917 advertisement in Billboard Maazine attempting to drum up exhibitors. 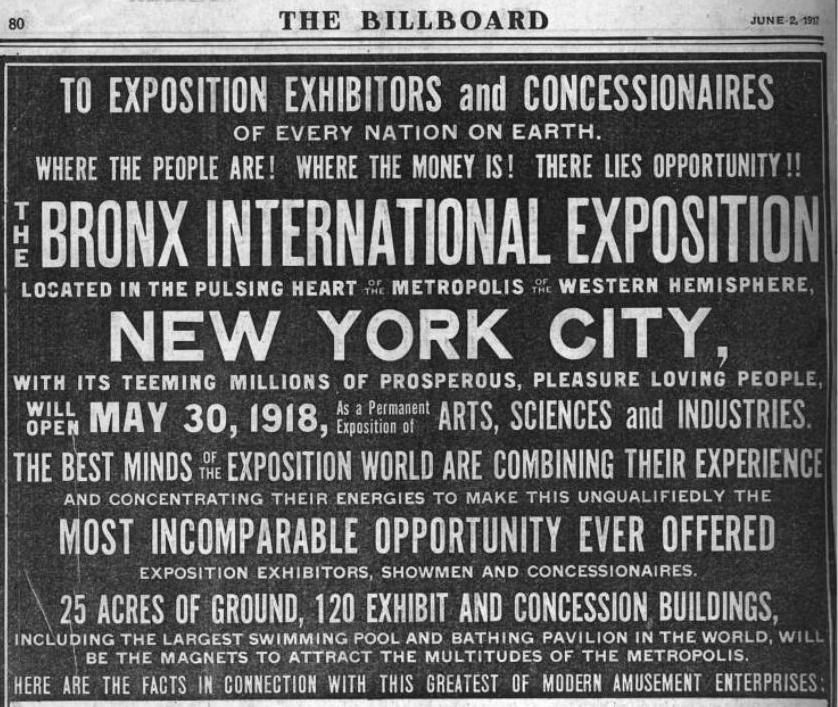 Below: Grand plans indeed. What the Bronx fair was supposed to look like.

The fair openedÂ almost one month late, having already been delayed a year due to the war.Â Even still, when it didÂ open, most of its buildings were yet to be completed. Most would never be finished. Â Â “[T]here are only a dozen buildings and a number of concessions including a restaurant, a roller coaster, a centrifugal swing and a nonsense house,” giving it “the impression of a mini-Coney Island.” [source] [source]

Perhaps the most notable structures at the opening wereÂ the bathing pavilion, a private club called Circle de Papellon, and “what is said to be the largest salt water surf swimming pool in the world.” 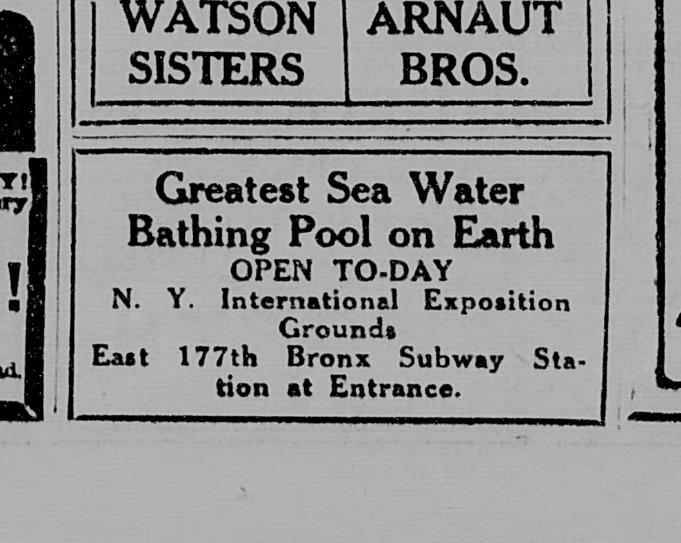 Over the coming weeks, fair attendees would attend such free attractions as Madame Torelli’s Comedy Circus, the Lunette Sisters aka “the whirling Geisha Girls,” and performances by the world’s greatest high-diver Kearney P. Speedy. Â And there was some kind of “monkey cabaret” as well.

One of the Exposition’sÂ most popular attractions was aÂ small submarine called the Holland, the very first commissioned by the United States Navy.

The fair was ‘international’ in the sense that only one country (Brazil) actually showed up to exhibit anything. Â After all, it was entirely unrealistic to expect exhibitors while a war was raging in Europe. Â By August, the only headlines coming out of the International Exposition were related to swimming and diving. (“HAWAIIANS REPEAT TRIUMPHS IN TANK.”)

Most the fair’s more serious fare took a backseat to the amusements, as this advertisement from September 1918 indicates. TheÂ Exhibition Hall was eventually turned into a skating rink. Although one could enjoy cooking demonstrations and a fine exhibition of hardware:

By the following year, it was decided to just dispense with the serious stuff entirely. Â Well before the fair, there had been much talk of turning the Astor property into an amusement park. After the Exposition ended, that finally came to fruition — as Starlight Park.

Thousands of children descended upon Starlight Park during the summer, one of the popular attractions in the Bronx in the 1920s. 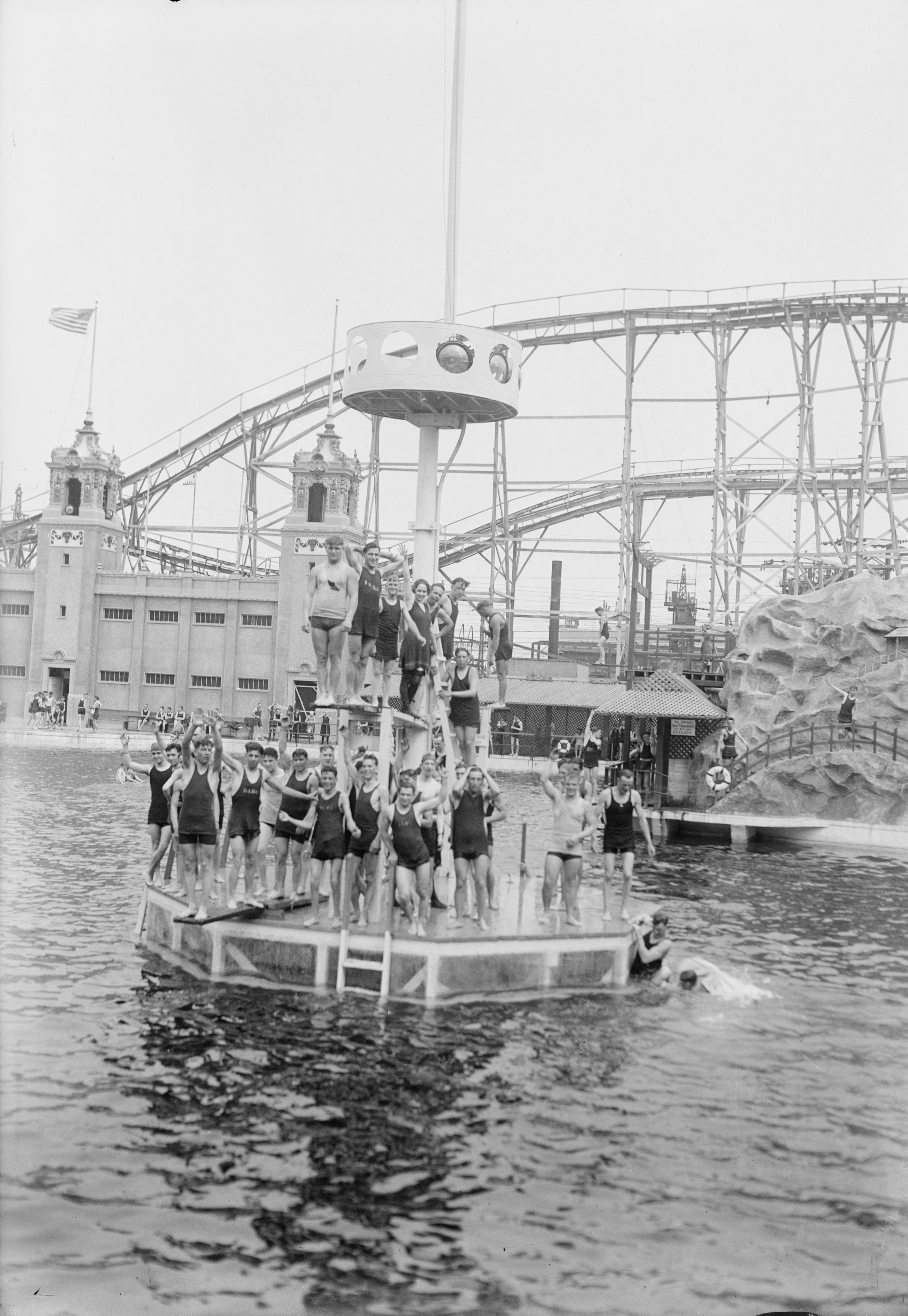 One of the parkâ€™s centerpieces was a giant stadium called the Coliseum which held up to 15,000 people, often there to cheer on New Yorkâ€™s premier soccer team, the New York Giants, who made Starlight their home from 1923 to 1930.

By the 1930s, most of the rides had closed, but the pool was still a popular draw. The park became a magnet for the areaâ€™s working class families, who enjoyed sunbathing, picnicking and, if they stayed after dark, moonlight dancing to live big band music. One of the very first Bronx radio stationsÂ WKBQ also made Starlight its broadcasting home in 1931.

Sadly, Starlight met with a rather ungraciousÂ fate. The park was slowly demolished over the years and by 1940 it was permanently closed, transformed into a city truck facility. AÂ fire in the late 1940s destroyed any remaining vestiges of the park, and its memory was completely wiped away by expanses of the Cross Bronx Expressway.

Today there’s a children’s playground at around the spot of the old exposition called Starlight Park.

Below: Strike up the band! Conductor V. Bavetta provides musical accompaniment to the visitors of Starlight Park

NOTE: Clips of this article originally appeared in my old 2009 post about Starlight Park.

4 replies on “The Bronx World’s Fair of 1918: the failure which became a magical park”

Amazing peice of history shared. Thank you so very much for the nostalgic trip.

I have been collecting World’s Fair memorabilia for quite a while and this is one fair that I have been unable to find anything at all.

Until this week-
I now have two original color postcards! They are watercolor paintings of the exposition grounds published in 1917 by the Bronx International Exposition, N. Y. City.