PODCAST New York’s Crystal Palace seems like something out of a dream, a shimmering and spectacular glass-and-steel structure — a gigantic greenhouse — which sat in the area of today’s Bryant Park. In 1853 this was the home to the Exhibition of the Industry of All Nations, a dizzying presentation of items, great and small, meant to exemplify mankind’s industrial might.

We take you on a breathtaking tour of the Palace and its legendary exhibition, including the Latting Observatory (the tallest building in New York!)

Whatever happened to the Crystal Palace? And what inventions contained within do we still benefit from today?

EDITOR’S NOTE – I mis-pronounced the name of the Fresnel light (actually pronounced fre-nell). Its modern ancestor is used in theatrical lighting today. 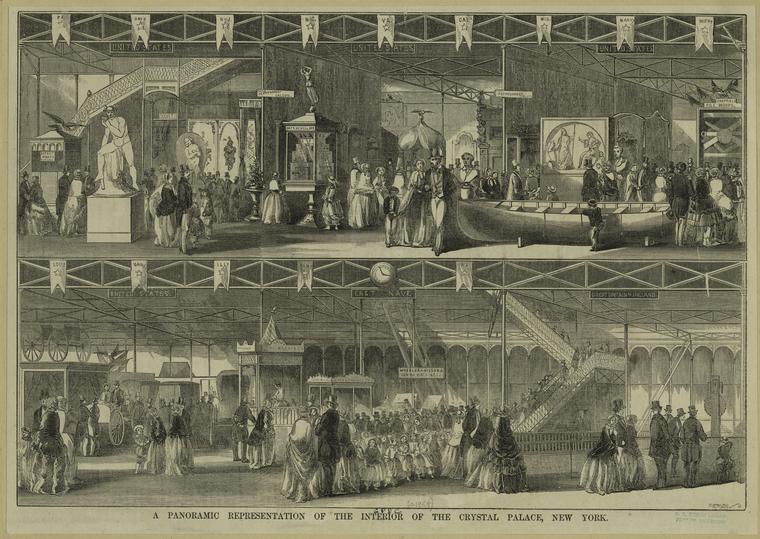 Some original documents that you may enjoy reading:

— How To See the New York Crystal Palace: Being a Concise Guide to the Principal Objects in the Exhibiton

And for some comparison, a guide to the London Crystal Palace can be found here.

3 replies on “The Crystal Palace, America’s first World’s Fair and bizarre treasury of the 19th century”

[…] The Bowery Boys podcast on the Crystal Palace Exposition […]

I have for many years read the history of the Crystal Palace as built for the Great Exhibition of 1851 and it’s subsequent removal to Sydenham where it remained until it was destroyed by fire on 30.11.19366