Talk of hyper-gentrification, skyrocketing real estate and the ‘end of New York’ comes bundled with despair and helplessness. Walk down 59th Street and gaze as the super-talls blocking the sun, built for foreign investors who may never once step inside these luxury caverns.

Or stroll along Smith Street in Cobble Hill, observing the rows of boarded-up or vacant store fronts, their rents too high for most actual human retails. Or head to 125th Street to experience the amazing history of Harlem, only to be met with a smorgasbord of national brand retailers with few connections to locals.

What can I do about any of this?, you might think hopelessly. Activism, voting, speaking out — we must all do these things to protect the city we love. But the first step is education on the basic matters of rezoning and gentrification. Where do you even begin? 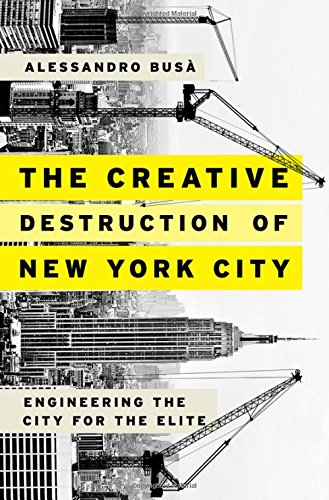 In The Creative Destruction of New York City, a manual for the big-city activist, the critical urban scholar BusÃ  lays out the current crisis in an explanatory, high-level inspection. Â One must turn to points in the past — 9/11, the near-bankrupt ’70s, even the destructive shenanigans of Robert Moses — to understand the often soulless and demoralizing changes to the city in 2017. The most troubling development trends began as remedies for past urban decay. Â In essence, the city is now choking on its former cures.

As examples, BusÃ  focuses on two neighborhoods in particular — Harlem and Coney Island. Â Neither of these places were ‘gentrified’ in the traditional sense — as in, initially driven by artists and the artists-formerly-known-as ‘bohemians’ that staked out Williamsburg in the 1980s and 90s. (Unlike other, angrier screeds,Â BusÃ  mostly steers clear from blanket condemnations of hipsters.)

Portions of Harlem were refitted for big-box retailers who quickly closed in on the mom-and-pop establishments of 125th Street, while luxury housing monopolized on Harlem’s rich history to attract wealthy urbanites looking a condo in a hip neighborhood. Coney Island’s redevelopment woes have eliminated parts of the iconic amusement district and wiped historic buildings from the map.

Below: Target opened in East Harlem in 2010. Today there are at least 15 Target stores throughout the fiveÂ boroughs.Â

At the core of both is that pesky, misunderstood implement known as rezoning. It’s a simple enough concept of course, the mechanism by which certain areas designated for one purpose (residential, commercial, industrial) switch to another. But asÂ BusÃ  says, “As of late, it has become the buzzword loaded with rather negative connotations in New York City. While for some residents it’s nothing more than some technocratic yaw-inducing mumbo-jumbo, for others this loathed word means a call to arms.”

BusÃ  breaks down the major players in city government and civic life who control these decisions and identifies the tools those parties may use in transforming New York, often for less-than-altruistic ends. At times, during the administrations of Bloomberg and De Blasio, rezoning seems to have no more purpose than to create wealth for a few private players.

The Creative Destruction of New York City, written by an academic, is dispassionate and often dry; consider this a compliment. There are many outlets for well-meaning, instructive outrage. (Every time I want to do something — call a congressman or join a protest — I go to Jeremiah’s Vanishing New York first.) BusÃ ‘sÂ more academic take on the crisis will help you understand the rules of the game and those who move the pieces. It’s the book you reach for after you get angry.

2 replies on “‘The Creative Destruction of New York City’: The Tools For Fighting Back Against Unwanted Change”

And what about the thousands of new apartments that will allow more people to actually live in and enjoy this city? I don’t understand why their needs for places to live are less important than your, and my, desire not to see things we are used to not change very much.

We can’t just think about ourselves, if we are decent and civic minded.

Nostalgia is a powerful sentiment, but it withers in the face of both reality and history. If such writings had been the norm in the past, the Lenape could have written similar things about the Dutch, the Dutch about the English, and so on. The tapestry of New York is woven from all these threads from the past, and will continue to be woven from those of the present. Fifty years from now, those who are shaping New York will be condemning whatever changes are being brought about then.

While it may be sad to see some of the institutions of our youth disappear, their demise makes way for new opportunities. And, the fact is that it’s becoming ever more expensive to run the city: education, public safety, transportation, housing, healthcare, and many other services are costing more to deliver–even if the city’s population were to remain constant, that would be true. The only way to finance these increased costs is to grow the tax base–otherwise, the 1970’s might one day seem like halcyon days of New York.

While it is undeniable that gentrification and rezoning are accelerating some of the trends that the author and his sympathetic readers lament, they are not the sole drivers of change. The ability to order almost anything via the internet and have it delivered to your front door is really the key macroeconomic factor impacting traditional retail of all types and sizes: from mom-and-pop shops to JC Penney and Toys R Us. No amount of activism is going to reverse the digital economy. Even the activists likely order from Amazon.

One final thought–analyses like these encourage the donning of sackcloth and ashes to mourn New York’s past. However, they ignore many good things that are happening in the city, like the renaissance of manufacturing in Brooklyn, increasing local production of fresh food in the five boroughs, many programs designed to help our youth–many of whom are underprivileged–succeed in today’s world, and the rebuilding of much of our infrastructure. I think this is an exciting time to be a New Yorker–let’s remember our past but work together for a better future.