The Brooklyn Navy Yard, no longer a bustling shipyard, lives on as a vibrant commercial compound of movie studios, bourbon distilleries and organic rooftop farms. Its waterfront, facing into Wallabout Bay, is relatively peaceful today. There are no remnants of its genuinely disturbing past.

During the Revolutionary War, New York was a British stronghold, and prisoners associated with George Washington and the Continental Army were often sent here for detainment. Soon the city’s make-shift prisons — sugar houses turned into decrepit jails — became too crowded, and the British needed to look for alternatives.

The answer arrived in the form of old naval vessels, previously used to transport supplies, that were moored off the coast of Brooklyn and turned into prison ships. For the duration of the war, hundreds of men and boys were thrown onto these wretched ships, forced to endure a litany of conditions so brutal and dire that they seem like tortures designed for a modern horror film.

And the worst of all of these was the HMS Jersey.

THE GHOST SHIP OF BROOKLYN
An Untold Story of the American Revolution
by Robert P. Watson
Da Capo Press

In Robert P. Watson‘s sharp and incisive new book, the author isolates the grim tale of the prison ships, often deemed a footnote in most Revolutionary War histories, from the actions of the conflict at large. It’s vividly narrow in scope, allowing the reader to experience the ship’s macabre trials in a sort of narrative entrapment. The prisoners themselves experienced the Jersey in such a way, trapped below deck with only the fleeting glimpse of New York across the water. For the damned, Wallabout Bay became an inescapable hell.

Watson weaves several first-hand accounts into the narrative, the tales of the lucky few who managed to escape. There’s a dash of Robert Louis Stevenson in the stories, plights regularly associated with swashbuckling tales of pirates. Except these horrid events took place just meters from the Brooklyn shoreline. 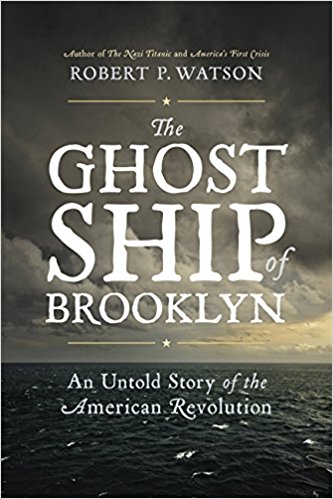 In fact, most prisoners who perished aboard the ship were buried on that shoreline, placed into the shallow ground by fellow prisoners, volunteering for burial duty as a way to say a final goodbye. Many days later, those bodies would be caught in the tide to eventually float out into the river.

But perhaps like a good swashbuckler, Ghost Ship of Brooklyn showcases several stories of impossible survival, daring prison breaks and even a couple surprising rescues. For every grim statistic, there’s a moment of desperate bravery. One of the most inspiring feats comes from the recollections of prisoner Thomas Dring who, seeing men around him dying of smallpox, decides to self-inoculate himself and others.

Several men managed to flee the death holds of the Jersey to later recount these thrilling escapes in memoirs. They were the lucky ones; according to reports of the day, 11,500 people died aboard the Jersey. As Watson notes, “over twice as many Americans were lost on that single, cursed than died in combat during the entirety of the long war!”

(Today the city honors those who died in the bay withÂ Prison Ship Martyrâ€™s Monument, the central feature of Fort Greene Park.)

2 replies on “The Ghost Ship of Brooklyn: Uncovering New York’s darkest secrets of the Revolutionary War”

Britannia Rules the Waves is actually Britannia Waives the Rules.