PODCAST The story of how Fifth Avenue, once the ritziest residential address in America, became an upscale retail strip and the home of some of New York’s finest cultural institutions.

In this episode, the symbols of the Gilded Age are dismantled.

During the late 19th century, New York’s most esteemed families built extravagant mansions along Fifth Avenue, turning it into one of the most desired residential streets in the United States. The ‘well-connected’ families, along with the nouveau riche, planted their homes here, even as the realities of the city encroached around them.

By 1925 most of the mansions below 59th Street were gone, victims of changing tastes and alterations to the city landscape. Clothing manufacturing plants swept through Greenwich Village, and such ‘common’ purposes threatened the identity of Fifth Avenue. To the west, the dazzling delights of Times Square seemed certain to wring any respectability out of Midtown Manhattan’s reputation.

But near Central Park, families of newer wealth filled Fifth Avenue with their own opulent homes — Carnegies, Dukes, Fricks — as though oblivious to the changes occurring down south.

Most of these habitats of old wealth are gone today. There’s no place for a 100-room mansion on one of New York City’s busiest streets. Yet a few of these mansions managed to survive by taking on very different identities — from clothing boutiques to museums.

PLUS: The building that was bought for a necklace!

Fifth Avenue at Twilight, an illustration (c. 1910) by artist Birge Harrison, depicting Grand Army Plaza and Vanderbilt’s mansion, with Fifth Avenue Presbyterian and the Gotham Hotel behind it.

By 1932, the transition to a retail district was virtually complete. Almost no single-family houses remained on Fifth Avenue below 59th Street.

Postcard caption (from 1935): “A view of Fifth Avenue, the parade ground of the nation, looking south from 48th St., famous for its smart shops and double-decked buses.” 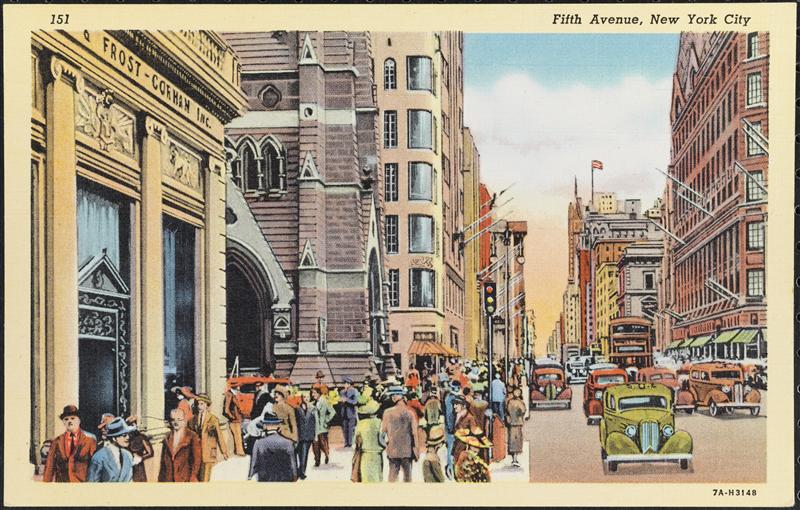 The corner of 59th Street and Fifth Avenue. Within 30 years this view would be completely transformed.

The new mansion ‘bonanza’ sprouted above 59th Street, a row of fine single-family palaces that would help create the ritzy reputation of the Upper East Side.

The home of George Gould (son of Jay), at Fifth Avenue and 89th Street

Demolition on Fifth Avenue was an extraordinarily common site in the first quarter of the 20th century. Â This is the northeast corner of Fifth Avenue and 54th Street in 1925. 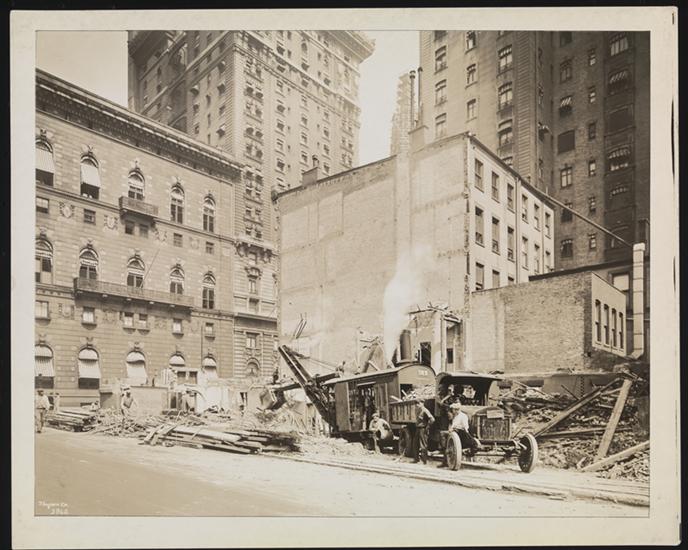 The mansion of James B Duke, 1938. The house still exists, as does the apartment complex (and its awning) across the street. 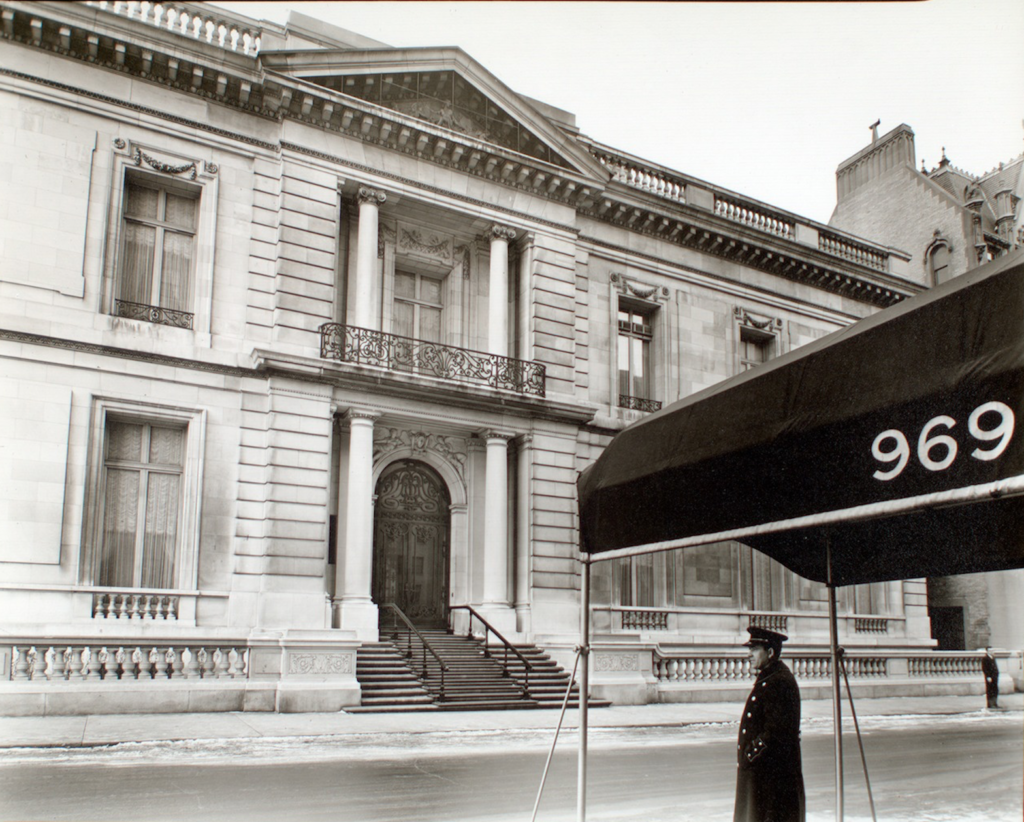 A confusion of automobile traffic along Grand Army Plaza, 1930 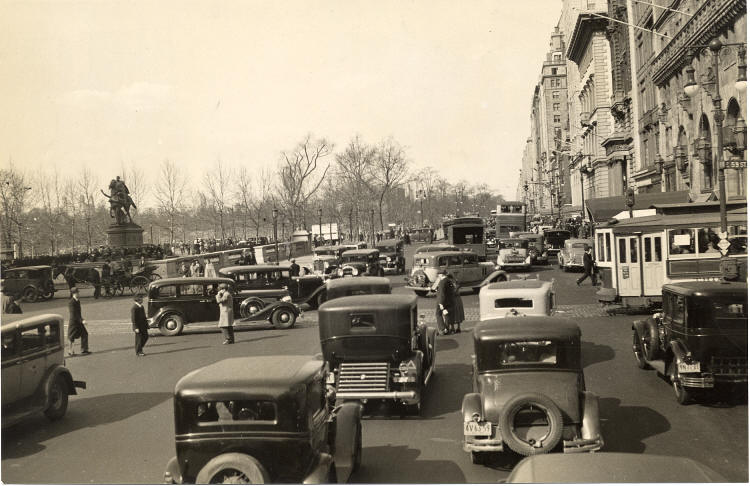 The new Bergdorf Goodman in 1930, replacing the old Vanderbilt mansion. 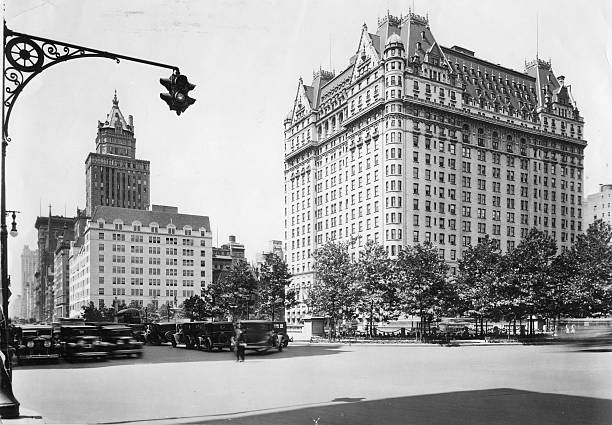 OTHER PODCAST LISTENING related to this show:

At top: A colorized image of Fifth Avenue from 1908 from Shorpy. Click here to see the original in deeper detail

5 replies on “The Fall of the Fifth Avenue Mansions: Where to find the remnants of an opulent past”

The takeaway is I guess it’s always a great time to be filthy rich.

What a fascinating social history, if you will, about the residences of some of the potentates who were part of the genesis of huge corporations which dominate the economy of the America in which we live today. Is there going to be a foray into the mansions of the Cliffwalk in Newport, Rhode Island, where many of these same aristocratic families built leisure mansions for their summer fun?

I’d love to hear a companion podcast about the estates on the Long Island Gold Coast. (After all, it is still NY history…)

Your title photo was colorized by me

Oh great! I’ll add the attribution. If you have a link to other work, I’ll be happy to include it.