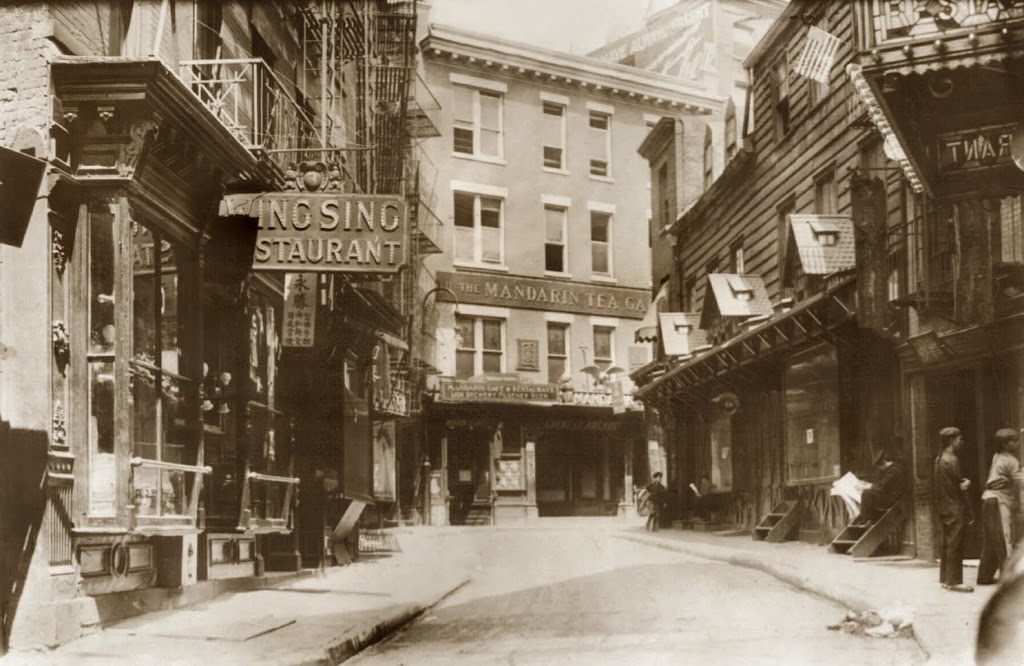 Doyers Street or ‘the Bloody Angle’, a street you might not want to find yourself on in the 1900s — unless you were an opera buff.

PODCAST Manhattan’s Chinatown is unique among New York neighborhoods as its origins and its provocative history can still be traced in many of the buildings and streets still in existence. Two hundred years ago, the sight of a Chinese person would have astonished New Yorkers, and the first to arrive in the city were either sailors or the subjects of tacky exhibition.

But with the first Chinese men setting on Mott Street, a new community was born, with thriving variety shops, cigar businesses and gambling dens alongside establishments of a more sensuous nature — opium dens and brothels. This mini-economy produced social clubs and secret societies (the legendary ‘tongs’), and rival gangs soon spilled blood along the neighborhood’s quirkiest lane.

And still today, modern Chinatown hides a few dark, startling secrets of its own.

ALSO: We give you a rundown of addresses along Mott Street and other places nearby. You can use this podcast as your official walking tour of the neighborhood!

MORE PICTURES AND INFORMATION WILL BE POSTED LATER THIS MORNING, INCLUDING A LIST OF ADDRESSES FROM THE SHOW

For a lot more information on the Chinese experience in America, I urge you to visit The Museum of the Chinese In America, located at 215 Centre Street. It’s free on Thursday and close to Chinatown. (Photo courtesy CUNY)

And here’s the addresses of places we mentioned in the podcast, as well as a couple other locations of interest. There are other places on these streets of great interest, so please meander freely:

1. 50 Spring Street – Quimbo Appo’s tea shop
Quimbo, an early Chinese success story in New York was in and out of prisons and mental wards later in his life. His son George Appo (below) was an equally notorious presence in the Five Points slums.

4. Chatham Square
In the 1880s, the open area was consumed with elevated railroad tracks, quite a

5. Confucius Plaza
Built in 1975 and one of the largest buildings in downtown Manhattan outside of the Financial District. (Picture courtesy the pretty fabulous blog Iconic Facades)

Not mentioned in the podcast, Port Arthur Chinese Restuarant, at 7-9 Mott Street, circa the 1900s, one of the first banquet halls of Chinatown

9. 25 Mott Street — Church of the Transfiguration
Easily the oldest structure in the neighborhood, and home to early congregations that weren’t exactly welcoming to Mott Street’s early Chinese residents.

11. Columbus ParkMany of Five Points most decrepit tenements were eliminated to make way for this park created by Calvert Vaux. The park is a lively part of Chinatown today, particularly on the weekends. [source]

12. 5-7 Doyers Street – Chinese Theater
A regular source of entertainment for locals and the sight of more than few altercations between rival tongs. Bodies were allegedly buried in the basement.

2 Doyers Street — Chinese Tuxedo Restaurant
Chinese had a powerful allure to the non-Chinese and to ‘bohemians’. This restaurant attracted businessmen looking for an ‘exotic’ night on the town. It helped that the Tuxedo was near the elevated train. (Courtesy Flickr/straatis)