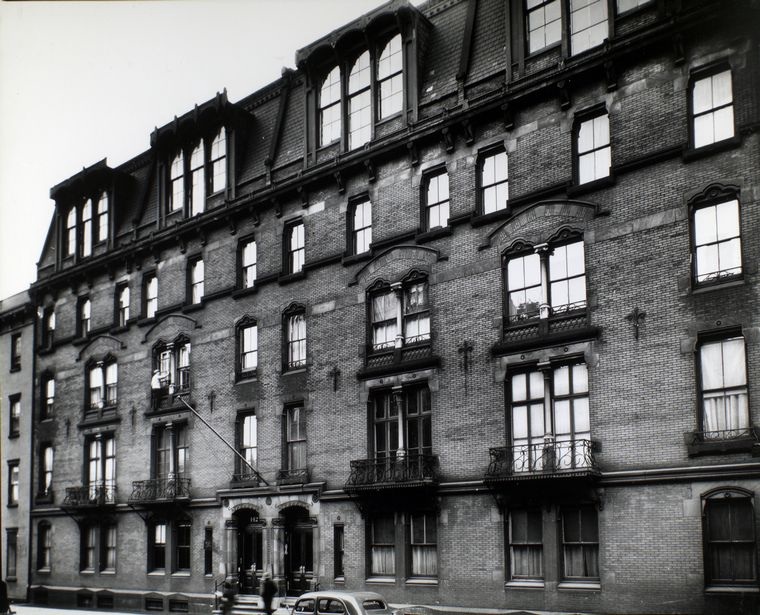 PODCAST Well, we’re movin’ on up….to the first New York apartment building ever constructed. New Yorkers of the emerging middle classes needed a place to live situated between the townhouse and the tenement, and the solution came from overseas — a daring style of communal and affordable living called the ‘apartment’ or ‘French flat’.

The city’s first was financed by Rutherford Stuyvesant, an old-money heir with an unusual story to his name. He hired one of the upper class’s hottest architects to create an apartment house, called the Stuyvesant Apartments, with many features that would have been shocking to more than a few New Yorkers of the day.

The building’s first tenants were sometimes well-known, often artists and publishers, and almost all of them with a fascinating story to tell. Listen in to hear about the vanguard first renters of this classic, long-gone building.

The tenacious Elizabeth ‘Libby’ Custer, photo taken in 1876, the year her husband was killed at the Battle of Little Bighorn. Mrs. Custer moved into Stuyvesant and successfully led her crusade to rehabilitate her husband’s reputation.

Maggie Custer Calhoun, younger sister to General Custer, lived with her sister-in-law at the Stuyvesant before embarking on a successful career as an elocutionist.

The landscape painter Worthington Whittredge also resided here. In fact, he beamed about it in his autobiography: “I was one of the first to subscribe for an apartment in this house, which was to be erected in 18th Street near Third Avenue and Stuyvesant Square.”

Earlier in his career, Whittredge posed as George Washington while Emanuel Leutze painted ‘Washington Crossing The Delaware’. (Worthington is quite comfortable on both sides of the easel The painting below is by William Merritt Chase.)

In its later years, the Stuyvesant was used as the set for a pivotal scene in the Oscar-nominated film noir ‘Kiss of Death’ starring Richard Widmark. Needless to say, this sort of activity very rarely went on at the Stuyvesant.