Bowling Green is now a small, pleasant fountained park at the foot of the Alexander Hamilton Custom House (now the National Museum of the American Indian). Its blooming flowers and quiet charm completely mask its significance to American history. For in the Colonial era, this area, onceÂ the site of the public well, was the meeting place of disgruntled colonists who wished to vent their anti-British rage in protests and speeches.

This is primarily because of something the British happened to prop up there in 1770: a stark, imposing statue of King George on horseback, lording over his subjects in a pose of battle. Imagine your oppressor looking down at you just steps from your home and business, and you can easily see why it became the centerpiece for protest. 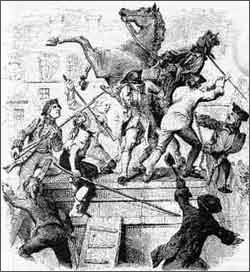 George Washington and his troops were stationed in New York in July of 1776, in the midst of a war with the British. On July 4, five days after it was drafted, Washington read* the newly minted Declaration of Independence to his troops in the city’s common area (today’s City Hall Park). Â They became so incensed with patriotism that the mob moved down to Bowling Green and violently toreÂ down the King George statue.

The intention was to turn the entire thing into bullets to fire back at the British. However only a small amount were used for this purpose.

The head was cut off and within the a day was stolen by British sympathizers and ferried back to England. To this day, nobody knows where the head is.

The other pieces, it seems, have been the subject of an elaborate hunt for historians, who are attempting to account for every possible piece of what is certainly one of the most maligned pieces of statuary in history. Its fragments have seemingly been scattered all over New England.

Fifty years after its dismantling, a farmer found King George’s saddle in his backyard pond. Much later, George’s left arm was found there, shipped to Canada, and lost. A plumber inherited the foreleg, almost melted it down, then bequeathed it to his daughter. Other families along the East Coast seemed to possess little parts of it — the mane, part of the cloak, the horse’s tail — many of them with a few Tory sympathizers in their ancestry.

The New York Historical Society possesses many of these fragments; the tail is proudly displayed in the museum’s grand entrance hall. Â Many others are presumably still popping up. Â Perhaps this might give you an excuse to visit your grandmother’s attic? A thorough outline of the investigation can be found here.

One irony is that many statues of George Washington on horseback look rather similar to the unfortunate one of King George.

I’d love to see an angry mob try to move this, standing just feet away from where mean ole King George once stood: 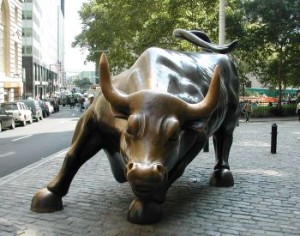 *Actually he asked one of his aides to read it to the crowd, having received the document three days earlier directly from John Hancock. Â The Library of Congress actually has a fragment of that very copy.

Hey guys, love your new site and love your podcast!! The link to the story found at the Sons of the American Revolution site is broken. Here’s the correct link – http://connecticutsar.org/king-georges-head/.

Thanks for all the hard work and amazing stories!!! Can’t wait for the next one

thanks for the article!
Also the last few times I’ve been down to that park I notice there are always cops stationed near the bull – so even if one could move it I don’t think they would allow it!!