Bowling Green, at the very tip of Manhattan island, is a small oval parkÂ so calm in comparison to its surroundings that it’s hard to believe this is one of the oldest sectionsÂ of the city of New York. Â  Here are ten facts about Bowling Green, accompanied by ten images and photographs from various periods in this tiny park’s extraordinary history:

1) The land comprising Bowling Green was situated next to Fort Amsterdam. Â During the days of New Amsterdam, this was the site of the first public well, dug in 1658 and would remain the only well within the cityÂ until 1677, long after the Dutch were replaced by the British.

2) Since it was next to the fort, it’s not surprising to discover that the area was a parade ground during the early 18th century. Â In 1733, it was leased to three local landlords — Peter Jay, John Chambers, and Peter Bayard — to develop an English-style park. It quickly became the destination of lavish homes of the wealthy.

3)Â Yes there was actually bowling here. Or rather, the traditional form of lawn bowling, enjoyed by the residents that lived around the park. Â This required perpetualÂ maintenance of the lawn. Before the invention of the lawnmower, this was usually accomplished by sheep. I’m not sure whether sheep were employed into service here at Bowling Green. But there were pigs in the street so you never know.

4) In 1770, loyalists to the crown erected an equestrian statue of King George III in the center of the park. Â Six years later, it was ingraciously torn down by New Yorkers after hearing George Washington read the newly crafted Declaration of Independence. Â Parts of that statue still exist in the city. 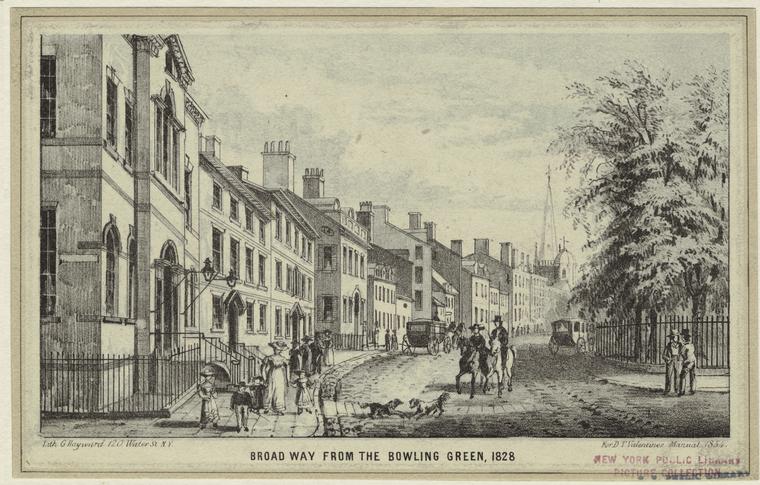 5) George Washington lived here. No really. He had two residences here during the time when New York was briefly the nation’s capital. Â The first, over on Cherry Street, provided him and his wife Martha with breathtaking views of the East River, but they soon found it quite unsuitable. Â So inÂ 1790Â they moved to a home at 39-41 Broadway, at the northern tip of Bowling Green, residing here until the capital was finally moved to Philadelphia.

6) Bowling Green was still the destination for the New York’s oldest, snootiest families at the start of the 19th century. Â In fact, itÂ was given a rather inappropriate nickname — Nobs Row.Â As the town moved northward, the wealthy left their houses around Bowling Green.

7) In the 1820s, the first velodrome was situated near Bowling Green featuring a precursor to the bicycle called the draisine. Â New Yorkers loved this curious device. “Near Bowling Green these vehicles were first exhibited. Â Around City Hall Park and the Bowery, at all times of the days, riders might be seen.

8) Bowling Green soon became known as a transportation terminus for coaches and omnibuses which strode up and down Broadway. In the 1820s, when the entertainment venue Castle Garden opened, the streets around Bowling Green became cloggedÂ with busy street life. Â By the 1850s, Castle Garden became the principal immigration station, fillingÂ the once elite neighborhood withÂ a bustling cross-section of classes. In the 1890s, New York’s short-lived cable-car line terminated here.

9) The park was much abused and generally unimpressive during the 1950s and ’60sÂ but wasÂ rebuilt during the 1970s toÂ approximately resemble Â how it once looked. Â The fence which surrounds the park is the original which was first placed around the park in 1773. Â This makes it one of the oldest free-standing artifactsÂ in all of Manhattan.

10) During the late 1980sÂ the park met its weirdest neighbor yet — the Charging Bull sculpture by Arturo Di Modica. Â Arguably better known and more beloved by tourists,Â the bull was originally planted illegally in front of the New York Stock Exchange. Â By the time the city removed the statue, New Yorkers had come to love it. Â They eventually placedÂ it next to Bowling Green in 1989.

Great photos, though the ones labeled 1900 and 1915 are actually pre-1898, since the Bowling Green Offices Building (large white building in the first photo at beginning of article) was completed in 1898 and is not seen in the photos marked 1900/1915.