Her torch may shine bright, but what story is she hiding under that copper-toned skin? The Bowery Boys bring you the story of the dinner party that created an American icon.

Her official name is the Statue of Liberty Enlightening The World. You can find a full survey of her measures here. Two facts of interest to me: her copper plating is only the width of a couple pennies. Incredible that something so relatively thin has been able to weather 121 years.
Especially considering fact no. 2: during 50 mph winds, the Statue of Liberty moves approximately three inches. Bartholdi and Eiffel managed to create a structure that could conform to sea winds and temperature changes without causing serious damage to the overall structure.

Seen here, one hand, clutching a book with the date July 4, 1776 written upon it, awaits its copper skin at the foundry of Gaget, Gauthier et Companie. 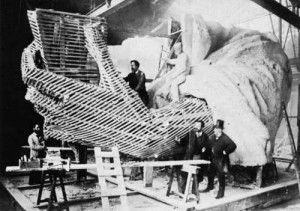 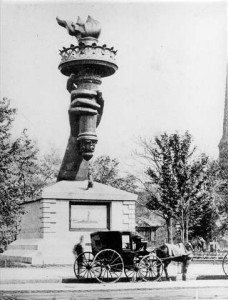 Her other hand meanwhile was busy taking a tour of America. The completed right arm and torch stopped first at the Philadelphia Centennial Exposition in 1876, the 100th year of America’s birth (and technically the date the gift of Liberty was celebrating). It then travelled back to New York, where it became a comfortable fixture of Madison Square Park in 1884.

My blog entry from Monday was about the gravesite of Gen. William Worth, which seems peculiarly placed in middle of a traffic island. To get a better sense of how it was situated, here’s a picture (which I got from Forgotten NY) with Worth on the left, Fifth Avenue cutting through, and the arm of Ms. Liberty to the right.

And to think today, just a few feet to the right, out of frame, now stands the Shake Shack. 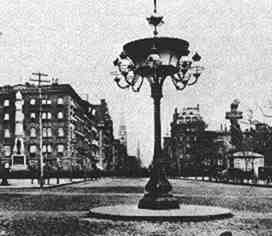 Eventually the arm and torch was returned to France, where the entire structure was put back together in the foundry, to the delight of 300,000 visitors, including one Victor Hugo, who said, “To the sculptor form is everything and is nothing. It is nothing without the spirit – with the idea it is everything.” 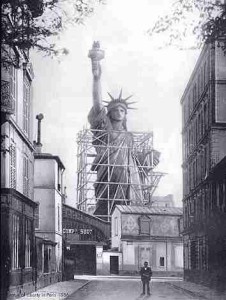 The designer of the pedestal was Richard Morris Hunt, best known for designing the Metropolitan Museum of Art as well as the sumptuous mansions for the Vanderbilt family. (CNN’s Anderson Cooper probably ran around in one when he was little.) Hunt trained at the Paris’ Ã‰cole des Beaux-Arts which would later see William Van Alen, the architect of the Chrysler Building.

My harangue against my fellow Americans in their rather feeble attempts at fund-raising to build the pedestal obscured my general admiration for the design of the pedestal itself, which had to be understated but reflect some of the statues general themes. For instance, the shield pattern that runs along the side — click to see the detailing more closely — creates a dialogue with Liberty’s classical features and underscoring of strength and protection. 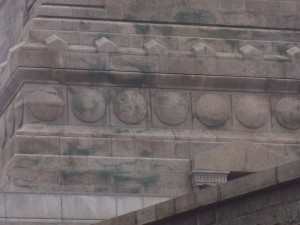 Even as the pedestal was still being constructed, the Statue arrived in New York harbor. Here, some workers unpack her feet at the base of the foundation, what was once a star-like fort: 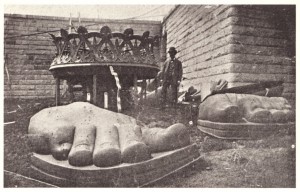 A stroll around the base of Lady Liberty grants you a terrific view of Manhattan, Brooklyn and parts of New Jersey. Along the path are some contemporary sculptures of five pivotal figures of Liberty’s legacy (all detailed in our podcast) — Bartholdi, Gustave Eiffel, Ã‰douard RenÃ© LefÃ¨vre de Laboulaye (pictured below), Joseph Pulitzer and Emma Lazarus. 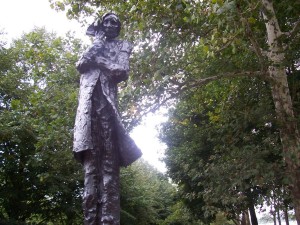 This strangely creepy depiction of Bertholdi also greets visitors. (Click the pic to see what the curious sign says tucked in his jacket.) 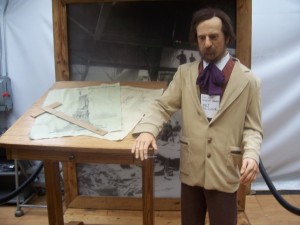 In a prescient bit of fund-raising, Bartholdi sold miniature versions of Lady Liberty before it was even constructed. That honored tradition of capitalism still holds strong throughout every tourist zone in New York City, Liberty Island itself certainly no exception. 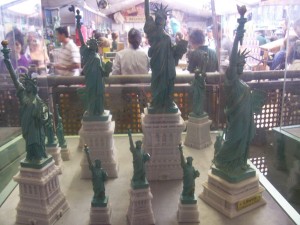 By the way, the Statue of Liberty, for many years was actually a deep brown color. When copper oxidizes, however, it turns that rich green color, which prevents it from eroding through rust. The copper used in the construction was so durable that during the extensive 1986 renovation and clean-up of the statue, none of it needed to be replaced. Although Eiffel’s contributions overshadowed those of the original architect EugÃ¨ne Viollet-le-Duc (who died before the statue was completed), Eugene chose the copper, mined from copper ore obtained in KarmÃ¸y, Norway. 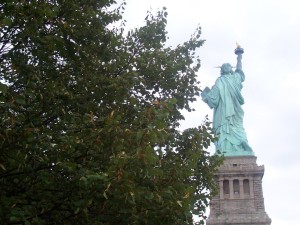 Click here to see our history of the Statue of Liberty … as she appears on album covers.