After spending quite an amount of time in the Revolution, then taking you to church, I’m taking it easy on you (and me, for that matter) and focusing on New York in the movies.

New York City is without a doubt the most photographed and filmed city in the world. Even when filmmakers shoot in other cities — such as Toronto — it’s still New York.

For the week, I’m presenting my incredibly subjective list of the ten best movie scenes shot in New York City. This doesn’t quite equate to the ten best movies about New York. These are just the ten images that I think in total represent the reasons that people continue to turn NYC into the world’s largest back lot. I’ll reel out the first nine today through Thursday; the topic of my number one pick will also be the topic of this week’s podcast.

This list only features scenes that were actually filmed in New York without too much enhancement or special effects, so no sci-fi (King Kong, Ghostbusters, Men In Black, I Am Legend). I also avoid scenes that are obviously in New York City but are interiors with no distinguishing features (‘You talkin’ to me?’ and ‘I coulda been a contender’ both spring to mind.)

I’m obviously going to leave out a few favorites, so after Friday drop me an email of what I’ve left out. I’ll list the notable omissions next week.

FYI, I give 11th place, honorable mention to Marilyn Monroe’s dress-blowing scene in the zany sex comedy ‘Seven Year Itch’, But you’ll have to read here to find out the technicality that excludes it from this list.

Alfred Hitchcock loved using New York as a set piece. He put Jimmy Stewart in a wheelchair here, cooked up a claustrophobic mystery, and used the Statue of Liberty to great effect.

In North By Northwest, he engineers a chase through Grand Central Terminal featuring Cary Grant in shades alluding capture, eventually finding himself on a train with Eva Marie Saint. What makes this scene so alluring is that it’s actually at Grand Central and prefaced by an awkward scene involving a fake United Nations. (Hitchcock couldn’t get permission to film there; nobody could until Nicole Kidman.)

By merits of it being a Hitchcock film, the scene is zippy and glamorous, all the more because Hitch uses a crane shot to follow Grant from one corner to the other, a gravity-less vantage that for a moment takes you above the busiest place in New York.

By the way, once Grant gets on the train, we’ve clearly gone back to a staid movie set. However Grand Central was not the only real location used; you also have some great old views of The Plaza Hotel and the Oak Room. 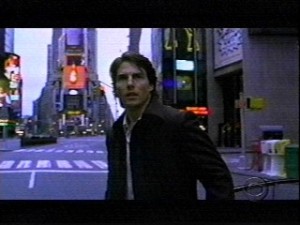 See, this list isn’t about good movies. Whatever you think about this Cameron Crowe remake, this fantasy sequence featuring Tom Cruise in a completely empty Times Square is remarkable by merits of them pulling it off at all.

The scene was filmed on an early Sunday morning in November 2000 and they had to shoot quickly. Their efforts to create an eerie setting were almost thwarted by the Dow Jones news ticker, in the background proclaiming details about the disputed Bush-Gore election. They were given permission to digitally erase the information.

Studio execs had also asked Crowe to digitally erase the World Trade Center, which by the film’s release date had been destroyed. This, Crowe did not do.

It’s not Taxi Driver’s best known scene, but it perfectly employs New York at night in a twisted noir-ish way. Travis Bickle (Robert Deniro, essentially silent during the scene) pulls up a passenger to the curb. That passenger happens to be played by Martin Scorsese himself, who argues with Bickle to leave the meter running.

We then see that classic of noir fixture — a woman’s silhouette in the window — and Scorsese goes off on a sick and disturbing explanation of what he intends to do to her, his estanged wife.

By the way, the scene that proceeds this one — of cabbies gabbing at a diner — is filmed at the Belmore Cafeteria, a classic old-style diner which once sat at 28th Street and Park Avenue South. This site has a great tribute to the old joint. Here’s a shot of its dazzling exterior: 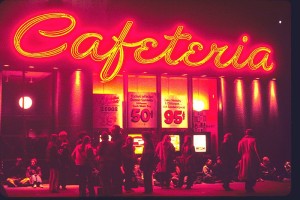