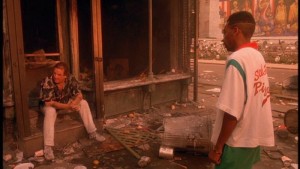 My list of New York’s best movie scenes continues with two in Brooklyn — and one that almost gets there….

Spike Lee is only one of a few directors who knows how to turn New York City into a character in his films. With ‘Do The Right Thing’, he photographs a typically drab streetcorner in Bedford-Stuyvesant with the sorts of color and pizazz more associated with 1950s musicals. Better to match the residents — everybody from the old men on the corner to the customers at Sal’s Pizzeria — a cross-section of vivid characters and a balance of different races getting along. Until, of course, Mookie throws that trashcan through Sal’s window.

The film is loosely based on a violent 1986 incident that occured in Howard Beach, Queens, involving the death of a black teenager after being harassed with his friends at a pizzeria. Mookie’s act of violence — the “did he do the right thing” moment — sparks a mob scene that greatly parallels many incidents during the New York blackout of 1977.

Not suprisingly, Lee goes back to the motif of the ‘hottest day of the summer’ in another great movie actually set in 1977 — “Summer of Sam” — a film loaded with on-location shots in Queens and the Bronx. 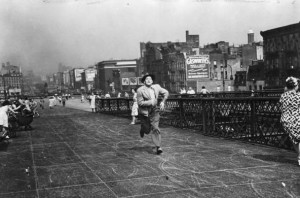 The Williamsburg Bridge’s best moment ever in a recorded medium is this scene in the Naked City, the climactic chase and shootout in a film already known as one of the best look New York City movies ever made.

Forget the standard issue film noir plot, fun but unspectacular; it’s all about William H. Daniels’ verite cinematography, which won him an Oscar. The Naked City is one of the first film to shoot almost everything on location in New York, 107 on-location scenes in all. The film, and New York, looks better the older it gets.

Among its more famous locales include the ole Roxy Theater, the Whitehall Building, and the City Morgue (!), but its crowning scene is its last, a breathtaking shoot-out literally up in the proverbial rafters of the Williamsburg Bridge. NO film (not even the next on my list) has ever used a bridge to such tangible effect. 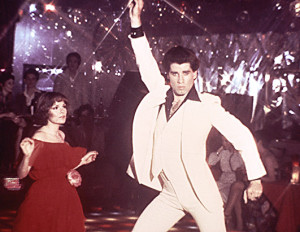 I couldn’t not pick the famous danceoff scene with Tony Manero and Stephanie Mangano. It defines the style of New York nightlife outside the VIP area of the 1970s. But for the record, Saturday Night Fever has two equally beautiful scenes using New York backdrops that are utterly fabulous — Tony strutting down the street with paintcans and, of course, the tragic encounter at the Verrazano-Narrows bridge. I can probably go on record and say ‘Fever’ is the coolest movie about New York City ever filmed.

I’ll save myself some typing and direct you to my writeup a few months ago on Saturday Night Fever and the club where it was filmed 2001 Odyssey, which also includes a report the fate of that sacred dance floor. 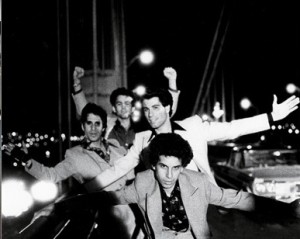