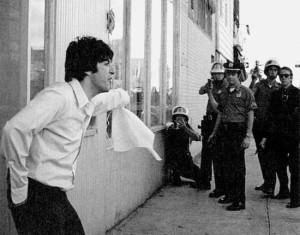 It’s funny that the decade in which New York is truly at its lowest — crime at its all time high, fiscal crisis, the city’s landmarks falling apart — also happens to be the best decade ever for films about New York. I’ve already listed Taxi Driver and Saturday Night Fever, but you could wax on endlessly about New York films in the 1970s: Three Days of the Condor, Marathon Man, The Godfather, Annie Hall, The Taking of Pelham 1-2-3, Mean Streets, Shaft, All That Jazz, Network, the Panic at Needle Park.

And of course, these three…. 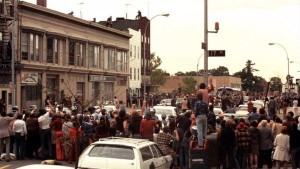 Like Do The Right Thing, this blistering Sidney Lumet flick is based on a real incident, a bank heist in Gravesend, Brooklyn — at 450 Avenue P, to be exact. (The only thing you can steal from there now is a mammography or an ultrasound; it’s the now the Brooklyn Medical Imaging Center.) Lumet moved the action to the Brooklyn neighborhood of Windsor Terrace, at Prospect Park West between 17 and 18th streets. He probably couldn’t have chosen a better block. With the park in the distance, the streets fill with police, random photographers, on-lookers, TV cameramen, buses and shop owners, and the result is like a self-contained swarm.

All to observe Al Pacino, playing Sonny the charming but befuddled bank robber, holding hostages and, in the pivotal scene, rallying the crowd to his side with cries of ‘Attica! Attica!’ (The Attica prison riots, spurred on by accusations of prisoner torture, had just happened, in 1971.)

Sadly the bank and many of the shops on the street have been replaced with — quel suprise! — condominiums.

However, the neighborhood Holy Name Roman Catholic Church (at 245 Prospect Park West), featured in the film, is still hanging around. The bank interiors, although not filmed in the actual bank, were still filmed in Brooklyn — in a nearby warehouse. 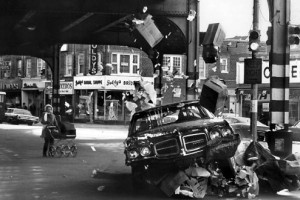 Hysteria
3. The French Connection
Chase under a train
The car chase that defines all car chases zipped under the elevated train from Coney Island for a death-defying 26 blocks. I wrote about the wacky logistics of the filming here . Perhaps with the exception of I Am Legend or The Naked City, this William Friedkin film could be considered the film that most used New York, as scenes were evidentally shot in almost every corner of the city. 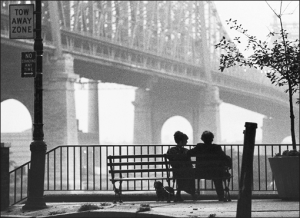 Magic
2. Manhattan
Isaac and Mary have a chat

I’m sorry, but Woody Allen’s 59th Street Bridge scene is just him showing off. And that’s why it’s so perfect, the defining shot in what has commonly been called his “love letter” to the city. The quintessential New York director, essentially rendering a rather unromantic bridge into the most beautiful site in the entire city — the entire world, at least you think so while watching it.

“This is just a great city. I don’t care what anybody says,” Woody remarks to Diane. (Their characters are Isaac and Mary, but who cares?)

You’d think it would be easy to recapture this scene yourself, but alas, there’s no longer a bench. By the way, for some reason, ‘Manhattan’ is considered to be Woody Allen’s least favorite film that he’s made. Really Woody? Worse than Scoop? Shadows And Fog? The Jason Biggs-vehicle Anything Else?