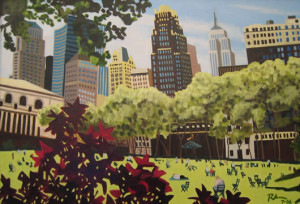 Above: Painting of Bryant Park by artist Mike Rohner. Visit his website for some other lovely works.

Editor-poet William Cullen Bryant, the 19th century’s most influential publisher of the New York Post, never lived to see Fashion Week or the yearly outdoor Summer Film Festival, the star events hosted in the park that was named after him, Bryant Park. Of course, prior to becoming that park, it might not have been considered the most flattering memorial.

Like Washington Square before it, Bryant Park was declared a potter’s field in 1823, a public cemetery. Think about that this summer as you fight for that stretch of grass before the super-popular film screenings on Monday nights.

Many New York parks share this as part of their history. At least in the case of Bryant Park, however, the bodies were eventually moved out to Ward’s Island. (Unlike Washington Square, where you apparently can’t dig without finding a few human remains.)

Two remarkable landmarks of New York’s past sprung up here next. First, the Crystal Palace, a dazzling exhibition center of glass in a delicate iron skeleton, held examples of national industrial progress during 1853 Great Exhibition, an early ‘world’s fair’. Within five years, it would be destroyed in a fire, the entirety of the technological innovations inside destroyed. 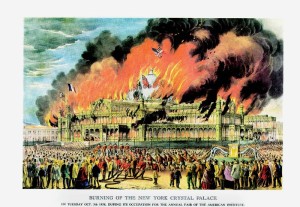 Ironically enough, it sat right next to New York’s largest depository of water, the fortress-like Croton Reservoir, constructed a few years earlier in 1847.

More details on the Palace and the Reservoir can be found in our podcast of the New York Public Library, the elegant building which has stood on the site of the Reservoir since 1911.

So how did Bryant wind up here? By the 1880s, plans were underway to remove the Reservoir, and with the eastern portion of the lot given to the library, a park was planned for the Western part, officially called Reservoir Square.

Bryant, one of New York’s most respected men, was a literary genius, a powerful political figure, and godfather to Central Park, having proposed the idea in the Post and run the design competition that eventually picked Oldstead and Vaux as the park’s eventual architects.

In 1884, the name was changed to honor one of New York’s most prolific citizens. However, by the time Bryant died in 1888, not much had actually been done to beautify this early version of Bryant’s park. In fact, it sounds a bit like a nightmare.

It sat next to a massive construction site over a decade, as the Reservoir was ripped down and the Library slowly built in its place. Making matters worse, the elevated railroad had been built right across its western edge in 1878. Bryant Park had to have been one of the loudest places in the city. The replacement of the elevated for an underground subway only made matters worse, as the park was torn up then used as a storage yard for subway materials.

The park was rescued by Parks Commissioner Robert Moses and designer Lusby Simpson, who swept out the debris and shaped a French-style courtyard and walking paths, an open space that would only seem more idyllic as the city skyscrapers crept up around it. After the now-predictable slump in the 1970s, the park is now midtown’s most perfectly kept public space. The fashion industry’s showcase Fashion Week arrived here in 1993, raising the park’s prestige even further. 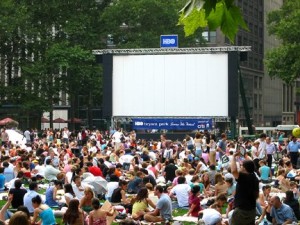 And that imposing statue of Bryant (below), with a prime seat to the film festival overlooking the park? He came along in 1911, at the opening of the library, a tribute to the Post publisher designed by New York sculptor Herbert Adams. 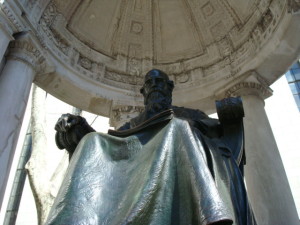 One of my favorite NYC buildings is the old American Radiator Building on the park’s south side … I think it’s now the Bryant Hotel. It looks like a gigantic chocolate cake with gold icing. (Or maybe I’m always just hungry.)