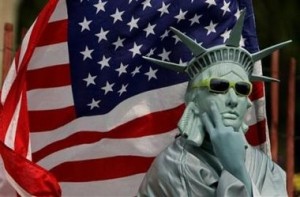 You know an area of New York has achieved tourist saturation when the first ten people you see are all identically dressed as the Statue of Liberty.

Performance artists regularly delight audiences near the city’s marquee tourist attractions — South Street Seaport, Central Park, Times Square. Most are truly worthy of the attention: the charismatic juggler, the dance troupe, even (though I hate to admit it) that person who acts like a robot making hydraulic noises.

But the army of Liberty impersonators are different. First of all, there’s usually a group of them, the largest number collecting themselves outside Castle Clinton, greeting visitors who are awaiting to see the real Liberty. Seeing four or five Lady Libertys is startling, surreal, even nauseating. It’s even exhausting looking at so many people draped in green wearing masks or face paint on a hot spring day. 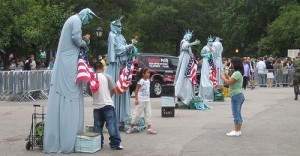 Bonnie, a New York blogger, pinpoints exactly what it is that’s so ominous about them:

“The effect is actually rather eerily reminiscent of the killer from the “Scream” movies (actually I think somebody needs to make a horror movie set in NY and featuring one of these guys) …. on a dreary day like today you get the even weirder scenes of a busker who’ve gone on break leaving a small heap of folded green robe, and a Statue of Liberty heads (wearing shades) stuck on a pole” 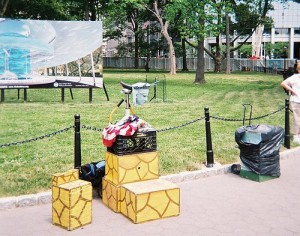 Of course, Statue of Liberty replication is not a new phenomenon. In fact, you could say the replicates came before the real thing. 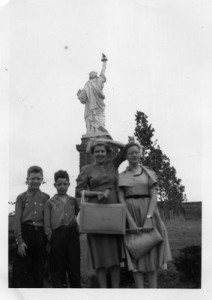 France’s gift to the United States — probably the best gift ever — was wholly funded by French citizens. Creator FrÃ©dÃ©ric Auguste Bartholdi devised a host of creative fund-raising ideas, including a concert series and a Liberty themed lottery. But he also created Lady Liberty souvenirs, miniatures of his design, as a way to boost enthusiasm and raise money. By 1889, Liberty was in New York harbor, but she had already started to spawn.

The French have their own Liberty which stands a little under 38 feet tall (or about the combined length of all the Statue of Liberty impersonators you can find in Battery Park at one time) within sight of the Eiffel Tower, planted near the Granille Bridge on the same date as New York’s. Later, her original formative model, a bronze Bartholdi had used to impress investors and demonstrate the statue’s scale, was donated to the Jardin du Luxembourg in 1900. Since then various other versions have been spotted through France, including Bartholdi’s hometown.

The Statue’s first and perhaps only legitimate American sister sat for decades atop the former Liberty Warehouse at 43 West 64th Street. Mini Liberty, close in design to one of Bartholdi’s actual fund-raising miniatures, sat overlooking the Upper West Side from 1891 to 2002, when she removed and given an honorific spot at the Brooklyn Museum.

You can thank the American proliferation of Libertys on the Boy Scouts. During the 1950s, the Scouts donated over 200 ‘little sisters of Liberty’ to towns across 39 states and several territories. Kansas alone allegedly received 26 Liberty statues, possibly because the whole initiative was started by a Scout volunteer in Kansas City, Mo.

These replicas were usually not sculpted with the same care that Bartholdi brought to his replicas, with haphazard faces, odd scale and imprecise detailing on the 8’4″ copper statues. Of the dozens dispersed across the nation, at least a 100 have been identified today. After Sept. 11, many communities have taken great pride in restoring their li’l Libertys. 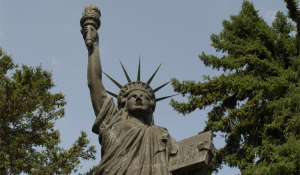 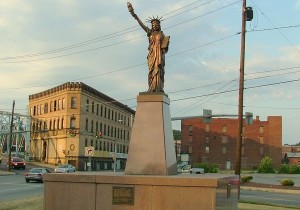 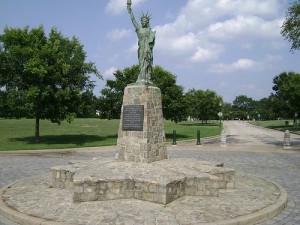 Liberty is a victim of her own symbolic nature. As small town America now had their copies, Liberty was spawning herself on Liberty Island in the form of souvenirs that allowed you to become the Statue of Liberty, using foam crowns and torches. Once, immigrants sailing into New York harbor could hope to take advantage of the values that Liberty embodied; now, people could simply embody Liberty herself as a way of taking advantage of some of those values. 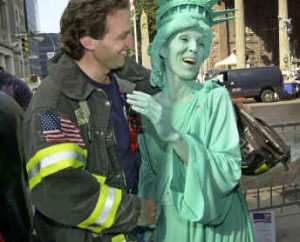 It may be impossible to truly identify the first Statue of Liberty impersonator, but I think there’s little argument about who is the best: Jennifer Stewart.

Stewart began donning Liberty drag in 1989. One clue that she might be one of the very first is her feelings to donning the green in public for the first time: ”I felt stupid. I thought, ‘The only consolation is that no one will recognize me.’

Stewart seems to be the ‘official’ Liberty impersonator, meeting with Rudy Guiliani, Michael Bloomberg and Hillary Clinton and appearing on national magazine covers. But it was that success that brought on the wave of imitators. 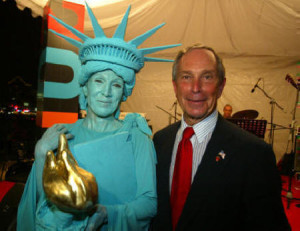 Ms. Stewart may disagree, but one enticement to impersonating a statue is the ability to do so without any real displays of traditional talent. You don’t have to do backflips or breathe fire or pretend you’re Robbie the Robot. She’s stoic in her static. Although I would chime in here and ask, have you ever stood in one place for a really long time with your arm in the air?

And thus came the horde of Statue of Liberty impersonators, at first in performance make-up and stylized robes, later just in masks and sprayed-green sheets. Often she is given sunglasses or any number of patriotic embellishments.

Does repetition dilute meaning, or reinforce it? Interestingly, knowing who is behind the robes might give this borderline annoying trend a bit of resonance. According to an article in the Tribeca Tribune last year, the group of Libertys on a given day at Castle Clinton were all immigrants –“four Colombians, an Ecuadorian, a Honduran and a woman from China.” They were also mostly male performers. Who can’t appreciate a man who stands in a park dressed in drag all day to make a few bucks?

The Statue of Liberty has been duplicated in other, less disturbing ways. Check out our previous history of Lady Liberty on album covers. Or dive back into our older podcast on the Statue of Liberty from last September, with accompanying photo gallery.

And finally, this is just right on so many levels: 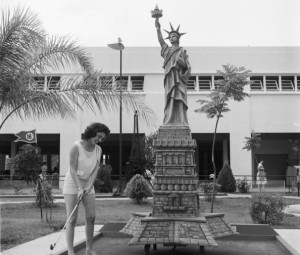 1 reply on “Spawn of the Statue of Liberty”

Thanks for such an interesting post. Lots of good history, cool photos, and informative links. Good stuff!!

Recently one of the green Liberty people returned my lost cell phone. You allowed me to use one of your pictures, and I discovered some great background info about the guy who found the phone via your link to the Tribeca Tribune article.

Here’s a link to my post – and many thanks for your help with it.