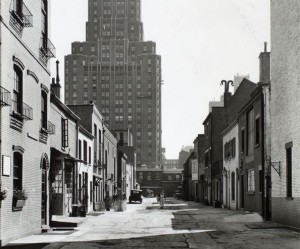 Above: Macdougal Alley in 1936. The plantation home of New Amsterdam director-general Wouter van Twiller would have been situated very close to where this picture was taken. (Find the alley here.)

Greenwich Village has been the heart of New York’s cultural identity for over 150 years, the birthplace of city bohemia, where the upper and lower classes collide, the iconic outsider neighborhood between midtown and the financial district. It’s been New York’s home for counter-culture, gay liberation, artistic inspiration, musical innovation and groundbreaking urban renewal. No surprise that it was named New York’s very first historic district in 1969, even as some of its greatest moments were yet to come.

But why do we even call it Greenwich in the first place? And was it ever really a village at all?

I should preface this early history of the Village by saying that the information below deals with Greenwich Village and its sub-neighborhoods the West Village and part of the Meatpacking District (which actually extends farther north). Despite its name, the East Village is actually considered separate from Greenwich, being part of the Lower East Side.

In the wild days of early Dutch occupation of Manhattan, the area of today’s Village district lay 2-3 miles outside the border of the primary Dutch settlement New Amsterdam. That border is approximately Wall Street today.

Imagine the distance between it and 14th street (the generally accepted northern border of Greenwich Village today) as a gradually populated area of hills, swamps and streams, with only a few dirt pathways cutting through the meadows and dense foliage to lands beyond. There was enough farm land to go around if you were brave enough to settle outside city walls, with fears of attacks from both Indians and other Europeans.

To get an idea of how green Greenwich Village used to be, head on over to the Mannahatta Project and type in any Village street name (start with Washington Square North or any listed below).

Back in the day the shore of Manhattan’s west side approximately lay along today’s Greenwich Street; the rest is landfill from later in Manhattan’s development. Near the location of Gansevoort Street today (yes, the Meatpacking District) lay the first village within the Greenwich Village area — the Lenape Indian settlement Sapokanikan or ‘land where the tobacoo grows’. Sapokanikan was essentially a trading settlement and docking point for many traveling native American tribes.

The Dutch took the tobacco reference to heart. The second director-general of New Amsterdam, the colorful Wouter Van Twiller, built a large tobacco plantation ostensibly for the Dutch West India Company but, Wouter being Wouter, mostly for his own personal profit. Wouter’s plantation occupied most of the West Village; his own home sat on plantation ground, at around the area of 8th Street and MacDougal Street. The plantation would be named for the old indian village and also referred to as Bossen Bouwerie (‘farm in the woods’).

Below: Wouter Van Twiller’s farm is marked #10 on this map by Johannes Vingboons from 1639, one of the earlier attempts at mapping the territory of New Netherland 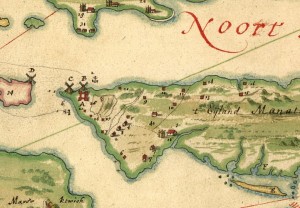 Van Twiller was later dispatched from his duties as the colony’s leader, but he did grant some of his slaves certain freedoms to build their own smaller farms, defenseless along the Minetta Brook (a vital stream that coursed through the region) and on the southern part of today’s Washington Square Park.

Meanwhile, other Dutch companymen came to the region, including two brothers, Jacob and Paulus Van Der Grift, who moved from old Amsterdam to New Amsterdam in 1644 and into this lush area, “co-patroons” of an area that would become known as Nortwyck or Noortwyck (simply ‘north of the city’).

Below: from an 1874 water map designed by Egbert L. Viele, you can see the old Minetta Brook, which formerly cut through the Village district 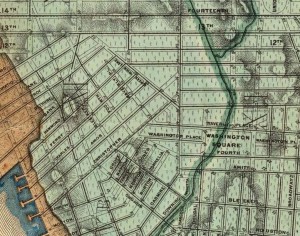 By 1664, the year of the British takeover of the island, the area was essentially dominated by a handful of landowners who had carefully cultivated their property, but had not changed the general properties of the land.

With the British came further development, as well-to-do English citizens began scooping up property for their own lavish mansions. In fact, it became quite fashionable for the wealthier of British citizens, too refined to deal with the growing and quite crowded New York, to situate just outside the city. This is where Nortwyck, a loose assemblage of farms, becomes Greenwich, the domain of idyllic estates.

I’ve seen reference to the name change as reflecting that of the London district of Greenwich, a very tony British resort in the 17th century. But the name may have first come to the area long before the British elites did. According to the New Netherland Institute, a settler in the 1670s, Yellis Mandeville, bought a farm here and named it for an old Long Island Dutch town — Greenwijck, or Pine District.

Once the wealthy British came, it must have seemed natural to simply alter the name to Greenwich, with all the upper-class and luxurious implications that came with it.

There were several principal British landowners of the Village area at this time. One of note, Thomas Randall, would own the area around Washington Square; later, his son Robert Richard Randall would bequeath the area to the city as a respite for retired sea captains and sailors. The city, seeing far greater value to this land for residential townhouses, instead moved the sailors rest home to the northern shore of Staten Island and called it Snug Harbor.

Another, Captain Thomas Clarke, would retire on property further north and call his mansion Chelsea, also named for a London neighborhood (or specifically for a hospital there).

Below: an engraving of the Greenwich Village home of Peter Warren (courtesy NYPL) 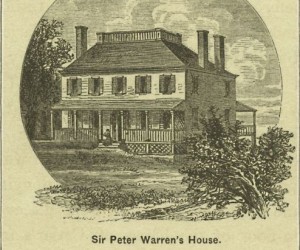 But the real forebear of the Village was an Irishman. Sir Peter Warren, vice-admiral of the British Navy and commander of its New York fleet, who amassed a vast land tract here in the 1740s, almost the entire ‘Green Village’. Warren was without a doubt one of New York’s more renown British citizens. Like the great old New York families that would influence society in the 19th century, Warren’s presence assured that other British clans would race to buy up countryside to create Manhattan’s first suburbia.

By the 18th century, these massive lots would be divvied up and sold off, as demand grew from New Yorkers fleeing the city to escape disease and overcrowding. In these years before far-thinking city planning, the Greenwich lots were haphazardly divided with unorganized streets. This urban chaos was preserved by the 1811 Commissioners Plan, which chopped most of the entire island into uniform blocks but left the Village in its uniquely confounding geography.

Still today, after so many years of living in the city, I routinely get lost there.

4 replies on “Greenwich Village, when it was green and a village”

I have a last will and testament (handwritten on laid paper) dated 1783, the last year of the American Revolution. There is some mention of ‘Mariner’ NY in it, but I can’t seem to find out very much more than some church records of him and his baptism. Can anyone fill me in on this document of Yellis Manderville? It is a two page document in which he leaves his estate to his wife Mary. I will be selling this item. If there is any interested, please inquire to Robert of Cincinnati at; kuntz1@earthlink.net

Hello Robert, I see you wrote this in 2013, do you still have the last will and testament? I am a descendant of Yellis Manderville (Mandeville) am I am interested in the document

[…] to be from a music video for her gorgeous new track, “Sapokanikan” â€” which was theÂ Lenape name for the area now referred to as Greenwich VillageÂ (thus, at least for New Yorkers, substantiating her corn dog-detouring travels through the […]

[…] sadly, no beer). This café is nestled in the “Pine District” (aka Greenwich Village) which used to be filled with swamps and streams –you can still experience them if you take the 1 train in […]