On this day in history, February 26, 1917, the instrumental ensemble Original Dixieland Jass Band recorded the very first usable* jazz recordings in a Victor studio here in New York. I can’t confirm exactly where that studio was, but according to here, Victor’s studios in 1917 were at 46 West 38th Street.

And yes, that’s Jass. They changed it to Jazz a year later. (The term was still coming into its own back then.) And though they started in New Orleans in the Dixieland jazz scene, they made their name in Chicago and moved on to New York in 1916. Oh right, and they were a white ensemble who popularized for white audiences a genre created and performed mostly by black musicians.

They were possibly the first white musicians to make jazz fashionable to New York nightlife; as a result, we can thankfully hold them partially responsible for the coinage of the Jazz Age. For from the moment of that first recording, the youth of the late ’10s went wild for the naughty sound of jazz.

Before the release of this recording, the only way to hear the ensemble was live, and the place to hear them live in New York was Reisenweber’s Cafe, one of the most fashionable clubs of the 1910s.

The restaurant/nightclub hybrid — one of the first true ‘entertainment complexes’ –was owned by John Reisenweber, whose father had owned a small tavern at this very corner in 1856. Needless to say, John was far more ambitious plans.

Below: Columbus Circle in the 1900’s. You can see the Reisenweber’s marquee to the left of the picture, on 58th Street. 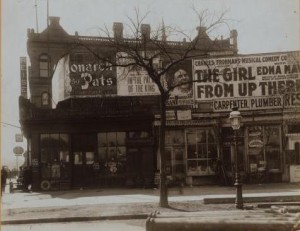 Reisenweber’s was truly a product of the decade, expanding in 1910, closed by 1922. It held court in Columbus Circle at 58th Street and Eighth Avenue during a time when this corner of Central Park was a popular destination for theater goers, of both the high and low brow varieties. The most famous — and respectable — stage in the neighborhood was the Park Theatre (formerly the Majestic) featuring the hottest names in drama and musical comedy. So, naturally, Reisenweber’s became a magnet for theater stars and their champagne entourages.

Producers would fete their leading ladies here, in festivities that would begin in the downstairs restaurant, move to the second floor 400 Club cabaret, pause for a dance in the elegant third-floor Paradise Supper Club (featuring the first dancefloor within a restaurant), and settle in either the cheeky Hawaiian Room on the fourth floor or up at the rooftop garden.

Below: From an advertisement dated March 1917 (thanks to Mule Walk & Talk blog, where there are many more examples) 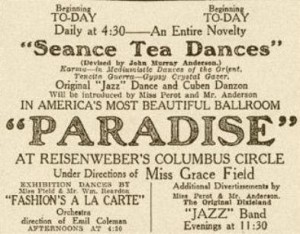 The Dixieland ensemble hit Reisenweber’s 400 Club in January 1917 (thanks in part to a recommendation from Al Jolson) and were an immediate hit, combining furious, syncopated sound with a comedic touch, perfect for a smoky cafe full of trendy New Yorkers. 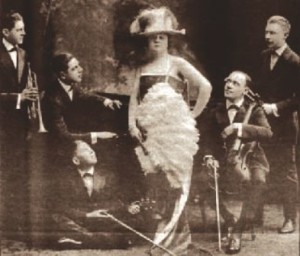 But they weren’t the biggest star at Reisenweber’s. The lady that drew them in 1918 was one of the era’s biggest celebrities and the first star of the Ziegfeld Follies — Sophie Tucker (pictured above).

Tucker was a sassy, vibrant, bawdy performer, hammering out hits loaded with double entendre, inviting starlet pals and even regular cafe patrons on stage to perform with her. Her escapades upstairs to sellout crowds in the 400 room, during her so-called ‘Bohemian Nights’, were so popular that Reisenweber shrugged and remained it The Sophie Tucker Room in 1919.

Reisenweber’s fused together elements that now seem quite commonplace together — music, food, dancing, celebrity, performance — in a way that was both respectable and yet edgy and scandalous for its day. It also introduced a staple of New York nightlife: the cover charge (25 cents).

At its height, Reisenweber’s was one of Manhattan’s best known restaurants, “hous[ing] a dozen dining rooms, employed more than 1,000 in help and seated 5,000 diners at one time” according to the owner’s obituary. 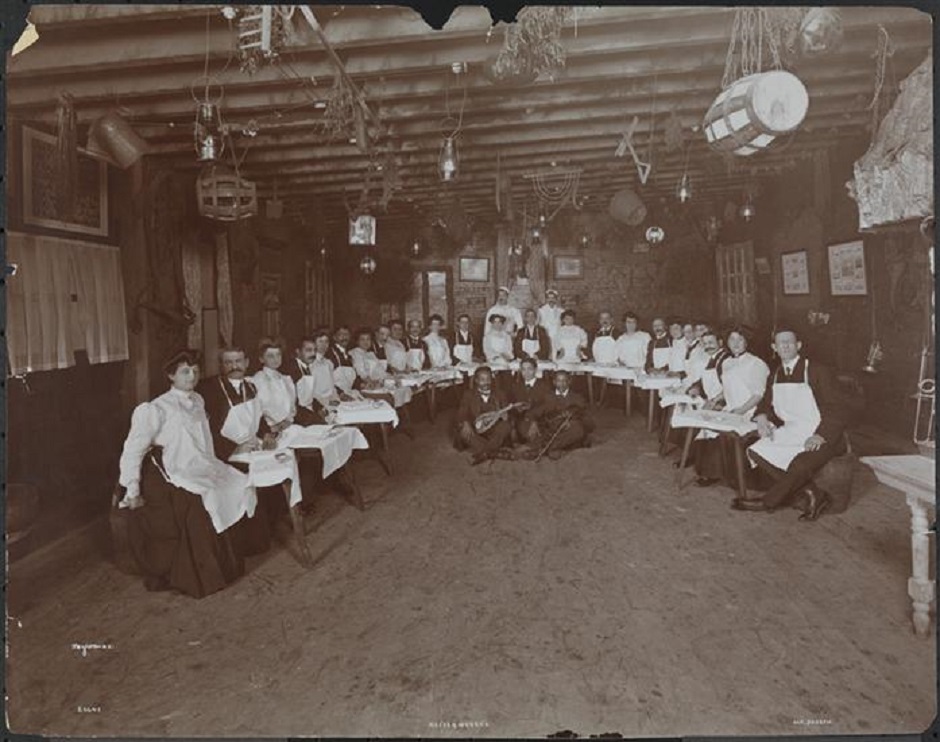 In a way, it mirrored the most appealing elements of its neighborhood: the glamour of the theater, the abandon of the taverns, the glitz of the rich, the abandon of the working class. This mix would perfect itself by 1920, the time of Prohibition, when it would go underground.

The modern nightclub would be born there in the shadows; unfortunately Reisenweber’s would not join it. It was an easy target for temperance groups; screamed the headlines in 1922, “CLOSE REISENWEBER’S, DRY OFFICIALS DEMAND“. Crippled by constant police raids — including a bummer of a raid on New Years Eve 1922 — it was closed for good that year.

By 1925, the Original Dixieland Jazz Band would break up. But Sophie Tucker would thrive during the Roaring 20’s, moving on to movies and radio.

Finally, for your listening pleasure, that recording of the “Livery Stable Blues,” a tune which certainly lit up the floors of Reisenweber’s as the champagne flowed….

*A month earlier, they apparently performed for management of the Columbia Gramophone Company and may have recorded for them, but nothing was ever released.

Hard to tell from the photo just where Reisenweber’s Cafe was on Columbus Circle. It looks to me it might be where Rumplemeyers later appeared. Could you find out what appeared at the address after 1922?

https://uploads.disquscdn.com/images/a743fff76ccaebd78792baf85d7afbe905e3591e40480eafc333d8fbe4ce770c.jpg I have an approximate 2 inch metal bulldog with “Reisenwebers Columbus Circle 1914” on his back. Does anyone know anything about this?

I grew up on that block in the early 1970s.
I spent many hours in the ground floor Woolworth’s and our local pizzeria ‘Little Italy’ was also on that level.
Later on I practiced at C.K. Kim’s Tae Kwan Do school on the third floor.
But I never guessed at the history of that building or had any clue.
I just became aware of Reisenweber’s in 2022.
But yes, I threw front kicks and broke boards where folks danced the Hawaiian dances 70 years earlier.

A german relativ from the founder of the cafe is a friend of mine. He is the mayor of a city here in Bavaria. If anyone know of any living family members, we would love to know