Skip to the content
The soft luminescence of electric light brings a mysterious glow to City Hall, the New York World Building and the newly opened City Hall subway station in 1904.
PODCAST The streets of New York have been lit in various ways through the decades, from the wisps of whale-oil flame to the modern comfort of gas lighting. With the discovery of electricity, it seemed possible to illuminate the world with a more dependable, potentially inexhaustible energy source.

First came arc light and ‘sun towers’ with their brilliant beams of white-hot light casting shadows down among the holiday shoppers of Ladies Mile in 1880. But the genius of Menlo Park, Thomas Edison, envisioned an entire city grid wired for electricity. From Edison’s Pearl Street station, the inventor turned a handful of blocks north of Wall Street into America’s first area entirely lit with the newly invented incandescent bulbs.

The home of Samuel Leggett, the first to be illuminated with gas lighting, at 7 Cherry Street. This home stood  just a few blocks from the location of Edison’s Pearl Street Station (255-7 Pearl Street), which would also change the way people consider lighting their city. (NYPL) 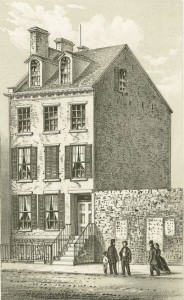 Inside the Pearl Street Station: Direct current surged through Edison’s generators to the neighboring blocks. 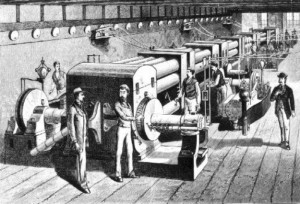 Laying the electrical wires under the streets of the blocks surrounding the Pearl Street station was an arduous, potential dangerous task. It took well over a year to complete the job. (Courtesy NYPL) 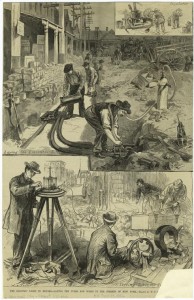 ‘New York The Wonder City‘, and indeed it was, thanks to electricity. Whole neighborhoods, like Times Square and Coney Island, were defined by it. Landmarks like the Brooklyn Bridge, thoroughfares like the Bronx’s Grand Concourse and even Broadway itself were transformed at night by electric power. (NYPL) 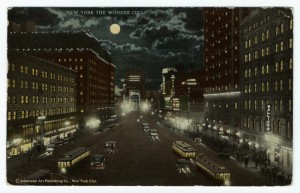 Nikola Tesla, the brilliant Serbian inventor who spent his final decades in New York living in hotels and communing with pigeons. 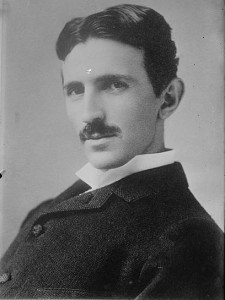 On the fiftieth anniversary of the invention of the lightbulb, an elderly Thomas Edison ‘reinvents’ it in 1929 at a reconstructed laboratory in Dearborn, Michigan, to the delight of Henry Ford and newly elected President Herbert Hoover.

And finally, footage of the death of renegade Coney Island elephant Topsy, electrocuted in an Edison experiment of the viability of electric power to kill.

On Edison’s behalf his agents would pay kids 25 cents for their dogs and then ‘Westinghouse’ the poor pooches in the name of experimentation. His goal was to make George Westinghouse and Nicola Tesla’s electrical current system look bad. He honestly testified that he never personally bought an dog or electrocuted an animal. It is a shame Thomas Edison goes down in history for his ‘genius’.

[…] Samuel Chester Reid, an officer in the United States Army during the War of 1812, was living at 27 Cherry Street when he designed the present pattern of the American flag of stars and bars. Other famous Cherry Street residents include William “Boss” Tweed (born at No. 24),Â  John Hancock (No. 5), and Samuel Leggett, founder of the New York Gas Light Company (now Con Ed), whose home at No. 7 Cherry Street was the first in New York to be illuminated by gas. […]