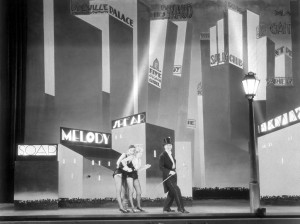 The second film to ever win the Academy Award for Best Picture was hardly a movie at all.

‘The Broadway Melody’, a frothy Hollywood revue about the mounting of an frothy Broadway revue, was a total celebration of every strength and weakness of the early Broadway stage, and a hopeful sign that the New York entertainment world would still wield some influence over its West Coast counterpart.

“Before an enthusiastic throng there was launched last night at the Astor Theatre a talking picture teeming with the vernacular of the bright lights and back-stage argot,” began the New York Times’ original review by Mordaunt Hall, when the movie opened on February 8, 1929.

One of the first-ever movie musicals, ‘Broadway’ was, of course, not filmed on Broadway, but in Hollywood, on an MGM soundstage.  Even when movies were regularly filmed in New York in the early years, they were rarely filmed on an actual Broadway stage.

But the movie’s opening shot is within an office on Tin Pan Alley, that sector of songwriters at 28th Street and Broadway who changed American pop music.  The melody of the film’s title is delivered to Zanfield (a thinly disguised Florenz Ziegfeld) who uses it as a vehicle to make stars out of a couple freshfaced sisters.

The puffy love triangle at the heart of ‘The Broadway Melody’ is merely an excuse to launch various musical numbers in the vaudeville-variety style.  The movie was produced at astonishing speeds; filming began in October 1928 and was ready for its two-city premiere (Grauman’s Chinese Theater in Los Angeles, the Astor Theatre in New York) by early February.

The Astor Theatre, in Times Square at Broadway and 45th Street, played host to ‘The Broadway Melody’ for an entire year.  Some might have thought that deeply ironic, as the Astor had once been a legitimate stage that permanently switched to motion pictures in 1925.  And with great success it was now exhibiting a motion picture about the legitimate stage.

Below: The Astor Theatre in 1936, exhibiting another Broadway-themed film that would go on to win the Oscar for Best Picture —  The Great Ziegfeld (Courtesy LOC) 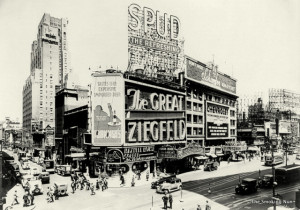 It’s been claimed that the film was made by MGM’s Irving Thalberg on a suggestion from the owner of the Capitol Theatre, up the street from the Astor.  If so, its debut here must have been a real slap in the face!

In this tenuous day of movie sound, many were unsure people a film with music would work.  “Although the audible devices worked exceedingly well in most instances,” Hall continued in his review, “it is questionable whether it would not have been wiser to leave some of the voices to the imagination, or, at least to have refrained from having a pretty girl volleying slang at her colleagues.” 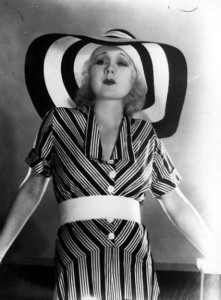 Audience members, especially those in the Astor’s $2 reserved seats, were rapturous for it.  “‘Broadway Melody’ has everything a silent picture should have outside of its dialog,” praised Variety in 1929.  A basic story with some sense to it, action, excellent direction, laughs, a tear, a couple of great performances and plenty of sex….It’s perfectly set at the Astor.  And will it get dough around the country. Plenty.”

At right: Anita Page, one of the stars of ‘The Broadway Melody’, from Flushing, Queens!

The very first Academy Awards the previous year had rewarded serious fare — and all silent.  The first Best Picture winner, ‘Wings‘, had also been a big box office hit in New York, making its debut in August 1927 at the Criterion Theater, just one block away from the Astor!

But Oscar voters went carefree for their second Best Picture winner. Additionally, ‘The Broadway Melody’ became the first sound picture to be awarded the Best Picture Oscar. And the first of a great many to find inspiration in that great big city on the opposite coast.

It would also introduce a lasting connection between the movies and stage musicals, a connection that still lasts today with the Oscar-nominated ‘Les Miserables’, which had its Broadway debut on March 12, 1987 at the Broadway Theatre (Broadway and 53rd Street).