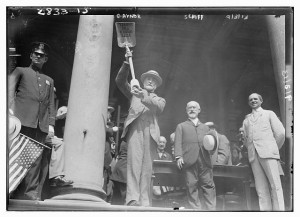 Mayor William Jay Gaynor’s final appearance at City Hall was at a notification rally, declaring his independent candidacy.  He brandishes a shovel as a symbol of a new era of subway construction (the eventual fruits of the so-called ‘dual contracts’ which had finally be agreed to earlier that year.)

Today’s mayoral primary falls on a very grim anniversary in New York City political history.  One hundred years ago today, Mayor William Jay Gaynor collapsed and died while on a voyage to Europe, succumbing to an assassin’s bullet which had been lodged in his throat for over three years. 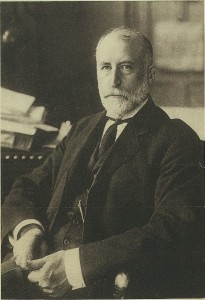 Gaynor was not in New York when he was shot, and he was not in New York when he finally succumbed to its effects years later.  On August 9, 1910, he boarded a German ocean liner in Hoboken, New Jersey, for a planned trip to Europe. A disgruntled dock worker James J. Gallagher approached and shot him through the neck.  The moment was gruesomely captured by a New York World photographer.

Although the injury derailed Gaynor’s presidential ambitions, it did not prevent him from leaving office.  The bullet remained stuck in his neck, slowly weakening his health and eventually deterioriating his ability to speak.

But he remained a feisty opponent of city corruption. So much so that corruption-fueled Democratic machine Tammany Hall refused to support his re-election bid in 1913, throwing their support to judge Edward E. McCall, a more pliant candidate to their whims.  McCall would run against Fusion candidate John Purroy Mitchel, the firebrand reformer and president of New York’s Board of Aldermen (city council).

Gaynor would not be sidelined.  On September 3, he announced an independent run for the mayor from the steps of City Hall.  To a crowd of 5,000 supporters, Gaynor’s secretary had to read his speech for him as he was unable to raise his voice due to his injuries.  At the very end, however, as his secretary declared the mayor’s intention to eradicate graft, Gaynor leaped to his feet and cried, “Yes, that is what we are going to do — shovel all those miserable grafters into the common dump!”

Gaynor at his candidacy announcement, buffered by supporters 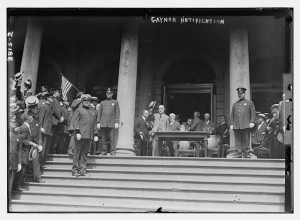 The following day, he boarded another ocean liner with his son, intending to convalesce for two or three weeks.  It was unannounced voyage — Gaynor naturally wanted to keep his deteriorating condition quiet —  although the newspapers found out and splashed it upon their front pages.  “It was a feeble figure that went slowly up the gangplank leaning heavily on the arm of his son Rufus,” said the Evening World.

He was intending to return on September 21.  However, six days into his voyage, on September 10, the mayor finally succumbed to his wounds, aggravated by other afflictions in his stomach and lungs.

His body was returned to New York on the RMS Lusitania nine days later.  The following day, his body lay in state at City Hall as thousands of mourners paid their last respects.

Gaynor’s passing turned the coming election into a free-for-all, with the remaining candidates scrambling to appeal to the former mayor’s moderate voting base.  In the end, Mitchel was elected that November, becoming the city’s second youngest mayor in history.

A memorial for Gaynor was placed in Cadman Plaza in Brooklyn in 1926, inscribed with the anti-corruption slogan “Ours is a government of laws not men.”  Gaynor lived in Park Slope at 20 Eighth Avenue.

Below are some images from his funeral at City Hall, September 20, 1913

All images courtesy the Library of Congress 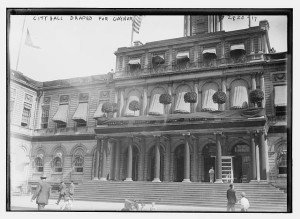 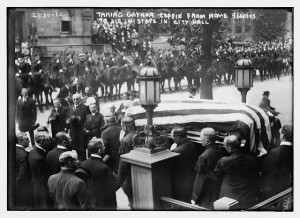 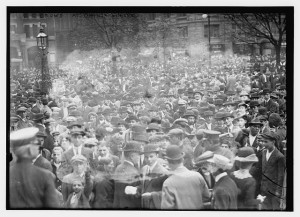 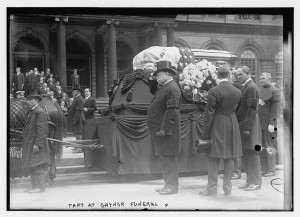 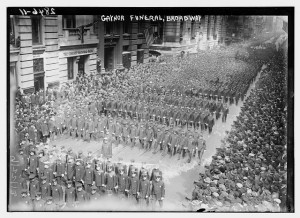