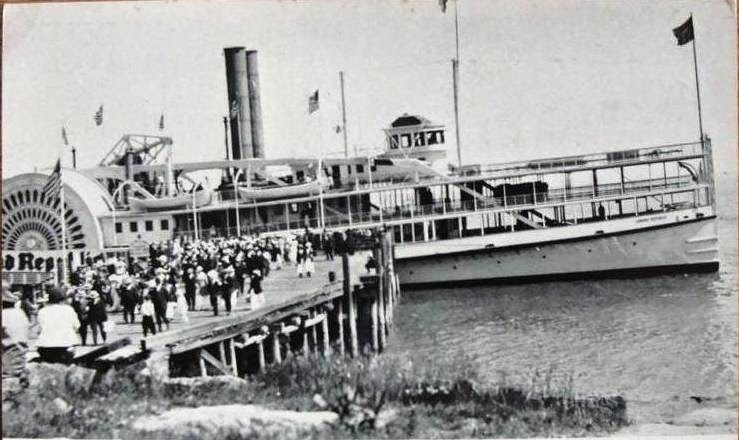 Above: The Grand Republic steamship. As you can see from its paddlewheel, it was a twin to the General Slocum [source]

This could not have made New Yorkers feel very safe about even the briefest of river excursions.

Days after the General Slocum excursion steamer caught fire and sank in the East River, killing over 1,000 people, its older sister ship the Grand Republic — a twin of the doomed vessel, owned by the same company — kept operating along the waters of New York Harbor.

To many, it looked like the ghost of the Slocum.

The Grand Republic often ran in tandem with the Slocum, transporting passengers to the seaside amusements of the Rockaways.  During the month of June 1904, the Grand Republic was assigned to the Hudson River, while the Slocum ran the Long Island Sound.

An advertisement in the New York Evening World, June 10, 1904 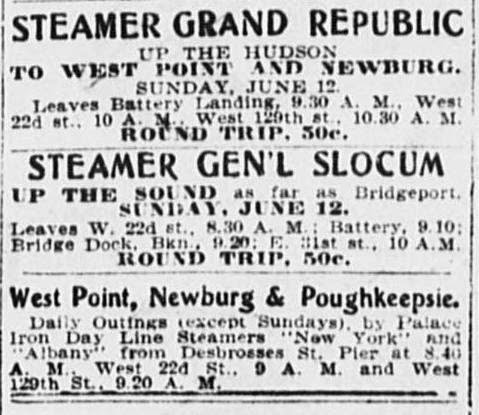 After the Slocum tragedy, steamboat inspectors were heavily scrutinized and excursion companies were accused of endangering lives for a fast dollar.

Rallying to the side of safety was, of all people, the venerated Daniel Sickles, former Congressman and Civil War officer.  (You may remember him from his early days back when he killed the son of Francis Scott Key.)

The retired politician had no tolerance for the bureaucrats he believed were responsible for the Slocum disaster.

“Scalp those moribund Federal officials who sit with their roll-top desks and draw their salaries for doing nothing while human life is allowed to be sacrificed by the hundreds,” he said. “Only yesterday, I am informed the Grand Republic was allowed to leave her wharf with more passengers than the law allows. Broadside these fellows and let every man and woman write President [Theodore] Roosevelt a letter demanding an investigation.” [source]

Sickles made good on his word, writing Roosevelt and lashing out at the steamer companies in no uncertain terms, the overcrowded General Republic his chief example of their continued malfeasance.

Below: A graphic on the Grand Republic in a book called American Steam Vessels. “Built in 1878” “This steamboat was the largest ever constructed for excursion purposes exclusively at the port of New York.” 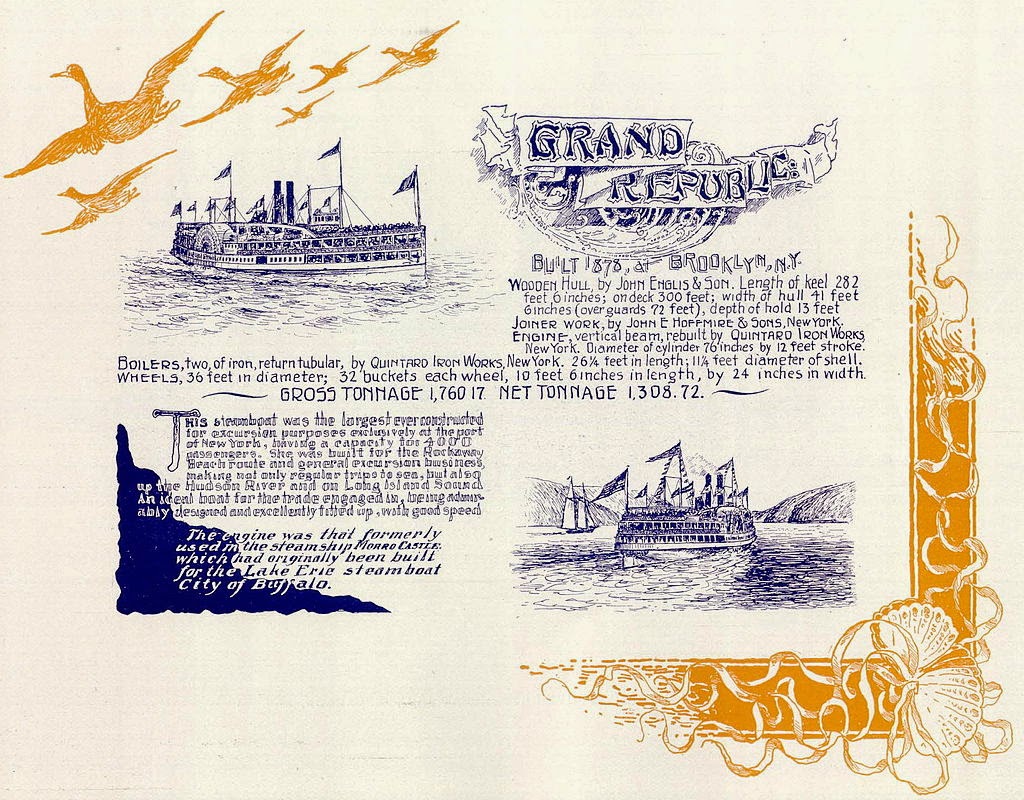 Still that did not take the Grand Republic off the waters. ‘THE GRAND REPUBLIC STILL RUNS,” declared the Tribune on July 4, 1904.

Below: A view of the Midland Beach pier, where excursion steamers would frequently dock. (NYPL) 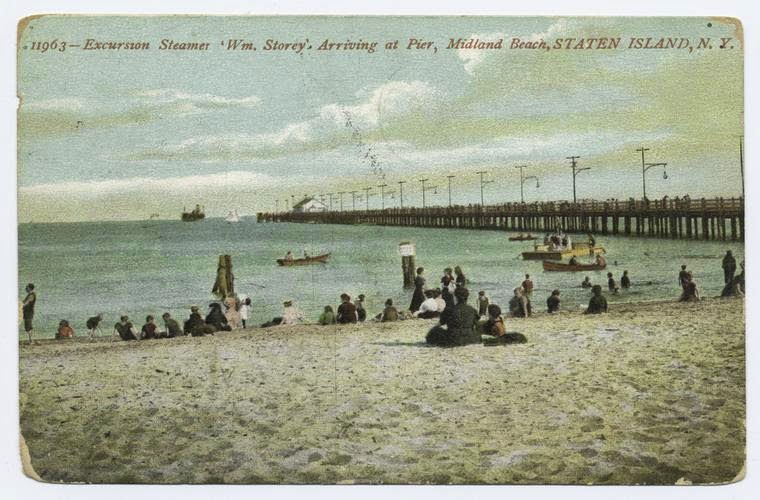 Four days later, the Grand Republic almost crashed into another steamer off the coast of Coney Island. Two weeks later, with 500 passengers aboard, it slammed into the Kismet steam yacht.  In August, the boat was revealed to have the same sort of rotten life preservers that had so doomed the Slocum.

Still that did not take the Grand Republic off the waters. “GRAND REPUBLIC DEFIES ORDERS,” declared the Evening World on August 3, 1904.

Below: The Grand Republic, illustration by Samuel Ward Stanton 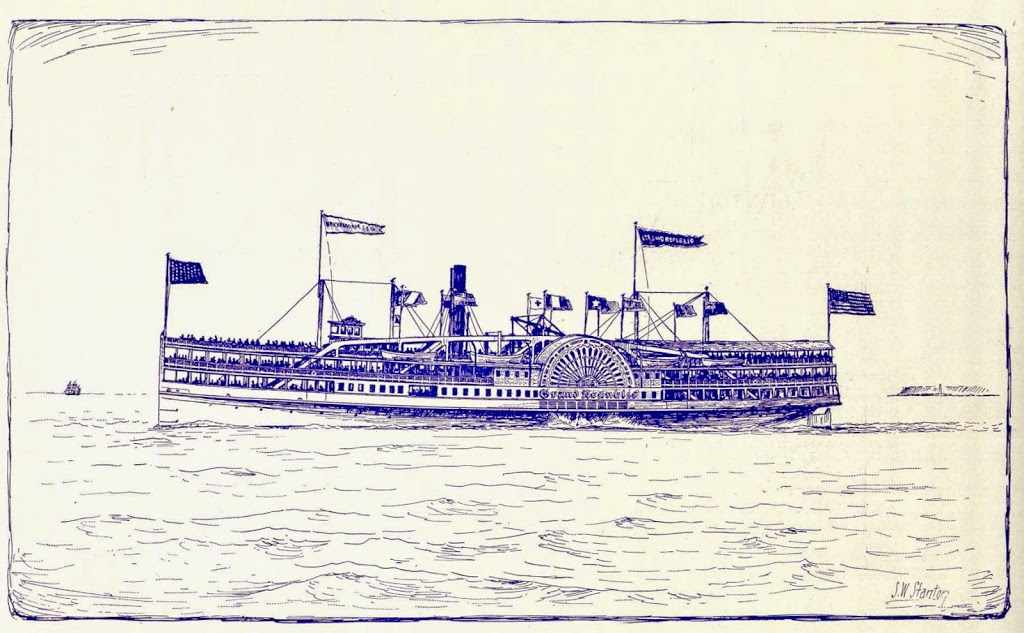 The steamboat owners argued with the New York inspectors in the press, neither looking very trustworthy.  Eventually the boat owners surrendered the Grand Republic to the government for inspection.

Believe it or not, even with hundreds of life preservers declared ‘rotten’ and promptly removed, the boat was eventually declared safe, although its capacity was greatly lowered — from 3,750 to 1,250 passengers, a major financial blow to the owners.

It led a quiet career for many years afterwards, although many feared the boat’s association with the doomed General Slocum and refused to ride it.  It resumed trips to the Rockaways and Coney Island, taking tens of thousands of people through New York Harbor for many, many years.  And it even returned to taking church groups on day excursions, similar to the journeys that the General Slocum had taken.

But the boat would continue to get into rather significant accidents.  In 1915, even the suggestion of fire during one voyage sent a thousand people scrambling for the life preservers, resulting in several injuries.  In a disturbing parallel with the Slocum, “[w]omen shrieked as they were knocked down by the mob that surged about the lifeboats.” [source]

On August 1, 1922, the Grand Republic smashed into another boat in the Hudson River, injuring over a dozen people.  Luckily the boat was filled with Boy Scouts, who calmed the panicked passengers. (Below, from the Evening World) 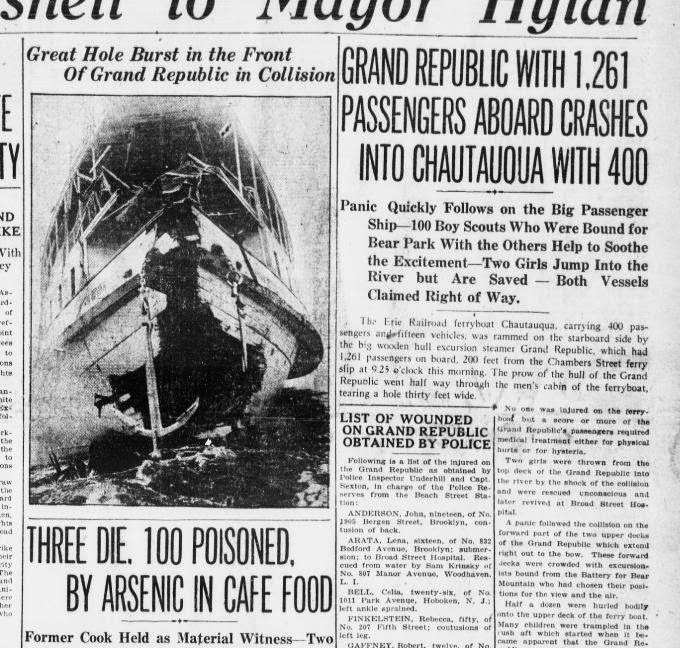 You might think this would spell the end for the old steamboat, but no!  It remained in the waters, continuing to transport passengers to upstate New York, one of the oldest vessels in service.

The Grand Republic, like its sister ship, was brought down by fire, although luckily without the terrible casualties. In 1924, while docked along 155th Street, a severe dockside blaze caught several boats on fire, including the Grand Republic.

The fire erupted late at night, and thirty men were sleeping aboard the boat at that time. Fortunately, this was the era of the automobiles; car horns from a nearby street awoke two seamen, who safely evacuated the crew.  The Grand Republic, however, was lost, eventually sinking into the Hudson River.

By the time of its demise, the boat seems to have shaken off much of its bad reputation.  Later that year, in a sort-of obituary to the excursion steamer industry, the New York Times declared, “[C]ertainly the Grand Republic was a grand success as an excursion boat.”

6 replies on “Troubled Waters: The story of the Grand Republic steamboat, the cursed sister ship of the General Slocum”

Great post! And so timely with the 110th Slocum anniversary this week.

I have been very fascinated by the General Slocum disaster since I read Ed O’Donnell’s book Ship Ablaze. The event plays a pivotal role in my novel about a German-American family in America from 1848 to the present.

One question I did have is about that wonderful piano piece that was played at the beginning of the podcast. Do you happen to know the name of the song and artist?

Believe it or not, that was some royalty-free music I picked up somewhere! It was beautiful, wasn’t it? I’ll check to see if the piece had an artist listed….

Interesting article. I recently discovered your blog and podcast and have had a great time catching up on all the back episodes.

Also, it is a weird coincidence that the newspaper clipping above has as its other leading story the arsenic poisoning, which I just read about in “The Poisoner’s Handbook” by Deborah Blum.

I just bought an excellent condition, high quality 5×7 glass negative at a flea market. It is WAY better than any images I’ve found on line. I dropped it off at a place for high quality scanning and should have it back in the next week or so.