PODCAST The tale of New York City’s biggest annual party from its inception on New Years Eve 1904 to the magnificent spectacle of the 21st century.

In this episode, we look back on the one day of the year that New Yorkers look forward. New Years Eve is the one night that millions of people around the world focus their attentions on New York City — or more specifically, on the wedge shaped building in Times Square wearing a bright, illuminated ball on its rooftop. 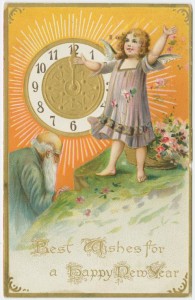 In the 19th century, the ringing-in of the New Year was celebrated with gatherings near Trinity Church and a pleasant New Years Day custom of visiting young women in their parlors. But when the New York Times decided to celebrate the opening of their new offices — in the plaza that would take the name Times Square — a new tradition was born.

Tens of millions have visited Times Square over the years, gazing up to watch the electric ball drop, a time-telling mechanism taken from the maritime tradition. The event has been affected by world events — from Prohibition to World War II — and changed by the introduction of radio and television broadcasts.

ALSO: What happened to the celebration which it reached the gritty 1970s and a Times Square with a surly reputation?

PLUS: A few tips for those of you heading to the New Years Eve celebration this year!

New Years Day celebrations have evolved since the days of New Amsterdam when visitations symbolized a ‘fresh start’ to the year.

A decorative cigar box from the 1890s, ringing in the new year with a winsome damsel and wholesome scenes of winter beckoning you to smoke a cigar.

The crowds outside Trinity Church on 1906 gathered to usher in the new year. The church was traditionally the place people gathered before the Times Square celebration took off. 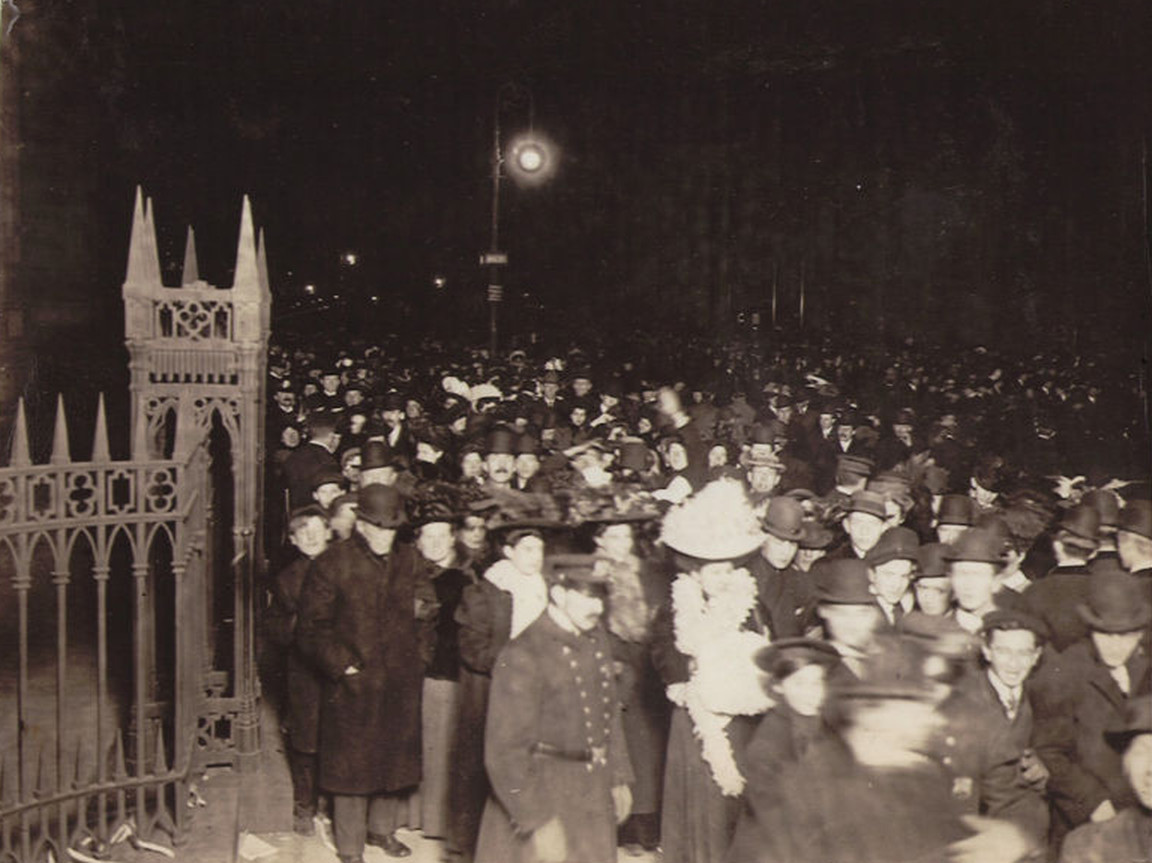 Fated to be the centerpiece of New Years Eve, One Times Square once wore some beautiful architecture until much of it was ripped off to accommodate a frenzy of electronic signs.

Times Square in 1905 for the very first New Years Eve celebration albeit one with fireworks, not a ball drop.

The party offerings at the Hotel Astor in Times Square in 1926.

The view of Times Square from the Empire State Building.

The throngs in 1940 with the Gone With The Wind marquee in the background (not to mention Tallulah Bankhead in the play The Little Foxes!) 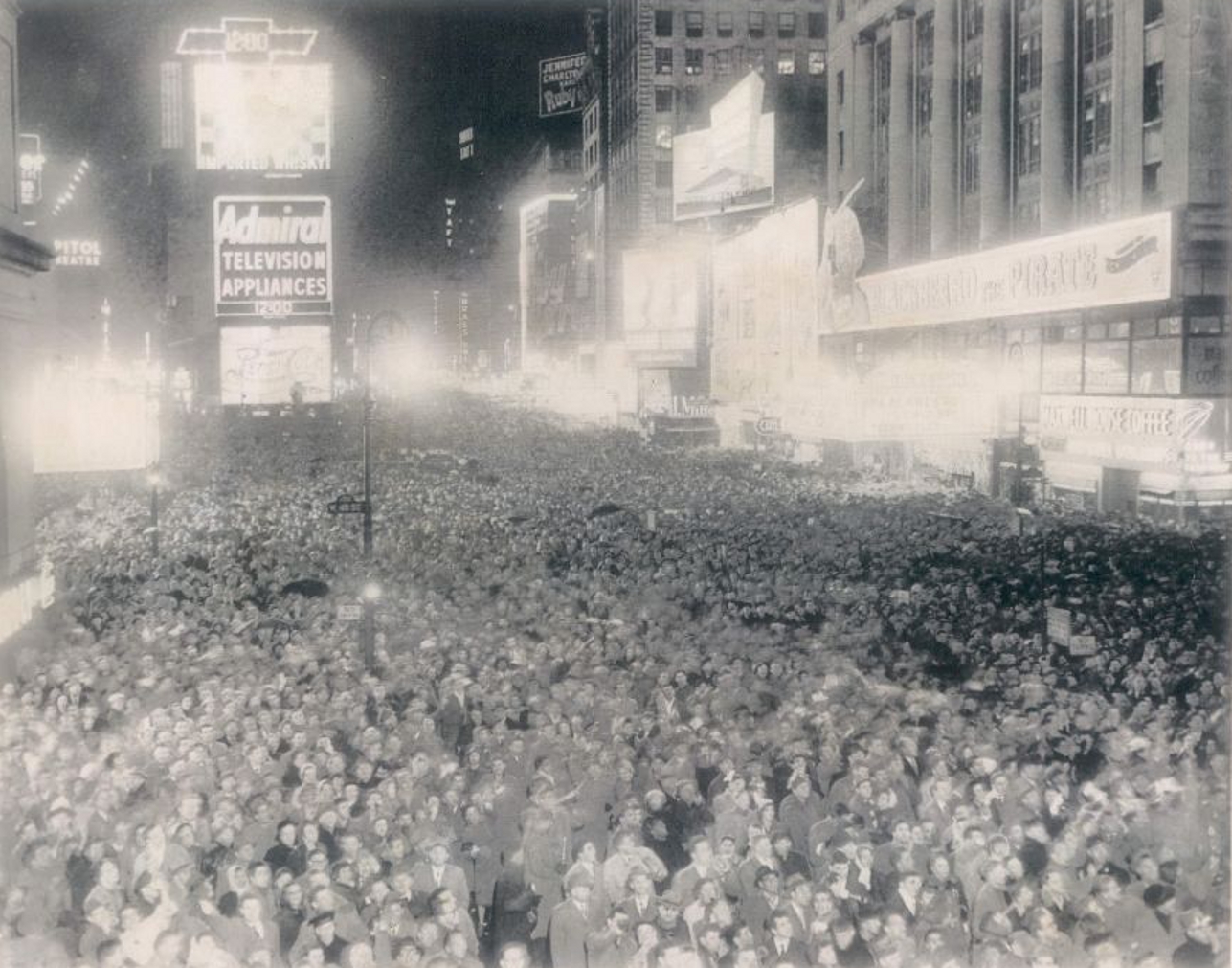 Celebrations were also held for a time in Central Park, like this festive group from 1969:

An electrician from the Artkraft Strauss Sign Corporation tests out the lighting effects that will greet the new year in 1992.

And here’s some videos of New Years Eve countdown past!

A clip from Dick Clark’s first appearance in Times Square. It cuts away to Three Dog Night in California!

The absolutely bonkers ball drop for the new millennium.

6 replies on “Midnight in Times Square: The history of New Year’s Eve in New York City”

Enjoy New Year’s Eve in Times Square in 1969 with The Zum Zum Girls. Published this year – The Zum Zum Girls takes you back to the late ’60s during the Vietnam War, women’s lib,, the sexual revolution, and Woodstock through the eyes of four close friends , Lori, Angela, Priscilla, and Marcia, living in New York City. Filled with historical events, The Zum Zum Girls with take you on a journey – the way things used to be and how much everything has changed, including Times Square. It’s a wonderful book and real sleeper.

I recently discovered your podcast on Stitcher. I was enjoying listening to the journey through time of New Years celebrations in New stork when suddenly I heard you describe an event I actually attended: the 1976 happening at Bethesda Fountain in Central Park. My father was heavily involved in the Off-Off Broadway movement in the Village. Mask maker and puppeteer Ralph Lee was a colleague (he’s best known for starting the Halloween Parade). Ralph’s work was often public and processional, involving monumental puppets. As you described, the piece involved a procession into the park, followed by a transition from the old year to the new involving an appearance from The Grim Reaper. At Bethesda Fountain there was a contemporary rock/funk band performing. The atmosphere was certainly celebratory, but not giddy. This was a downtown artsy, experimental theater crowd. There was a lot of pot smoking and some champaign. Remember, this was the 1970s, a few months before the so-called “summer of Sam.” Parks were dangerous after sundown, so there was a novelty to being in Central Park at midnight with a large group of people (around 100, I’m guessing). We took the subway back to Brooklyn. There was a celebratory spirit on the trains that night. People were passing bottles of booze down the benches. I’ve never experienced anything quite like it on New York since.

Speaking of Centeal Park, I returned to live in the city in the 1980s and found myself on the Upper East Side. We would make out way to the entrance to the park at 91st Street and walk up to the reservoir around 11:45pm. At midnight, there was a fireworks display overall the reservoir. People from the neighborhood brought bottles if champagne. Then, around 12:15, a run that I believe was sponsored by Tavern on The Green, would make its way to the East Side of the reservoir, at which point the participsnts would turn around and run back to the West Side. The “runners” we’re either dressed to the nines and very drunk, having come from the Tavern on the Green’s New Years party, or neighborhood folks dressed in ironic New Years costumes. It was a lot of fun. Someone always set up a table with those little paper cups they always hand out to the runners I the marathon. Only, they were filled with champaign.