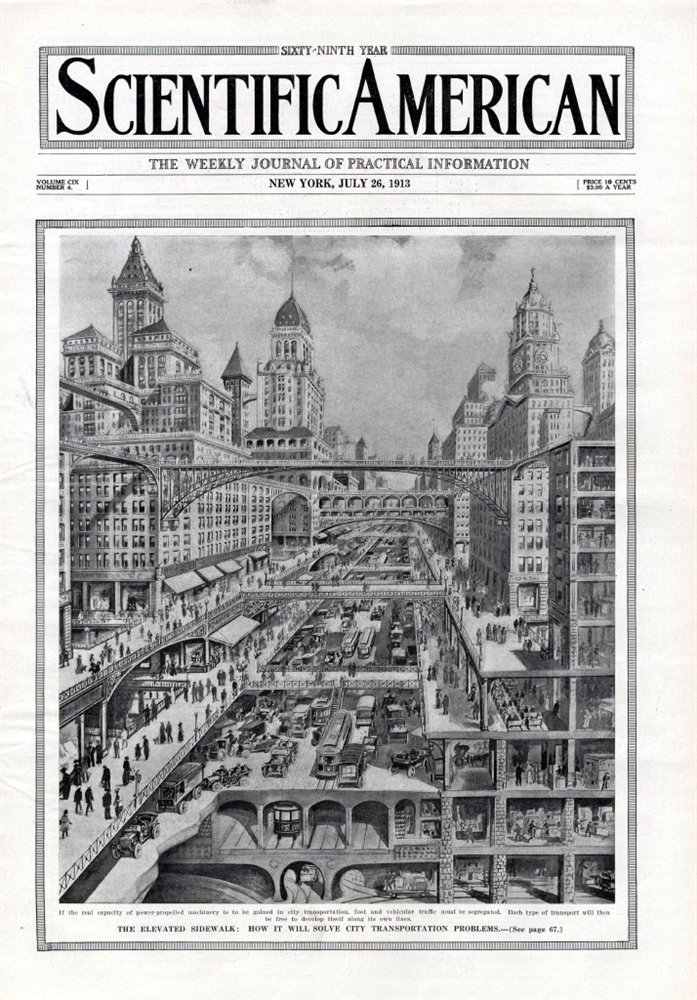 Imagine a city where the High Line isn’t just a novel park, but the primary form of urban conveyance.

In 1913, with the proliferation of the automobile, it seemed humans were being crowded out at ground level. Â People were beginning to think of themselves as removed from the street. Â Daredevils were experimenting with flight, and small, single-man crafts began appearing over the skies of Manhattan. Â The world’s tallest building, theÂ Woolworth Building,Â had been completed a few months before. Â Perhaps the streets themselves could elevate, granting pedestrians a space of their own?

Scientific American suggested the possibilities of a city of elevated layers in its July 26, 1913 issue. “The Elevated Sidewalk: How It Will Solve City Transportation Problems,” written by engineer and science writer Henry Harrison Suplee, posits that humans and automobiles are simply incompatible and opposing engines upon ground level, and that one will have to give way to the other.

“One of the greatest impediments to city transport today is the continuance of the obsolete method of attempting to conduct foot and vehicular traffic upon the same highways.”

Below: Cars and people seem to co-exist peacefully on Fifth Avenue (pictured here in 1913). But, darn it, automobiles are meant to go fast!Â

After all, cars are meant to go fast. Â “In nearly every large city today there appears a tendency to enforce traffic regulations intended to permit the most conflicting elements to be operated together and the result is naturally the impeding of the very traffic which it is desired to help.”

By keeping people and automobiles on the same plane, one risks lives, sure, but more importantly, it slows progress by keeping the potential of auto motion on a short leash.

Suplee’s solution: “Take the foot passengers off the surface of the street entirely, and leave the highways solely for vehicles!”

Below: Evidence of the incompatibility of foot and automobile was being amply displayed all over New York City, most notably on “Death Avenue,” the trecherous tangle of roads on Manhattan’s West Side. Eventually the elevated freight railroad today known as the High Line was built to relieve this issue. 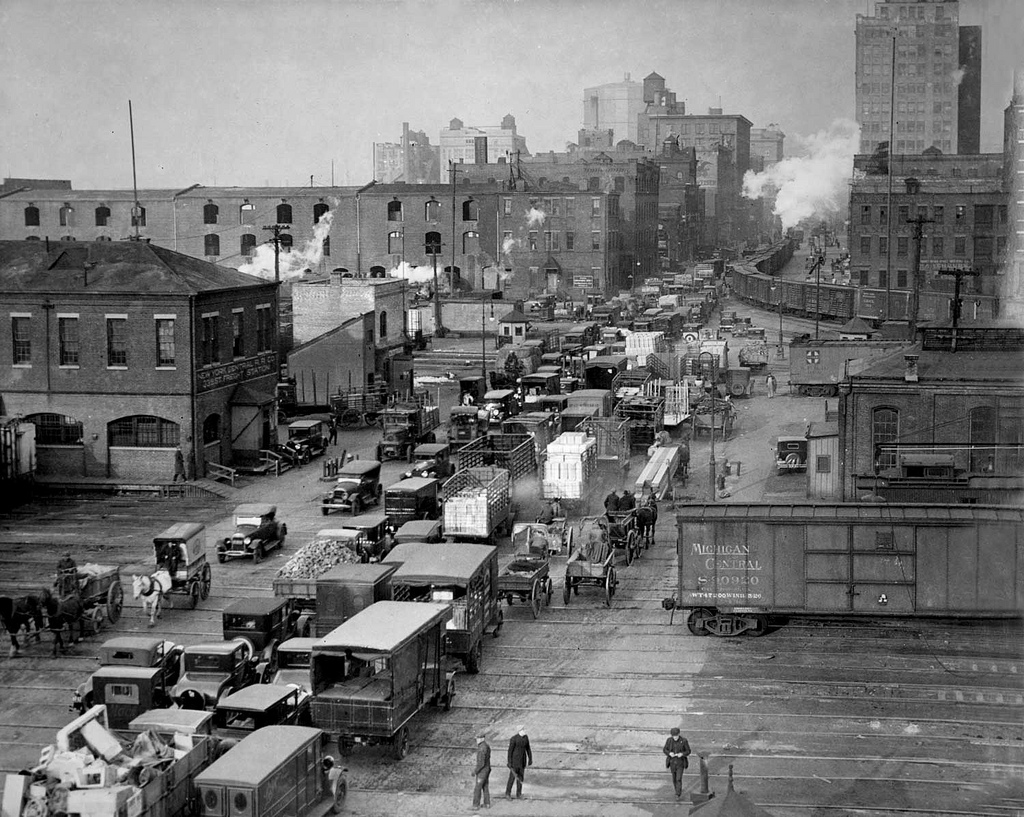 New York had many precedents for this. Â The great passages over the East River (the Brooklyn, the Williamsburg and Manhattan bridges) had all been completed with elevated pathways for pedestrians, situated over or alongside those paths for vehicular traffic. Â Trains were either elevated overhead along the avenues, or buried underneath the ground.

Suplee doesn’t imagine a world were pedestrians become smarter, or any type of place with sophisticated traffic lights or crosswalks. Â Instead, elevated sidewalks would hover over the major thoroughfares; “[S]uch sidewalks might be built on Broadway from the Battery to Union Square, there sloping down to the surface level until further extensions were required,” he writes.

In a city of skyscrapers, bridges could be constructed several stories above the street. Â Store fronts would appear on the second or third floors, while the ground floor would be exclusively used for delivery and store. Â Life would essentially reside many feet above the ground.

Bicycles figure nowhere in his model, but he does carve out one exception to his pedestrian only level. Â “The power vehicles should be kept absolutely to the surface, and there given unrestricted facilities for speed, weight, and numbers; and the foot levels maintained for absolute freedom for pedestrians, with the possible exception of carriages for small children.”

As commenter Boris mentions below, while New York City never adhered to this suggestion, other cities certain did — to a certain extent.

(A shorter version of this blog post originally ran June 2013)

3 replies on “A city of bridges: One century ago, Scientific American predicted a future of elevated sidewalks”

It’s remarkable how much this resembles the creative approach to sea-level rise proposed by earth scientist Klaus Jacob and others – in which the ground becomes more of an open floodable zone with Highline-style walkways connecting towers. He described this vision during a panel discussion I led at NYAS.org earlier this year: http://www.youtube.com/watch?v=VNGC3lJJvNE

Chicago did exactly this on Michigan avenue. It works pretty well, except cars get to operate on all levels.

The Comic strip “Little Nemo” did the overheads with brio!