This month America celebrates the 100th anniversary of the National Park Service, the organization which protects the great natural and historical treasures of the United States. There are a number of NPS locations in the fiveÂ borough areas. Throughout the next few weeks, we will focus on a few of our favorites. Â  For more information, you can visitÂ National Parks CentennialÂ for a complete list of parks and monuments throughout the country. Â For more blog posts in this series,Â click here. 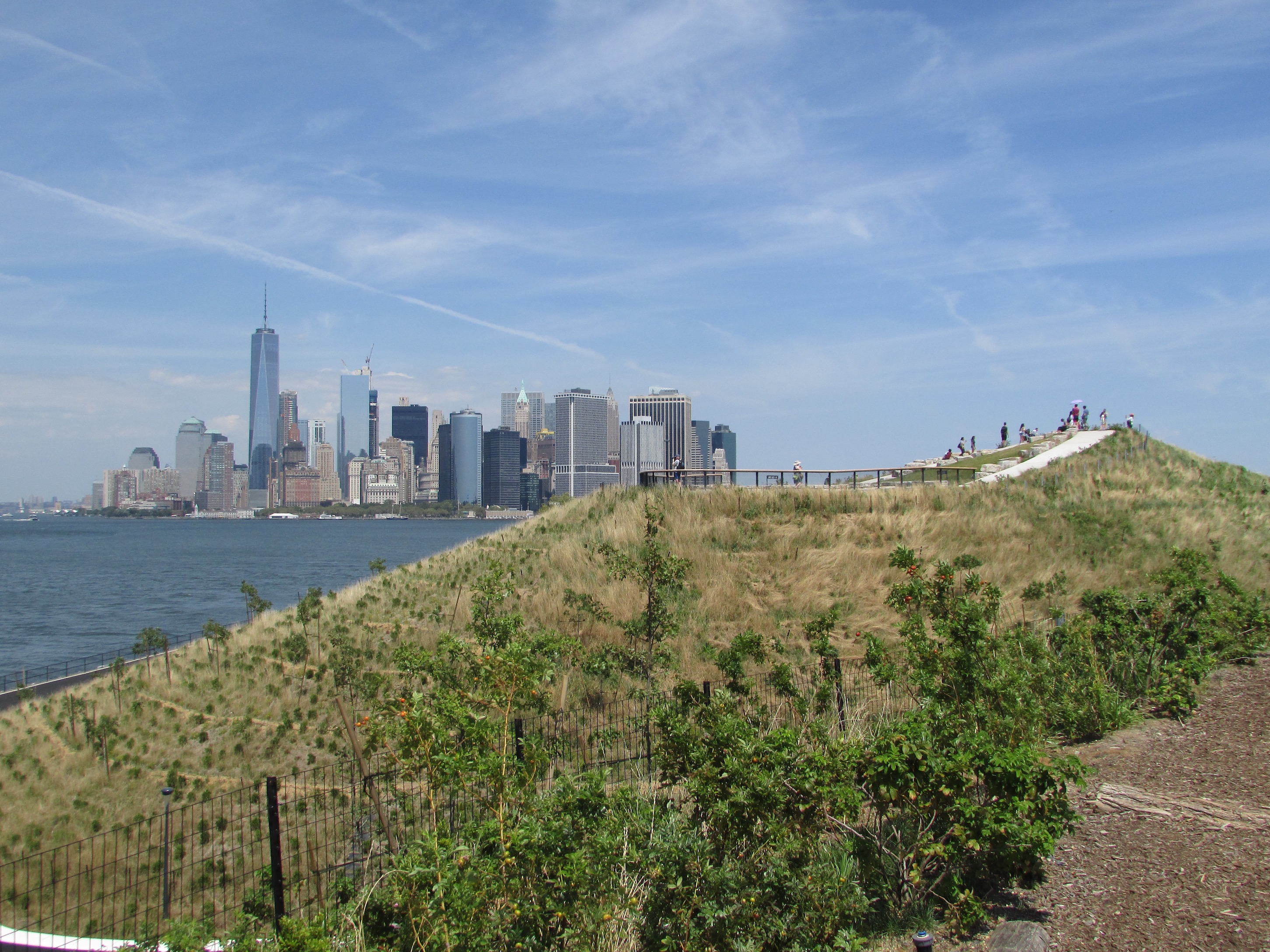 The cone-like southern portion, a landfill addition once populated with former U.S. Coast Guard buildings and an airstrip, has now sprouted fanciful hills of various shapes and sizes, providing extremely unique views of the surrounding harbor. The Hills feel both ancient and new, barren of trees but shaped like ancient landmasses which have conveniently emerged from the water, just in time for summer. Palm trees would not feel out of place. 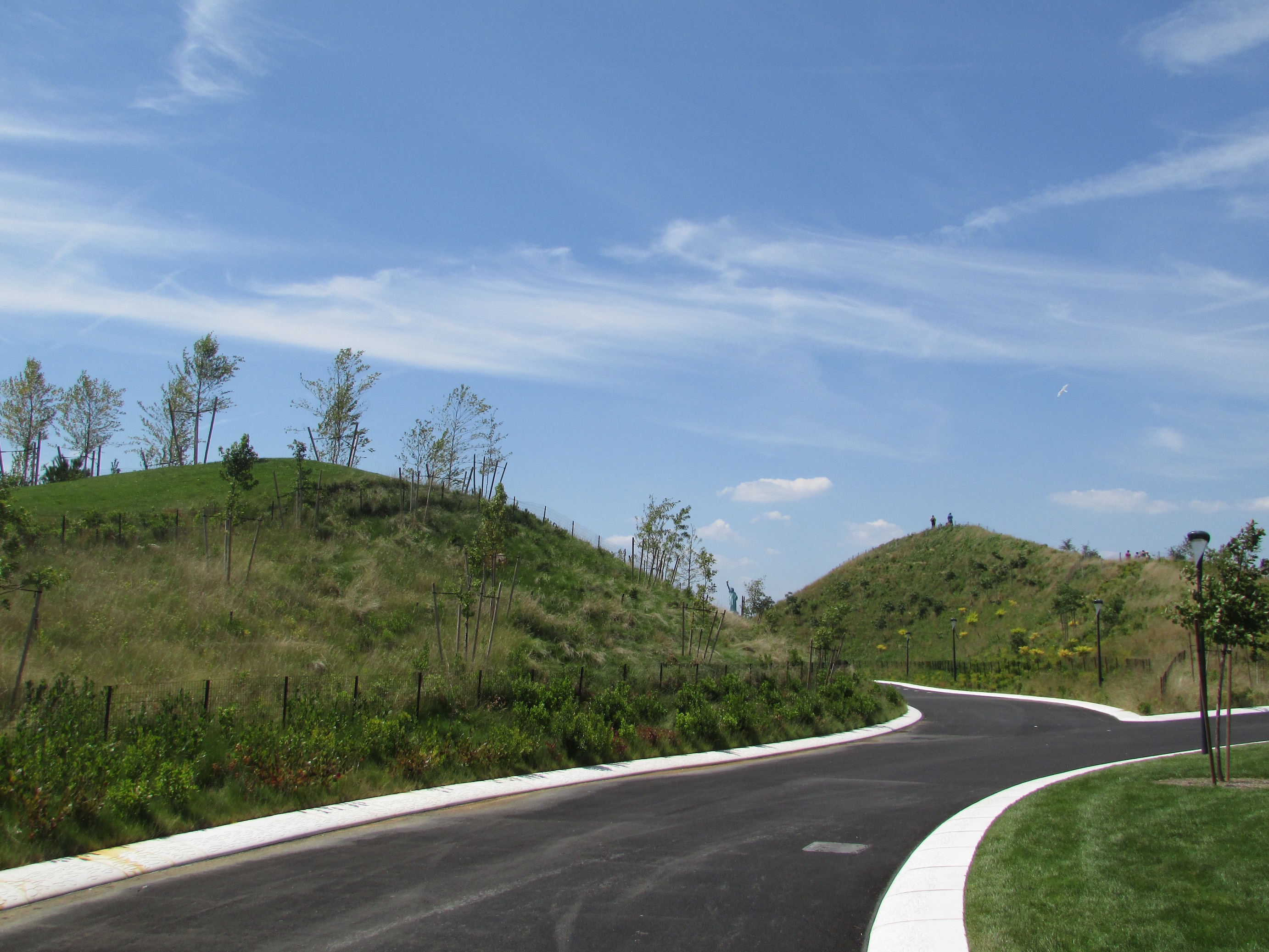 Graciously carved paths lead from the historic side of the island to theseÂ new topographical features, and along the way, you’ll be tempted to stop in the hammock grove or perhaps the urban farm with its tiny population of tiny goats.

The Hills are the latest addition to one of New York’s most secretive historical corners, a new diversion for an island blessed with so many unusual stories. 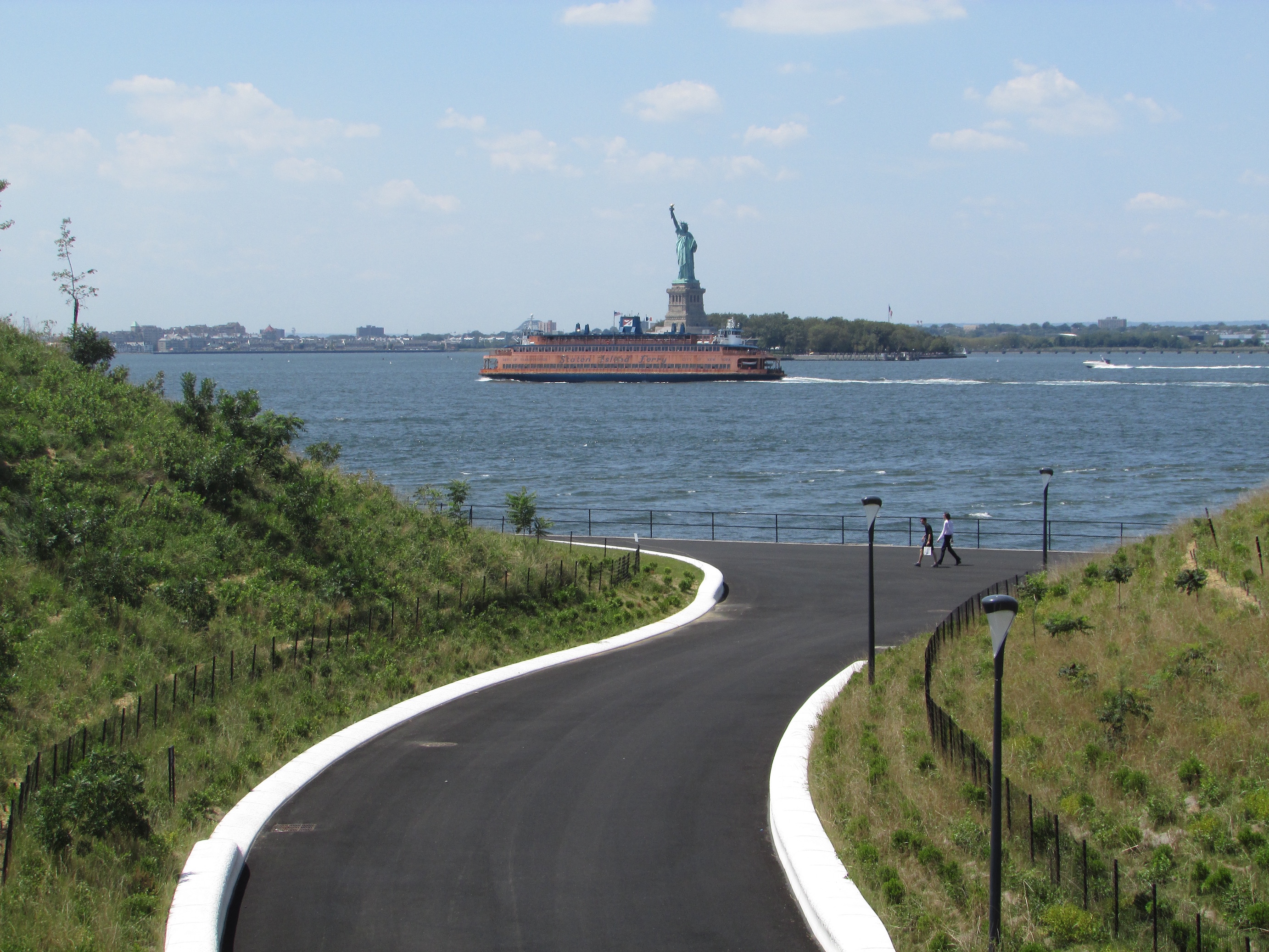 Of the three small islands that sit in New York Harbor between Staten Island and Manhattan, two of them (Ellis Island and Liberty Island) have been embedded into the American consciousness as icons of freedom and opportunity. The third, Governors Island, is often overlooked by both visitors and residents.

However, for much of the cityâ€™s history, this ice-cream-cone shaped island, separated from Brooklyn by the richly named Buttermilk Channel, has been critically important to the nationâ€™s defense. Fortunately, its most treasured historical landmarks are still around more than 200 years after they were constructed.

In 1624, when the Dutch brought the first settlers to the New World to establish what would become New Netherland, they deposited eight men on this small island, which they named Noten (Nut) Island. It was a convenient spot, just a short rowing distance from the future settlements of New Amsterdam and Breukelen. But it would be the British who would give it the name GovernorsÂ Island after taking charge of the colony in 1664, as the royal governors of the New York colony would indeed live here.

Governors Island in 1824, the harbor’s military sentry even in times of peace.

The island would be less hospitable to the British a century later, when in 1776 the Continental Army constructed earthen forts here to ward off British war vessels during the early years of the Revolutionary War. While its guns did scare off two British ships on July 12, 1776, the British succeeded in driving the Continental Army out of New York during the Battle of Long Island. They would occupy Governors Islandâ€”and all of New Yorkâ€”throughout the conflict.

In 1783, at the end of the war, the new Americans ushered the British out of the harbor with gusto. But fears of their return continued for decades afterward, presenting the young government
with the alarming thought of New York being recaptured.

A view of Castle Williams from the interior of the island. 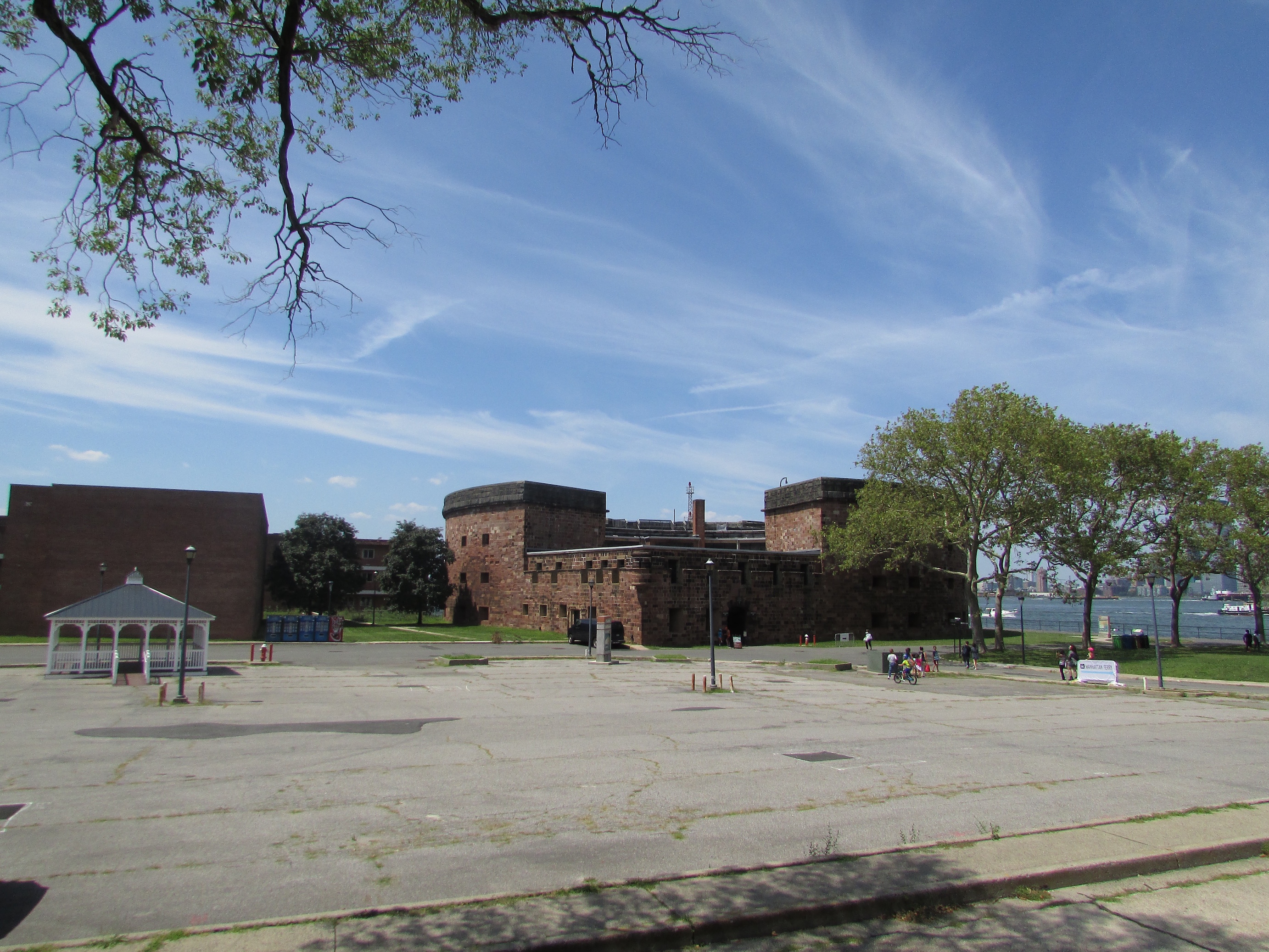 And so, with tensions mounting in the run-up to the War of 1812, two very different fortresses were constructed here. Fort Jay, sitting on the site of the original Revolutionary War defense, was designed like a five-pointed star fort surrounded by a dry moat.

Castle Williams, sitting on the shoreline, was given an almost completely circular shape, punctured with openings for dozens of cannons. Both fortifications have survived and can be visited today, most likely because neither ever saw an actual battle.

Aware of the islandâ€™s strategic location for defending the nationâ€™s most important city and harbor, the U.S. Army moved out to Governors Island in the 1830s, and would remain stationed there until 1965.

The shady lawn separating the officers homes from the administrative buildings. 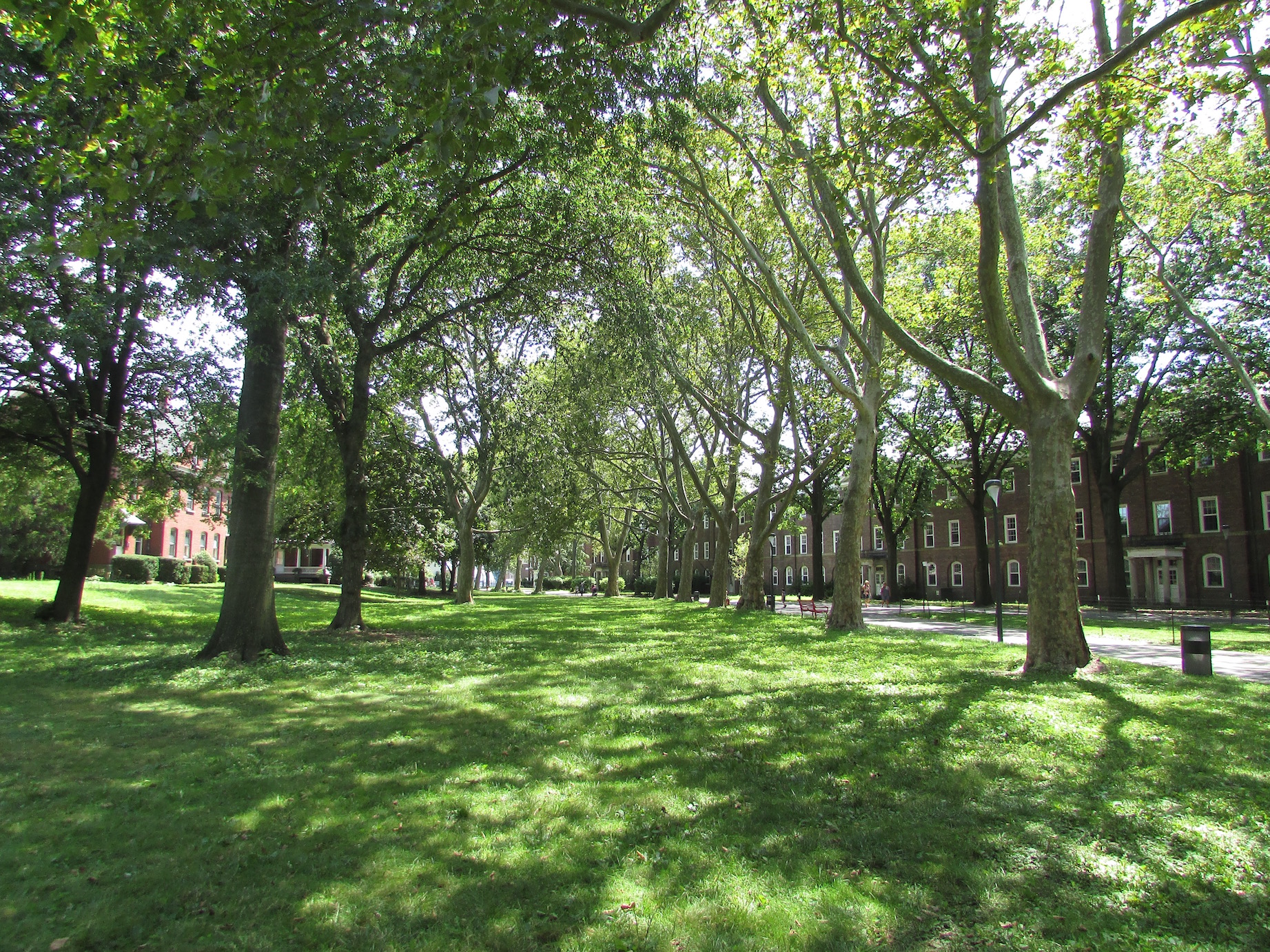 During the Civil War, the forts were reworked into holding cells for Confederate soldiers, Union deserters, and criminals. Captured Confederate officers were held in relatively posh quarters at Fort JayÂ while regular soldiers were thrown into the much less comfortable prison at Castle Williams.

As Lower Manhattan developed skyward in the late nineteenth century, the close proximity of two military forts to the nationâ€™s largest city was a bit, well, surreal. Meanwhile a sort of small-town life developed here on the island, and by the 1880s, rows of elegant Victorian brick houses were constructed for Army officers and their families. A genteel life among the cannons!

In the first years of the twentieth century, the island more than doubled in size â€”the â€œconeâ€ was added to the ice-cream scoopâ€”with landfill mostly taken from excavations of New Yorkâ€™s subway system, which opened in 1904.

Wright’s historic flight from Governors Island over the harbor to Manhattan.

This new flat expanse, located so close to lower Manhattan, was an ideal spot for the cityâ€™s first airstrip. In 1909 Wilbur Wright lifted off here in his flying machine, coasting around the Statue of Liberty and later up the West Side as far as Grantâ€™s Tomb. It seemed like such a logical base for air transport that in the 1930s Mayor Fiorello La Guardia tried to build the cityâ€™s first permanent airport there.

The gigantic Building 400 (later renamed Liggett Hall) was the largest military building in the world when it was completed in 1930. The structure separates the original section of the island from its twentieth-century addition and lends the island something of a college campus feel. You can easily imagine how charming it must have been in the 1940sâ€”thereâ€™s even a playhouse where Irving Berlin debuted a revue in 1942 called This Is the Army. Of course, charming revues couldnâ€™t mask a more harrowing reality: The islandâ€™s residents were fully engaged in fighting World War II.

The ‘new’ section of Governors Island does feature a few artifacts from the past. 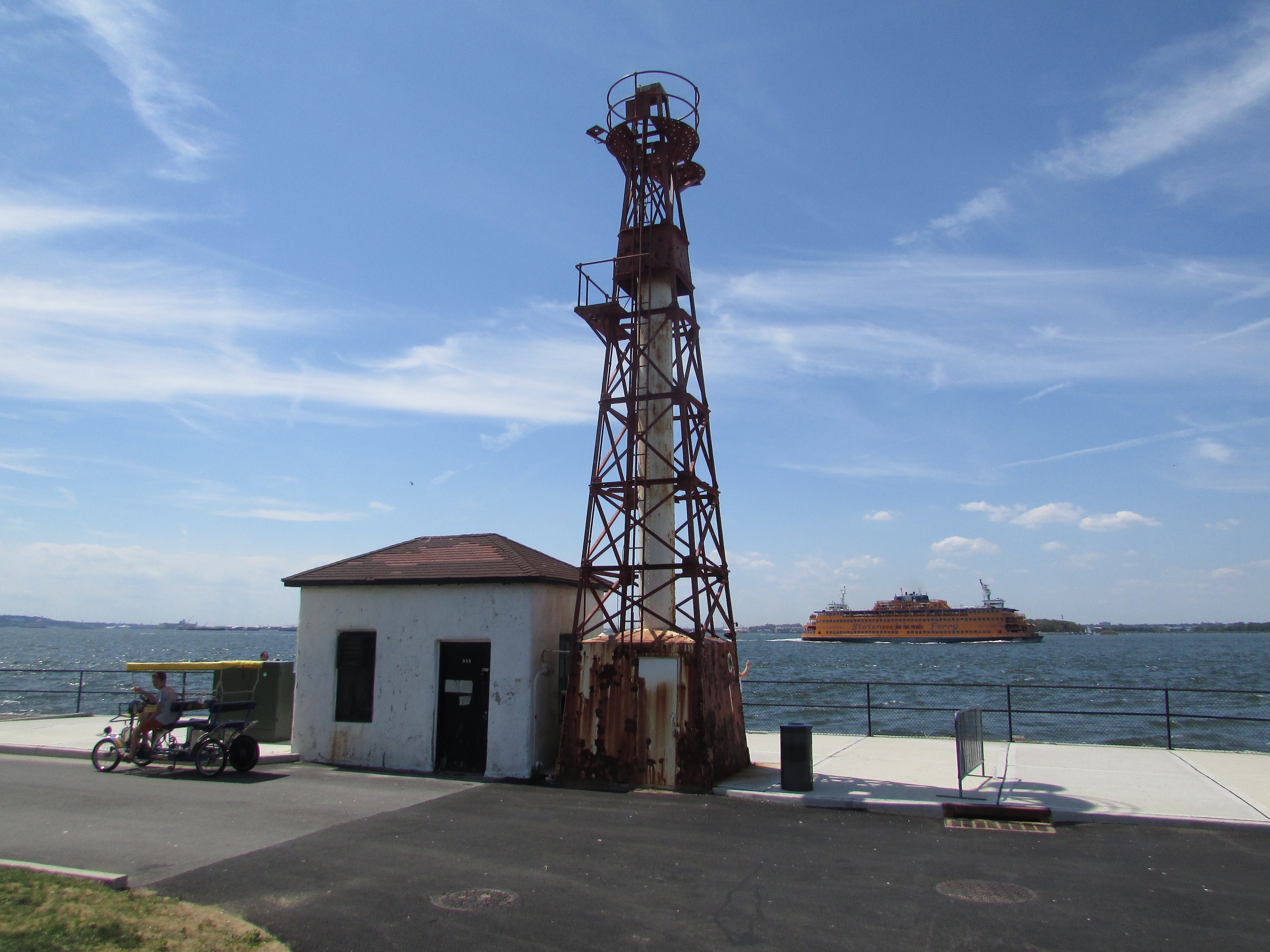 In 1966, the island changed administrative hands, as the Coast Guard moved in and increased the population by nearly 4,000 people. The leafy lanes became ever more bucolic, as small-town amenities were added, including a bowling alley and a supermarket. Â By 1996, the Coast Guard had departed for roomier shores, leaving the island desolate.

Governors Island had been the property of the federal government since the early nineteenth century. When in 2008 the island was sold to New York City, many wondered what could possibly become of the now-abandoned settlement. That same year the island opened its shores on weekends to visitorsâ€”they were free to explore, often with great astonishment, some of the empty structures, as if they were wandering ancient ruins.

Today, after more than a decade of thoughtful preservation and promotion, thousands of New Yorkers enjoy the island during the summer, visiting the officersâ€™ homes (now home to arts and music groups), newly landscaped parks (in the landfilled â€œconeâ€ section), and weekend arts and food festivals.

And after all this time, Fort Jay and Castle Williams, now maintained by the National Park Service, still stand watch over the harbor. Oh, the things theyâ€™ve seen.

LISTEN TO OUR PODCAST!Â We have an entire show on the history of Governors Island. It’s Episode #185. You can find it on iTunes or download it fromÂ here.