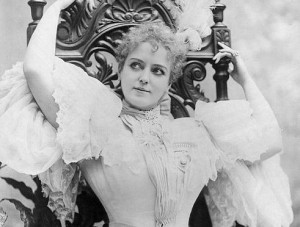 Had there been a paparazzi in the 1880s, the woman they would have hounded the most would be New York stage singer and actress Lillian Russell. Like a Scarlett, she was always hanging on the arm of a famous, powerful man. Like an Angelina, she did dramatic things in her personal life that often upstaged her work. And like a Britney, she was occasionally caught doing things most unbecoming for a lady.

Celebrity fame in those days derived primary from legend and word of mouth; most of the people who idolized Russell had never seen her, in anything. As P.T. Barnum aptly demonstrated with Jenny Lind in the early 1850s, nobody actually needed to hear you sing to become a famous singer; you just had to be desired as one.

Russell (as Helen Louise Leonard) came to New York from Iowa in 1878 to become a opera star, managing to train under no less than Leopold Damrosch, whose son Walter was intimately involved in the creation of Carnegie Hall. The next year, she changed her name to Lillian Russell. 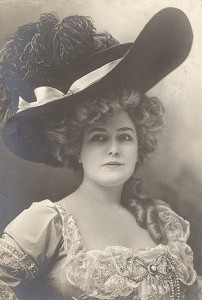 She made her name thanks to Tony Pastor, a vaudeville showman who presented a wide range of acts at his Union Square music hall. Her sweet singing voice and good looks made her perfect for the comic opera circuit, and she quickly became the toast of New York theatre. She eventually toured Europe, hopped from opera company to opera company, and became the first voice in travel over long-distance phone wire in 1890, thanks to admirer Alexander Graham Bell. (She sang the ‘Sabre Song’ to listeners on the other line in Boston and in D.C.)

But it was her penchant for glitz, and roster of suitors that made her a legend among celebrity seekers. She would breeze through four different tempestuous marriages with an actor, a politician, a composer and a newspapermen, but she would be most famous for the one man she didn’t marry — ‘Diamond’ Jim Brady.

Brady was a legend of the Gilded Age, a wealthy businessman who embodied indulgence. Enamored of wearing jewels (thus the nickname), Brady painted the town with his money, a frequent and well-known guest at all the hottest restaurants in town, especially Delmonico’s and later Luchow’s.

He was known for his sizable appetite, a usual evening meal at Charles Rector’s restaurant involving “two whole ducks, six or seven lobsters, a sirloin steak, two servings of terrapin and a variety of vegetables.” And, in the process, growing terribly, unbelievably fat.

He began a public flirtation with Russell that lasted throughout the 1880s and 1890s(throughout her various marriages!) by wooing her with jewels and fancy meals. They made quite a pair. Two celebrities in their thirties, their rubies and diamonds twinkling under gas light in the most exclusive dining room in the world. Oscar Tschirky, later to become the leading chef at the Waldorf-Astoria, got a job at Delmonico’s in his early years just to get a closer glimpse of Russell.

He would see quite a lot of Russell’s eating habits, keeping up with Brady as the pair shucked down oysters and drank champagne, her gluttonous abandon leaving little of her glamorous image intact. Like any actress today, her weight was closely observed, as during her years with her extravagant paramour, she blossomed to 160 pounds.

It seems clear that Brady was in love with Russell, and that Russell was in love with Brady’s attentions. Their public affair crept into the new century as Russell became the defining voice of American operetta. She went on to marry newspaper publisher and later U.S. ambassador Alexander Pollock Moore, and even toured Europe in her later years on behalf of president Warren G Harding. She died in 1922.

Diamond Jim (below) had died five years previous, having never married, with Russell still presumably in his heart, and god knows how many pounds of oysters in his gut. 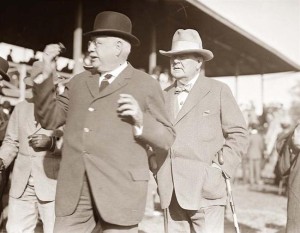 6 replies on “Jimian? The strange affair of Lillian and Diamond Jim”

I think that’s a picture of President William H. Taft you have there, not Diamond Jim Brady.

D’oh! I changed the pic. Sorry!

Hello! I can’t resist telling my story…I Am Lillian Russell reincarnated into a nice American Lady…not famous but well-loved by many! I discovered my former Life as Lillian and was elated to know that my Essence has come full circle and CONTINUED !! And I’m still Alive and “full of It!” as I obviously ever was. I seems that my Persona hasn’t changed much from last time…I look just like Lillian today and recognize my own eyes and physical attributed in each of her pictures. I still love to eat… and I love BLING and music and fancy clothes. I’ve been married four times as well, and Diamond Jim lives today as Himself made over again…fat and rich and horny as ever!! No one needs to know my name or whereabouts today….I’m, just a regular person who loves Life..in ALL It’s Aspects and Forms! Thrilled to know that I Am She and She is Me…what FUN! (Just thought someone might be interested in my happy little story!)

Believe it or not! Everybody gets reincarnated…about on the average of once or twice a century all down through history! You’ve been Somewhere, Doing Something…since Creation!!! Duh!!!!!!!!!! May my words here open up your Soul’s memory banks!