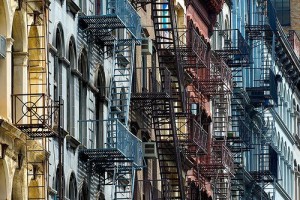 Some New York neighborhoods are simply named for their location on a map (East Village, Midtown). Others are given prefabricated real-estate designations (SoHo, DUMBO). But a few retain names that link them intimately with their pasts. Other entries in this series can be found here.

For all the New York City neighborhoods with wonderful old names hearkening back to Lenape, Dutch and British settlers, we have a small number crafted by other, more venerable tribes — real estate brokers and community organizers. Dumbo is not a city in the Netherlands; NoLiTa is not Lenape for ‘neighborhood’. And at least one –TriBeCa, that fashionable neighborhood northwest of City Hall — is made of comprised of a complex portmanteau that isn’t even technically accurate.

The area bounded on the north by Canal, south by Vesey Street, east by Broadway and west by the Hudson River is calm and quirky compared to other neighborhoods, owing to its shape, sculpted by a cross work of diagonal streets braced against the grid-like blocks between Church and Broadway. While the Lower West Side, as it was earlier known, began as a residential district in the late 18th century, its proximity to the docks and to the Hudson River Railroad’s St. John’s Park Depot transformed the neighborhood into a center of industry, primarily textiles by the 1850s.

Like the Meatpacking District further north, the western edge of the area also became a grocery center for New Yorkers, with fresh produce, dairy and meat. The streets of Washington Market, as it was known then, were clogged with buyers and sellers with vendors even set up along the Hudson River docks. A chaotic mess to be sure, to contrast with many of the gorgeous Italianate and Romanesque Revival buildings built by wealthy companies to house their offices and factories.

Below: You can easily find remnants of TriBeCa’s ‘material’ past 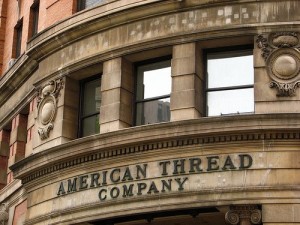 Flash forward to the 1960s. The factories long abandoned and the western warehouses cleared away to construct the West Side Highway, the large now-empty spaces attracted artists, musicians and “bohemians”, slowly returning the neighborhood to its original residential leanings. Similar, in fact, to the phenomenon of SoHo just north, also a locus for artists, whose tenacious effort to turn industrial space residential led to the creation of its made-up name (SOuth of HOuston) and historical landmark designation in 1973.

The residents of Washington Market followed suit. Or rather, those centered around an actual triangular block — the one with Canal to its north, Lispenard to its south and Church to its west. (It narrows pointing to Broadway on its eastern edge.) They formed a block association called the Triangle Below Canal to rally behind a similar designation for their area. Although they too are technically south of Houston — and Washington Market has a cleaner, historical ring to it — the organization’s name was truncated, and TriBeCa was soon born.

Although TriBeCa represents the entire area, in fact the neighborhood (outside of a few individual blocks) is not actually triangular at all. But as the true sign of the neighborhood’s drastic transformation, the area’s unofficial king is an Oscar-winning celebrity — Robert De Niro. The actor, who moved here in the ’90s, brought two restaurants and a film festival here, which allowed other celebrities to follow suit.

You can find more indepth information on the history of TriBeCa at its official website.

Below: Where once crowds of produce cellars clogged the streets, now filmgoers enjoy cocktails and watch film premieres 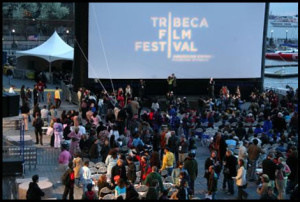