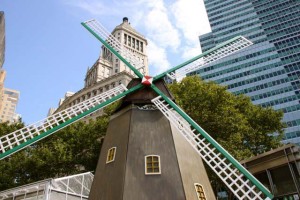 (Photo courtesy of Only In Holland)

In 2009, New York went Dutch. One hundred years ago, the city threw an elaborate party, the self-important, historically aware (often inaccurate) and undeniably prideful Hudson-Fulton Celebration, honoring the 300th anniversary of Henry Hudson sailing into New York harbor and Robert Fulton’s invention of the steamship. Although we didn’t go all out for the 400th anniversary of Hudson’s discovery this year — we’ve advanced from the days of cheesy historical floats — the occasion brought the early days of New York City history yearlong recognition.

Replicas of Henry Hudson’s Half Moon sailed the Hudson. New York tipped its hat to its precursor New Amderdam with NY400, a celebration that had Dutch royalty visiting a replica of an old New Amsterdam village and unveiling a permanent plaza called New Amsterdam Plein.

Museums jumped aboard with Hudson and the royals, with exhibits ranging from maps of the island’s original shoreline to the display of Manhattan’s official ‘birth certificate’. The Museum of the City of New York’s Amsterdam/New Amsterdam: The Worlds of Henry Hudson was probably the best primer for the occasion.

Of course, it wasn’t just Dutchophiles in an anniversary state of mind this year. A few New York bridges (like the Manhattan and the Queensboro) coincidentally hit significant anniversaries; the Grand Concourse turned 100 years old with a celebration at the Bronx Museum and a new book. 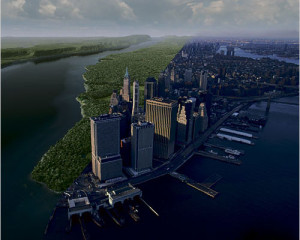 Some ventured even further back. Eric Sanderson unveiled the Mannahatta Project, easily the most exciting project for New York history lovers, taking a hearty stab at remapping the original ecology of Manhattan island, block by block. The website is hours of geeky enjoyment. I don’t really have any particular award to give, but if I did, Sanderson would be New York City history’s Man of the Year.

The event of the year, to me personally, was the June opening of the High Line, a raised park made from a re-purposed stretch of abandoned elevated train tracks. Those tracks have always held a great deal of mystery for me, so I was sure I was going to cringe at the results. The Meatpacking District had already been turned into luxury retailers; what horrors awaited these strange, unique structures along the west side? But the end result respects its initial allure while creating a quiet, pedestrian friendly destination. You can balk at some of the design choices, but the project as a whole is a beautiful addition to life in the city.

Some New York advertising icons returned (the Long Island City Pepsi Cola sign), others disappeared forever (the pre-9/11 DKNY ad on Houston). A few treasures thought lost rose from the silt, like the old bell from Dreamland park in Coney Island. My favorite archaeological city find has to be that spooky tombstone found in Washington Square, the marker of one James Jackson who died in 1799. Almost 50 years after Jackson’s death, someone would take one of the first photographs of New York — an early daguerreotype of the Upper West Side (see below) — which would then sell at auction at Sotheby’s in 2009 for $62,500. 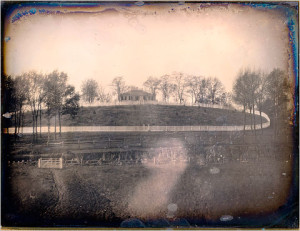 A few buildings officially became New York landmarks this year, including the La Mama Experimental Theatre Club building in the East Village and The Paramount Hotel in Midtown, and the neighborhoods of Prospect Heights and Perry Avenue became official historical districts.
Politicians made history, most of it questionable. As New York state politicians from the city prove they’re every bit as ludicrous as their 19th century Tammany Hall forebears, Michael Bloomberg capitalized on the change to term limits and was re-elected as mayor. At the completion of his third term, he will be one of New York’s longest serving mayors and the city’s fourth third term mayor in the past 100 years (LaGuardia, Lindsay and Koch also share this distinction.)
The musical which created The Public Theater, Hair, successfully turned a 2008 stint in Central Park into a viable Broadway smash and the Tony for Best Musical Revival. Both the Yankees and the Mets left their past behind with new stadiums this year; only the Yankees christened their new field with a World Series victory, paralleling the team who first moved into the original Yankee stadium.
British epic novelist Edward Rutherfurd released his much-anticipated fictional tribute to city history, New York: The Novel, which I am at this very moment making my way through. But if I had to name a New York book of the year, two very good histories (Sanderson’s companion to his Mannahatta project and Anthony Flint’s zesty document of the Robert Moses/Jane Jacobs battle, Wrestling With Moses) would have to be runner-up to the National Book Award winning biography of Cornelius Vanderbilt by T.J. Stiles, a book so wonderfully written, I completely forgot it weighed about a dozen pounds. 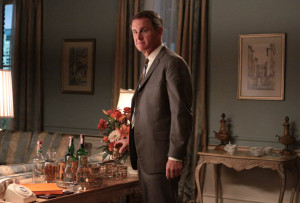 They’re made men: Swell cocktails at the Hotel Pierre

Depictions of New York history didn’t fare so well in movies this year. A fictional 80s New York was obliterated in the Watchmen movie (although not as satisfying as it was in the original graphic novel.) Frank Lloyd Wright’s Guggenheim Museum was shot to pieces in The International, and a true New York film classic, The Taking of Pelham 1-2-3, was itself mutilated with a mediocre remake. It might be worth watching the awful Night At the Museum sequel just to see the three-minute sequence that takes place in a black-and-white 1940s Times Square. On second thought, wait for it to pop up on cable next year.
For a more satisfying look at New York history in pop culture, you had to turn once again to Mad Men, the third season of which saw Don Draper’s job and marriage disintegrate, but not tragically so, in either case. As a result, it’s not surprising that the hints of the past fed to alert viewers were of midtown’s most glamorous hotels, most notably the Hotel Pierre, temporary home to the new Sterling Cooper.
And how great is it that the year ends with one of the most popular songs in the nation being an ode to New York nostalgia? If this blog had a theme song, it would have to be Alicia Keys’ version of her hit with Jay-Z, “Empire State of Mind“:

1 reply on “From New Amsterdam to Alicia Keys: NYC history in 2009”

Great summary! Loved the Manahatta Project and enjoyed the fireworks for the 100th birthday of the Manhattan bridge. Couldn´t agree more, especially about The High Line and Alicia Keys (who needs Jay-Z?). Might get to read Edward Rutherfurd, even if it is over 1000 pages. Wishing New York City (and the Bowery Boys) a great 2010!