PODCAST The Staten Island Ferry is one of the last remaining vestiges of an entire ferry system in New York, taking people between Manhattan and its future boroughs long before any bridges were built. In Staten Island, the northern shores were spiked in piers, competing ferry operators braving the busy waters of New York harbor.

In the first of our summer-long podcasts BOWERY BOYS ON THE GO on New York public transportation, I look at the history of Staten Island’s famous ferry, its early precursors, its connection to Cornelius Vanderbilt and a Monopoly property, and its evolution when the city took it over in 1905.

ALSO: Find out the curious story behind the name of Victory Boulevard and the neighborhoods of St. George and Tompkinsville.

From an old postcard, illlustrating why the Staten Island Ferry has become more than just a way to get to and from work. [NYPL] 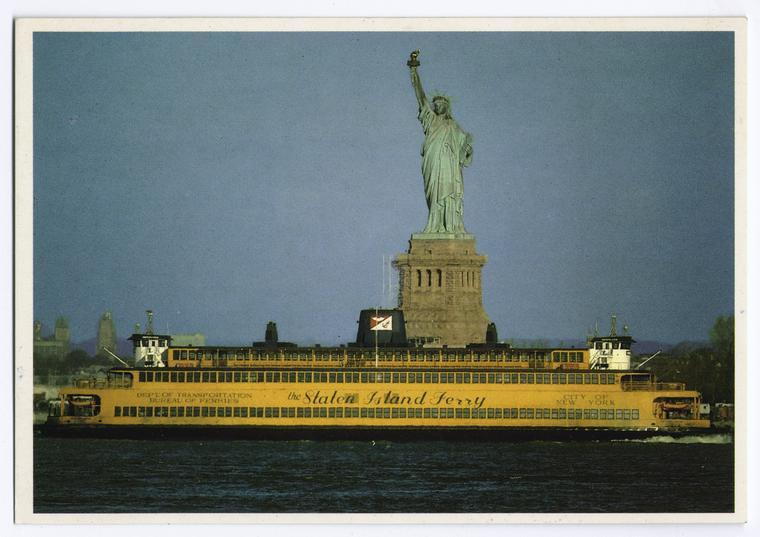 The Clermont in the waters of New York Harbor, 1807. Robert Fulton’s first steamship would revolutionize travel and change the rules of the ferry game. The first steamship off Staten Island waters would be the Nautilus in 1817, property of Daniel Tompkins. This Nautilus should not (obviously) be confused with Fulton’s famous submarine of the same name. Although the boat seems to have inspired a building, called Nautilus Hall, on Tompkins’ property. [Courtesy Gerald Massey] 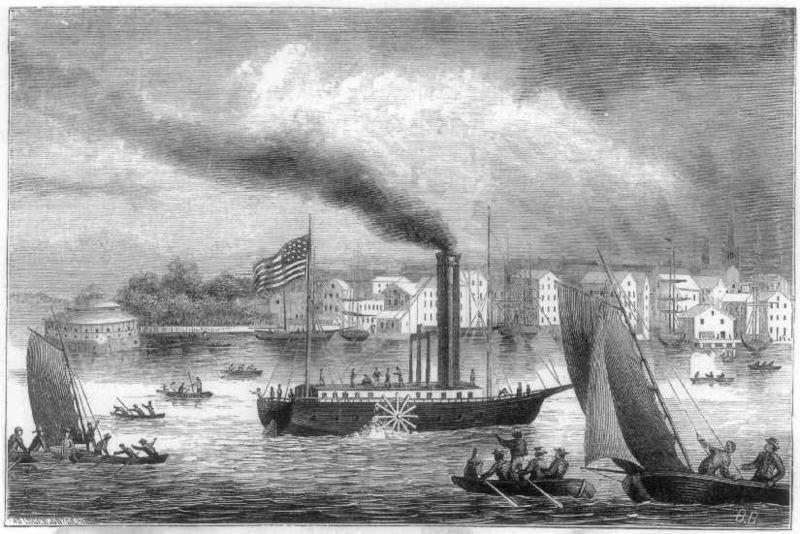 One of the earliest known photographs of a “Staten Island Steamboat”, taken in 1858 and about to chug by Castle William on Governor’s Island, one of “Anthony’s Instantaneous Views” from the George Eastman House archive.

This is a detail from an 1874 map of Stapleton and Clifton along the northeast shore of Staten Island. The area in green along the waterfront is Vanderbilt’s Landing, at least the southern part of it. You can also find the Vanderbilt estate nearby. For a closer look, check out the map directly on the NYPL site and use the zoom in/out tools. 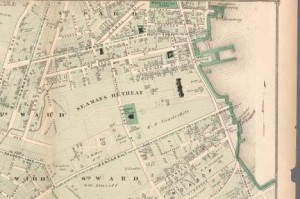 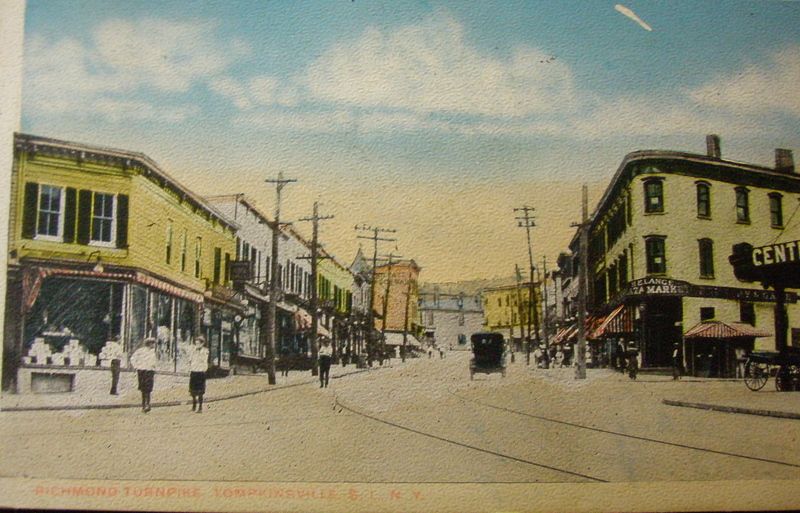 The Westfield disaster on July 1871, a boiler explosion that killed over 80 people, underscored the risks of early steam travel in the crowded waters of New York harbor. It remains the worst of several disasters in the Staten Island ferry’s long history. 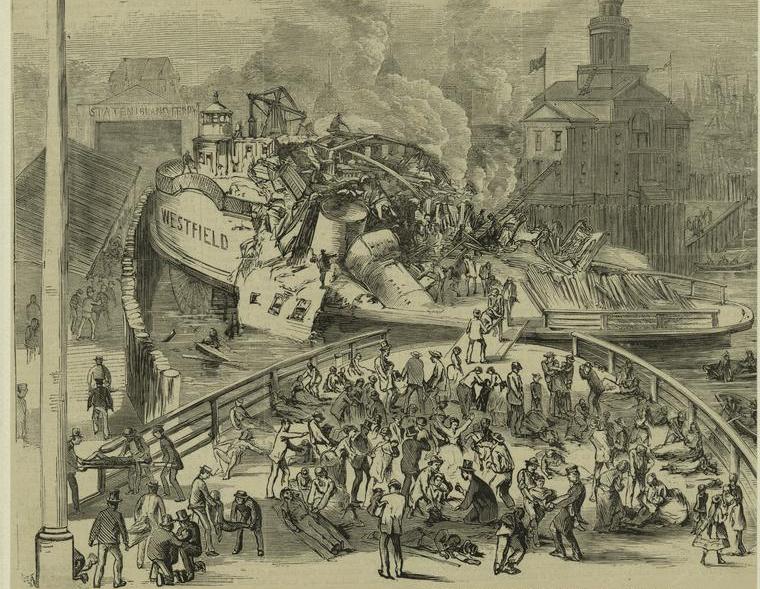 Named for George Law, the neighborhood of St. George was a bustling entertainment district, with hotels, light amusements and sports venues. This postcard is from 1886, illustrating the new St. George Cricket Grounds, built by developer Erastus Wiman. 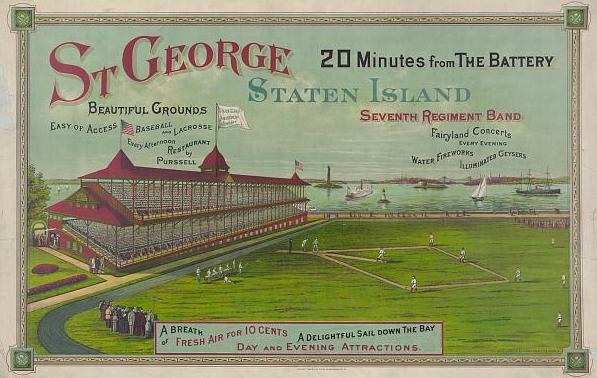 When the city took over operation of the Staten Island Ferry in 1905, they commissioned five new boats, each named for a borough. Here’s the Manhattan: 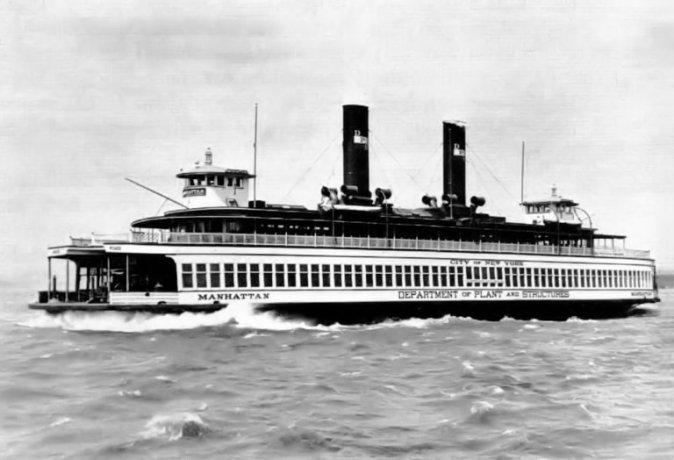 You used to be able to take your automobile on the ferry, as late as 2001 in fact, when due to security fears, vehicles were prohibited. Photo below 1963. [Magnum Photo, Leonard Freed photographer] 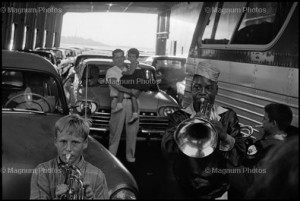 If you want to thumb through a spread of old photographs of prior ferryboats, check out this great site.

4 replies on “The Staten Island Ferry: its story, from sail to steam”

“It was so hot today, the Staten Island Ferry took off its slip.”

I remember taking the ferry with my Dad – we’d drive on, go to Staten Island, do stuff and ride it back. It’s a shame that cars are no longer allowed, it saved a lot of time and money to get the island. Freedom for security? how embarrassing.

It was not just for security reasons, people would forget they drove their car on the boat, then a tow truck would have to tow them off. I wish they would allow cars on again, at least on summer weekends.