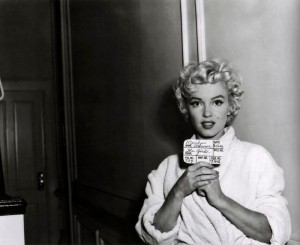 Monroe on the New York set of ‘The Seven Year Itch’, the film version of a Broadway box office success.

The heavily-hyped ‘Smash‘ debuted last night on NBC, a glossy musical-drama unspooling the backstage tribulations of a new Broadway musical based on the life of Marilyn Monroe. Although Monroe was once married to one of Broadway’s greatest playwrights (Arthur Miller) and personally coached by the stage’s most renown drama coaches (Lee and Paula Strasberg), she never hit the legitimate stage herself.

I’m surprised this ‘Marilyn Monroe musical’ idea is taken as such a revelation in the show. Many of Marilyn’s big cinema breakthroughs were plucked from Broadway shows, and her film resume has even inspired a couple Broadway musicals:

The Role: You would hardly call the Oscar-winning ‘Eve’ a true Marilyn movie, although her brief scene as Miss Caswell is indeed a memorable one. For the Betty Compton/Adolph Green musical adaptation, her role was entirely deleted. People were too busy lavishing praise upon Lauren Bacall, stepping into the Bette Davis role, to notice.

The Role: Believe it or not, the role of Lorelei Lee on Broadway was originated by a young actress in her first starring role — Carol Channing. That role would define Marilyn’s sophisticated sexpot image in the Howard Hawks film edition.

And then: A quarter century later, Channing returns to Broadway in a re-tinkered version of ‘Blondes’ called ‘Lorelei‘. It was actually a bigger hit, in part to the genius lyrical contributions of ‘Applause’s Compton and Green.

The Role: When it arrived on film, the role of ‘The Girl’ gave us this iconic Marilyn image. It unfortunately had less effect on the career of Austrian-born Vanessa Brown, who originated the role.

Also in the Broadway cast: Tom Ewell, habitue of Sardi’s Restaurant, who played opposite Marilyn in the film. Anybody looking for him could find him parked at Sardi’s ‘little bar’.

The Role: Kim Stanley played the role of ‘Cherie’, Marilyn played a variation the following year, in a film loosely based on the stage play
Also in the Broadway cast: An Elaine Stritch so scrappy she was nominated for a Tony

The Role: The musical debut of Marilyn’s greatest film role was played by Elaine Joyce, later a popular television personality and best known, in some circles, as being the obsession of writer J.D. Salinger.


I couldn’t find any video of Joyce in ‘Sugar’, so enjoy this clip of her on ‘Match Game’ instead:

Another Marilyn Monroe musical film, ‘There’s No Business Like Show Business’ (1954), isn’t based a stage musical at all, but took its title straight from a song in the Broadway musical ‘Annie Get Your Gun’ (which debuted in 1946)